With the View 10, Honor has delivered its latest salvo in the battle against other mainstream manufacturers and the results are very compelling.
Rating:

Honor, Huawei's sub-brand, has been producing some good phones across all categories with plenty of 'bang for your buck', and now the company is betting high on handsets that can harness the power of artificial intelligence (AI) to drive advanced features for its users. With the View 10, Honor has delivered its latest salvo in the battle against other mainstream manufacturers and the results are very compelling. Not only does it embrace last year's bezel-less trend, it also comes powered by a dedicated NPU chip, which is specially tuned to enhance the AI experience.

The View 10 is Honor’s most impressive smartphone yet after the Honor 8 Pro, which was launched earlier in 2017. Honor’s path to dominate the flagship segment and steal the crown from its rivals isn't as easy. On paper, the Honor View 10 ticks all boxes for a flagship title, but does the build and performance merit it being categorised as a flagship device similar to the likes of the Oneplus 5T, Xiaomi's Mi Mix 2 and other similar handsets. 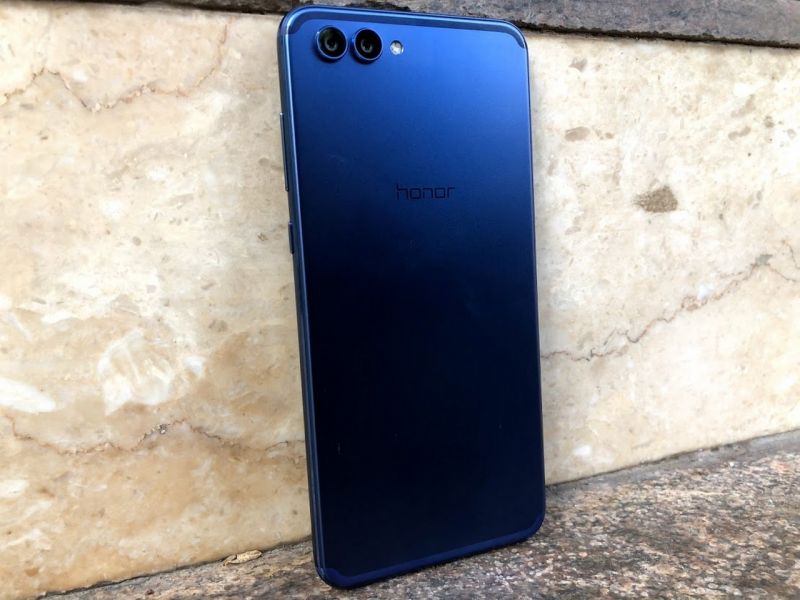 Before diving deep into the Honor View 10's AI magic brewing under the hood, let’s first take a look at its design.

The View 10, at first glance, essentially looks like a blend of its stablemates. The handset sports a seamless metal design, which looks great with a premium finish and feels solid to hold. The blue variant which we received for a review is quite a head-turner too. However, a new design language could have given the handset a differentiating factor. The smartphone looks elegant and is comfortable to hold — thanks to the neatly rounded corners. 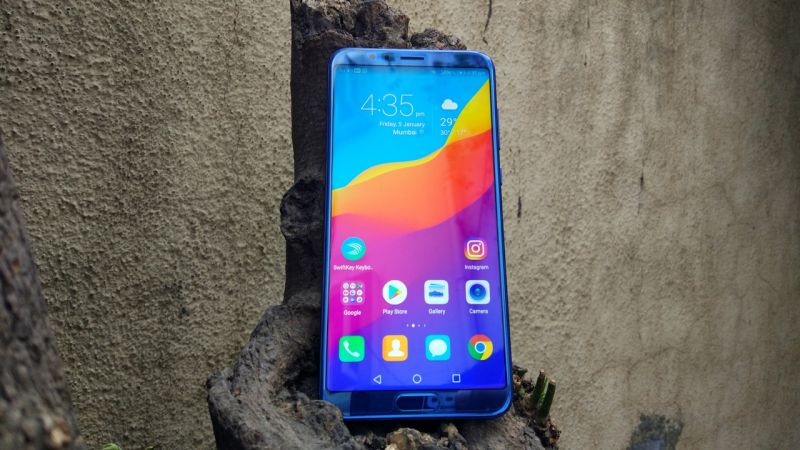 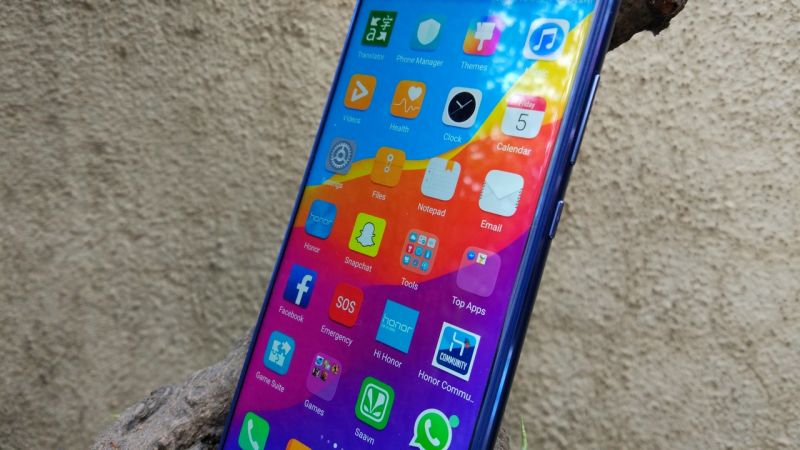 The View 10 flaunts a 5.99-inch LCD full HD+ display with a 1080x2160 pixel resolution and an aspect ratio of 18:9, shrinking the surrounding bezels — a norm these days. What's surprising here is that the fingerprint sensor has made its way from the rear onto the front, found nested below the display. This is probably a better place as compared to the rear taking ergonomics into the picture. 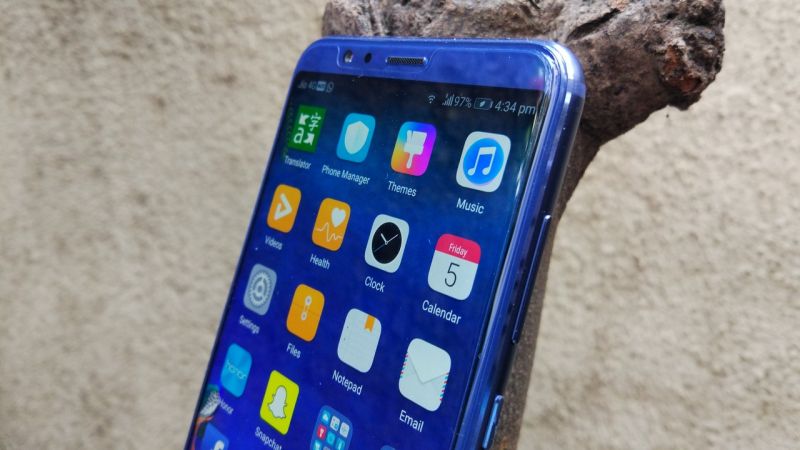 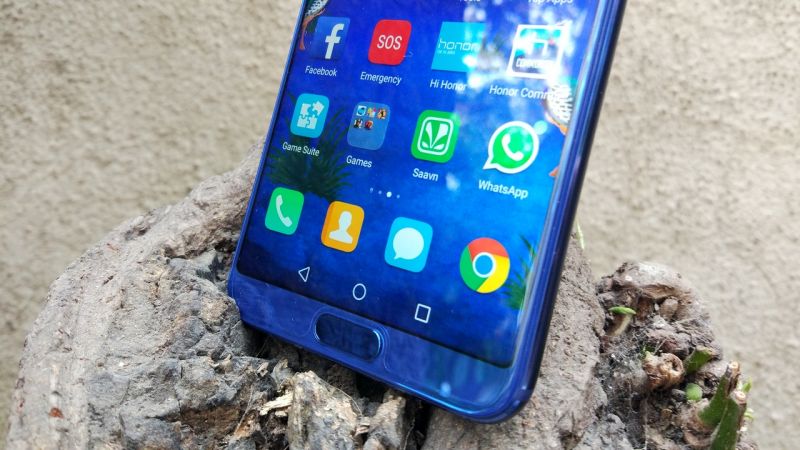 As for the display, the viewing angles are great, colours are bright and vibrant, the colour temperature looks almost accurate with adequate brightness levels. Sadly, the display panel lacks a Corning Gorilla Glass protection — the company states this elimination as a reason for keeping the price lower. However, Honor has provided a screen protector pre-installed on the display as a protection, out of the box.

The dual camera bump on the rear panel looks really cute — just like a Minion peeping at you. The only qualm we had with the device is that the camera protrudes outwards a bit too much, which could result in scratched glasses in the long run. 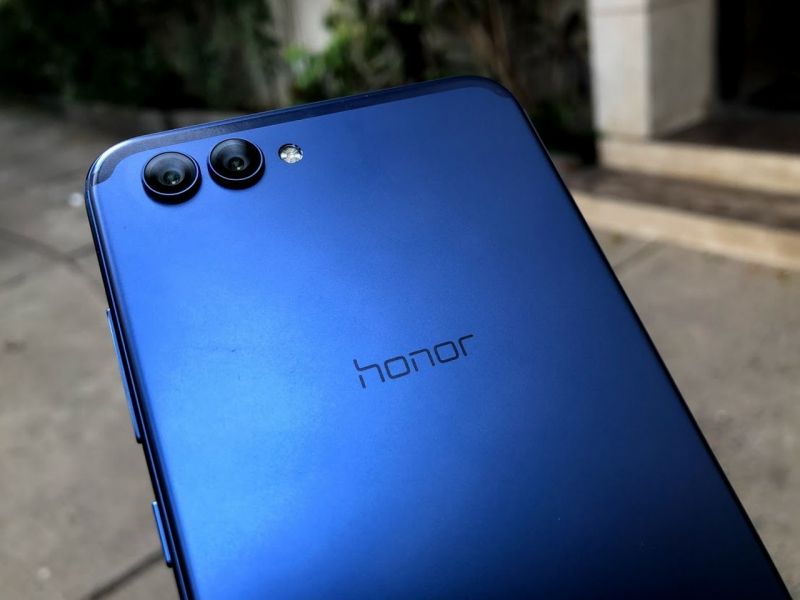 A speaker grille and USB-type C port occupy the bottom edge, while an IR blaster and a secondary microphone reside on the top. Despite the extremely slim chassis (7.5mm), Honor has managed to squeeze in a 3.5mm headphone jack, which receives a thumbs up from our end. 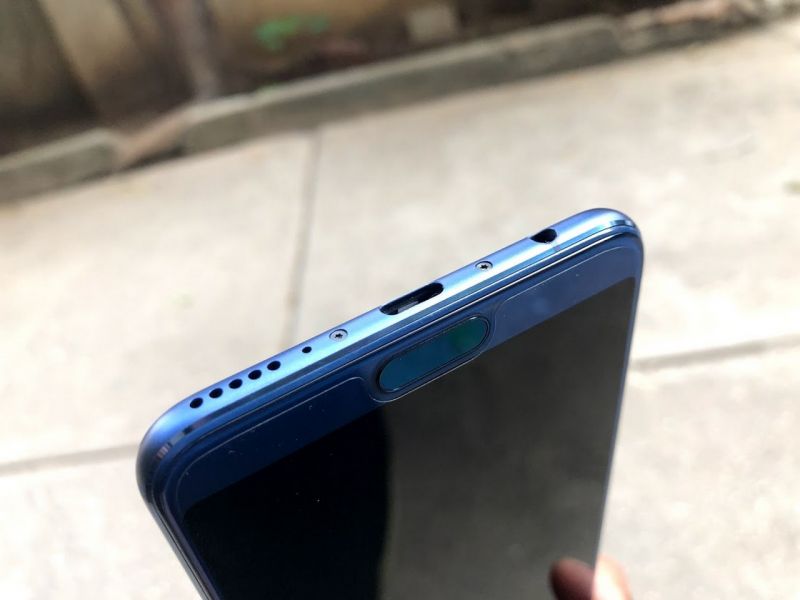 What sets the Honor View 10 stand out in the crowd is its home-brewed Kirin 970 chipset packed with AI-based NPU which serves as the centre of its nervous system. This is the same brain found powering Huawei's Mate 10 series and is the company's most ambitious chipset to date. The Kirin 970 is being touted by the company for being the first ‘artificial intelligence smartphone' chipset. The magic of AI is varnished on every aspect of the phone's UI. 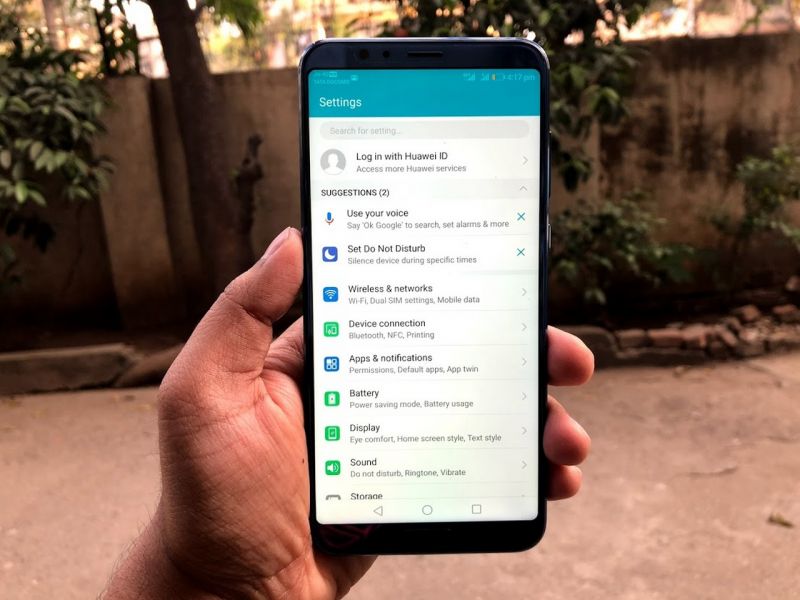 Moving ahead, a few online recent reports revealed that the Kirin 970 chipset has managed to beat Qualcomm's present flagship chip, the Snapdragon 835. Thankfully, all that power translates well into the real-life context. The Honor View 10 seems blazingly fast and here we are talking about flagship-level performance. We used the phone for almost two weeks, grilled it and were pretty impressed by its performance. The View 10 handled everything perfectly — from casual usage to rigorous workload, we never witnessed any lags or sluggish behaviour. Apps running in the background does not affect new loaded apps in anyways. App loading times are also quick — thanks to the powerful internals. Gaming was quite a pleasurable experience and the performance seemed really good. The View 10 seems like a perfect everyday smartphone that can handle daily tasks and high intense graphics games with ease. Adding to the quick experience, the fingerprint sensor on the device is also blazingly fast.

Moving ahead, Honor's own custom UI, EMUI 8.0, a fork of Android 8.0 Oreo, powers this phone from within. EMUI 8 is pretty refined as compared to the previous versions we have used so far. Honor has done a commendable job cleaning up EMUI — smoother than previous iterations. However, what one would usually prefer is a stock-Android-like user experience for its speed and performance, which Honor should aim for. 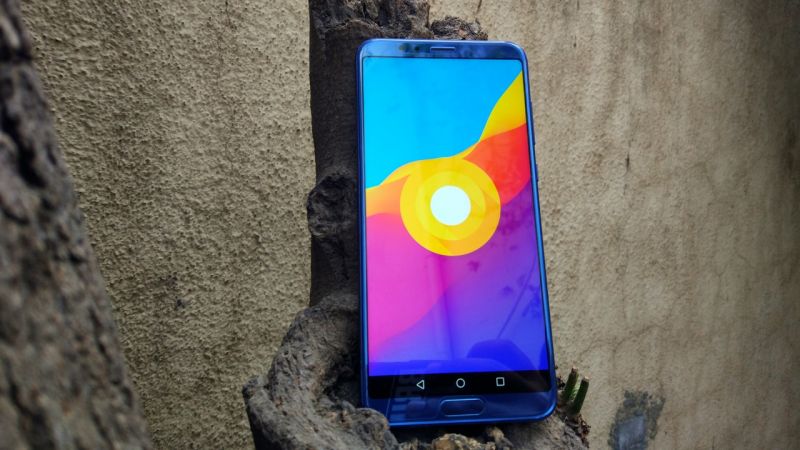 Besides, the Honor View 10 also offers some features stored under its sleeves. Honor has partnered with Microsoft for an AI accelerated translator. The company claims that the application uses the Kirin 970's Artificial Intelligence capabilities to offer near-instant translations in around 50 languages. While the voice translation is left much to be desired, the app's text translation feature worked well. If Microsoft isn’t your cup of tea, Google's Translate is in the pipeline as well. With this phone, users can reject, make and answer calls with your voice. However, this feature is still immature as it is not as accurate as required.

Honor has also added a smart split-screen mode so that users can operate dual apps at the same time. A private space option is also available that allows users to create an alternate profile (accessible only through a specific fingerprint or a pattern) which is otherwise entirely hidden from prying eyes. Everything, including apps, settings, accounts, etc, is sandboxed in each user profile; similar to having multiple user profiles on a PC. 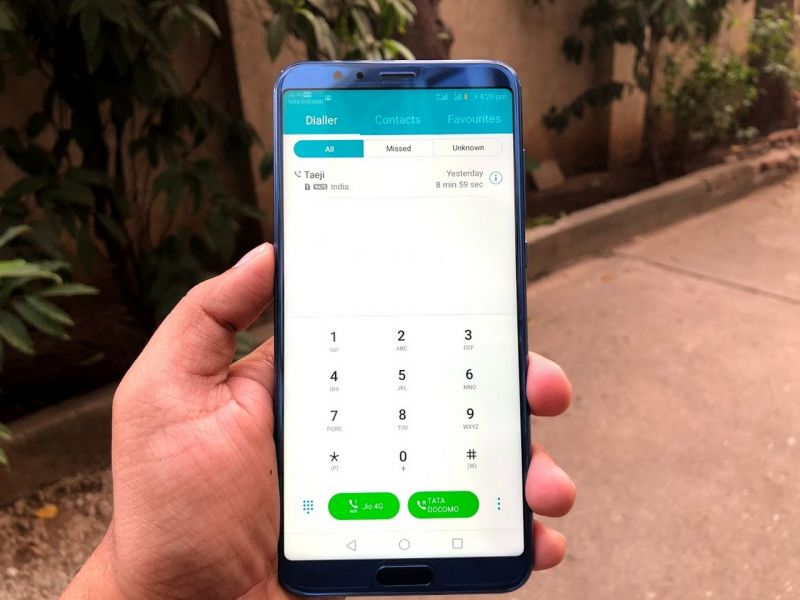 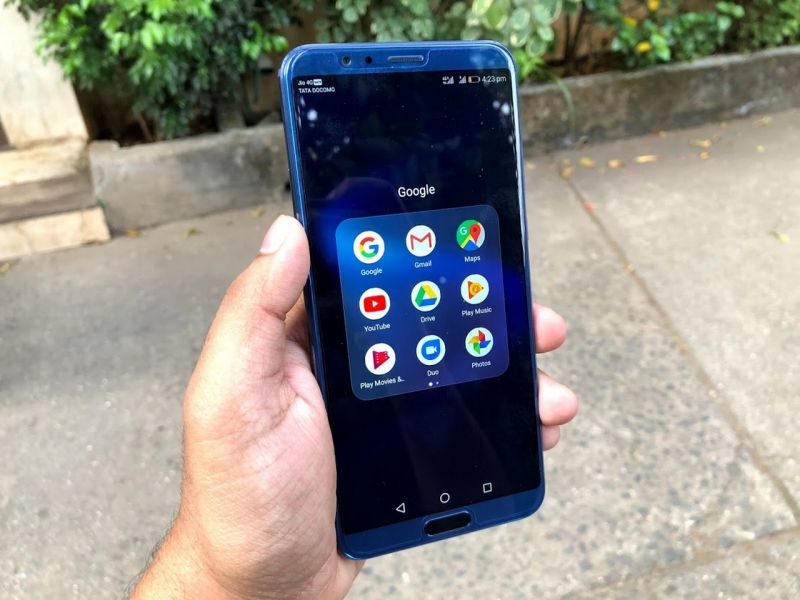 The View 10’s camera UI tied with AI is Honor's crowning glory. The handset comes with a dual-camera setup with f/1.8 apertures — it has a 16MP RGB sensor that captures colours in detail and a 20MP monochrome camera that fills out the rest of the details in an image. The View 10’s camera performed above expectations in every situation — as far as our usage is concerned. Photographs shot turned out great — sharp, crisp, vivid and detailed. Colours seem rich, and one could see a good exposure balance between the brightly lit and shadowy foregrounds in daylight shots. In low light images, the camera doesn’t fail to impress. We must admit that the dual cameras capture enough details to ensure crisper, well-detailed images. 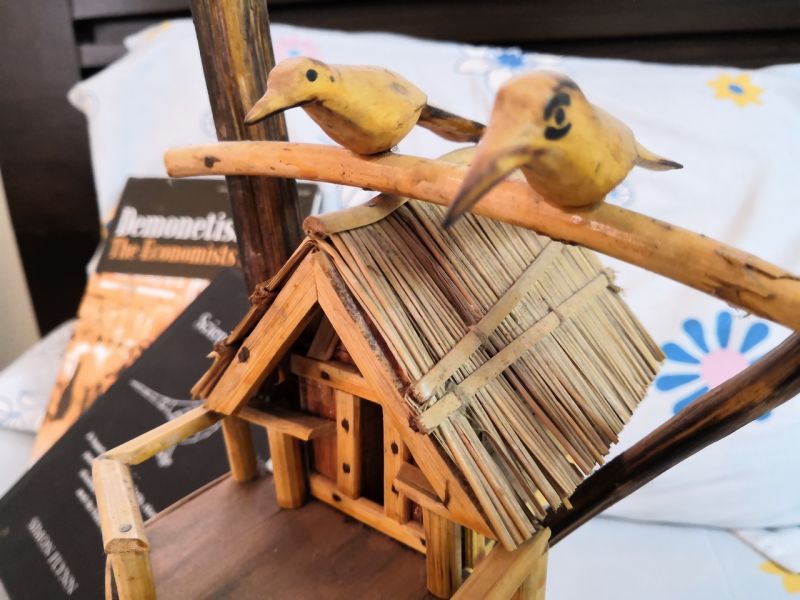 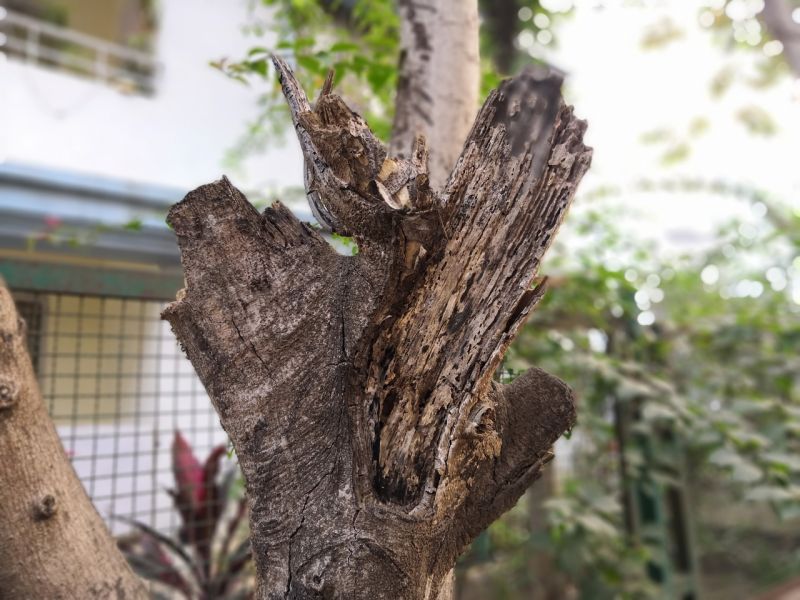 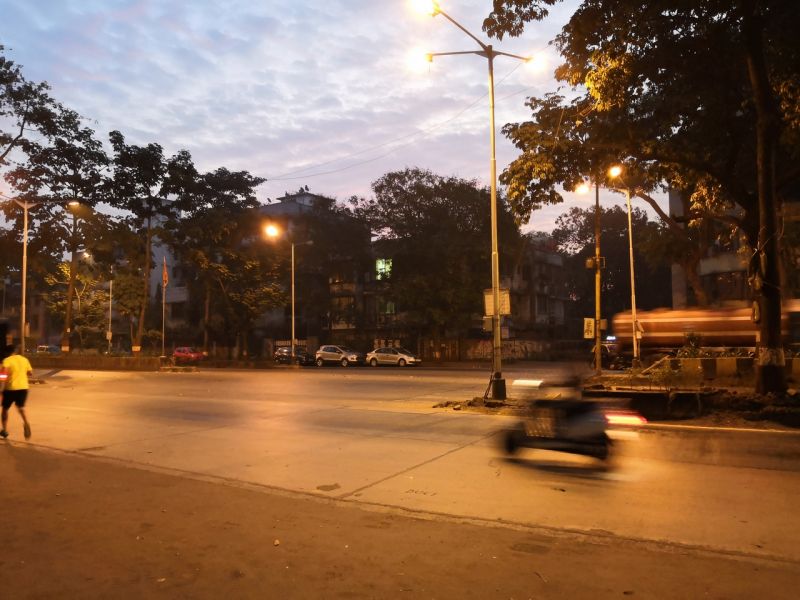 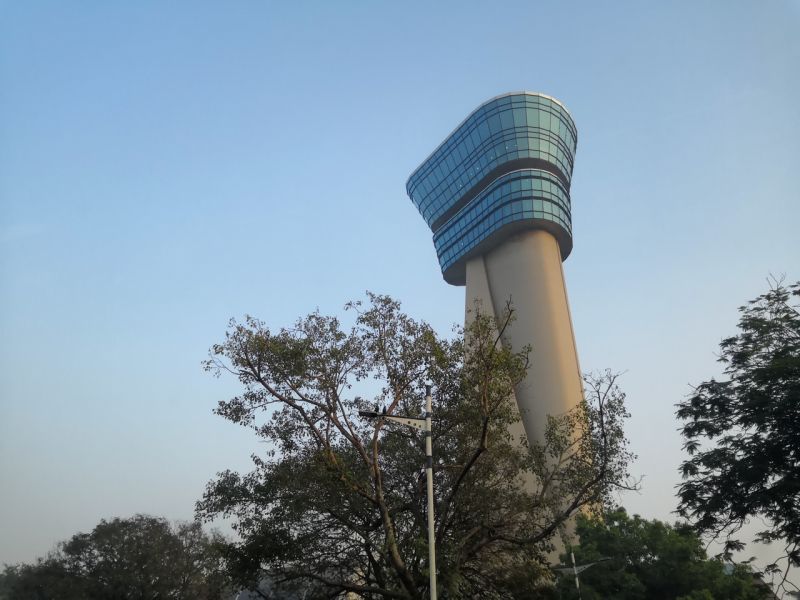 The View 10 is definitely capable of giving rival high-end smartphones a run for their money. The phone intelligently detects the image, along with your framing and optimises the required settings accordingly so that users don't need to tweak the settings for the best result — thanks to the built-in hardware AI, this is done within microseconds. The dual cameras also manage portrait shots with great ease. Black and white photos also turn out great with deep black levels leaving a rich contrast which will relieve users from post-processing. 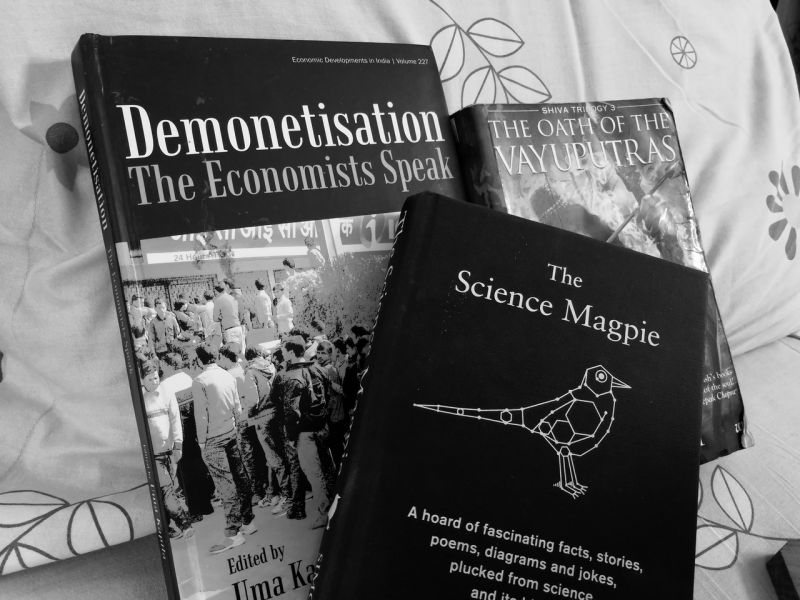 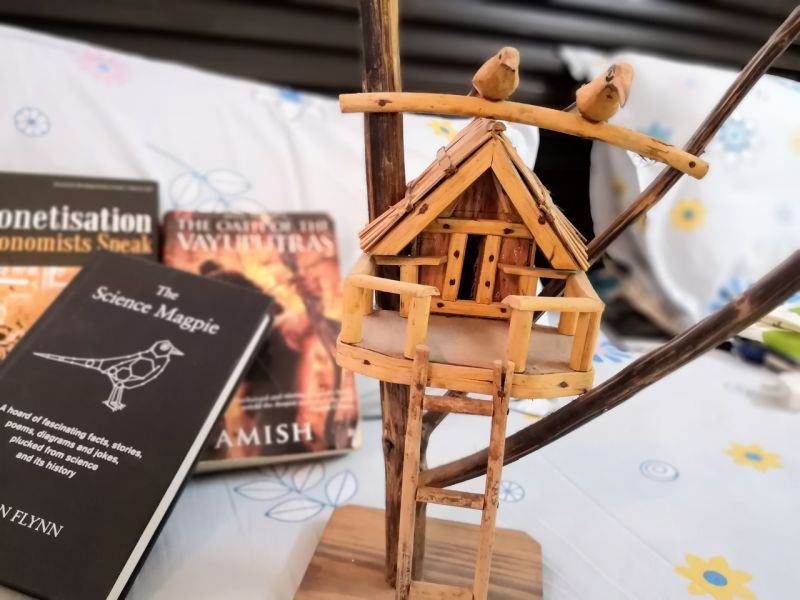 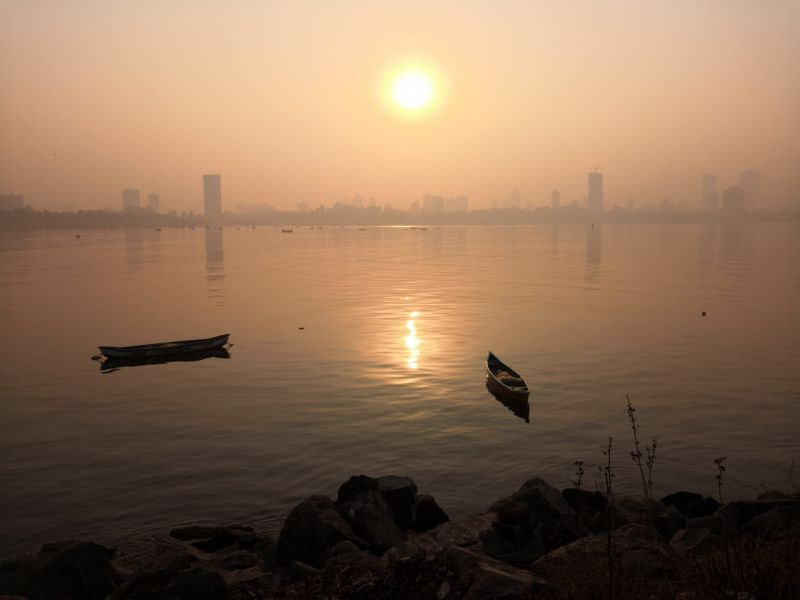 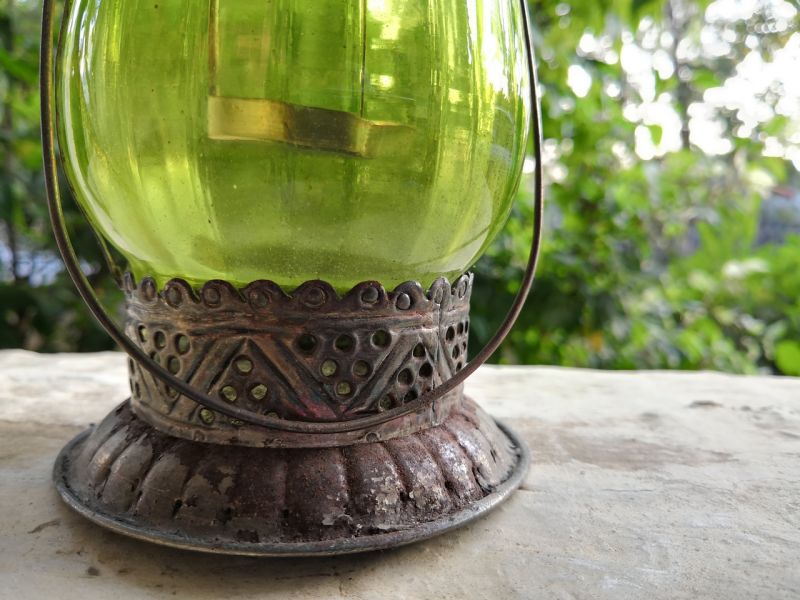 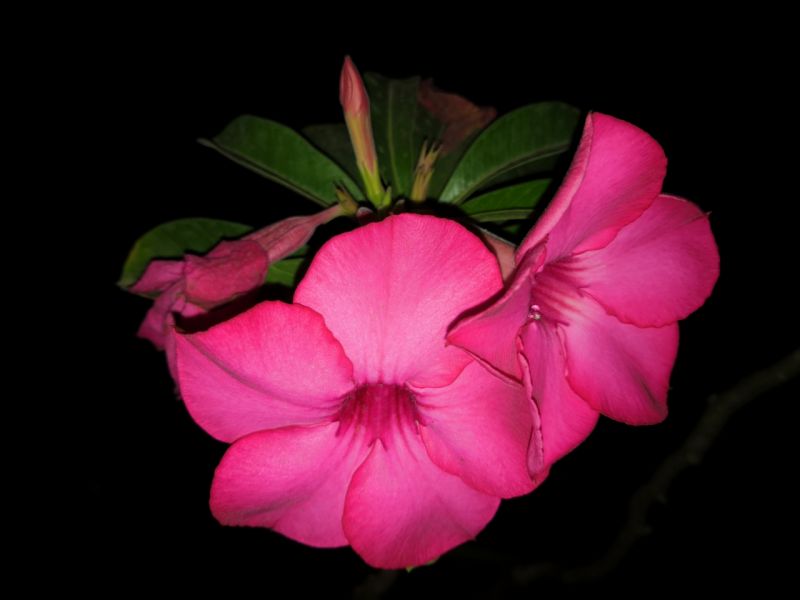 The View 10 makes heavy use of the hardware AI chip (NPU) for object recognition. It does this by tuning the exposure parameters when it identifies objects and subjects. For example, the camera recognises subjects such as cats, dogs and human faces and objects such as plants, flowers, printed text and a lot more to automatically tweak the settings for the best colour, contrast and ISO speeds required for the type of frame. 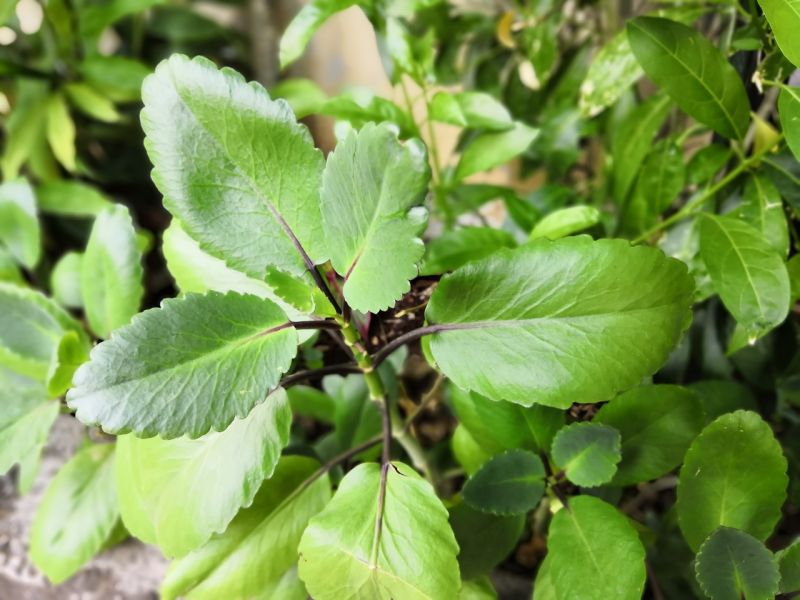 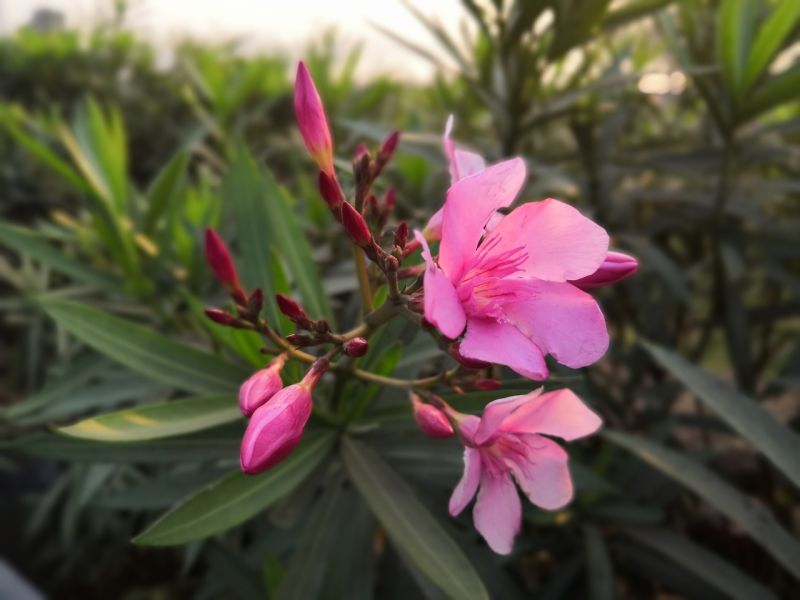 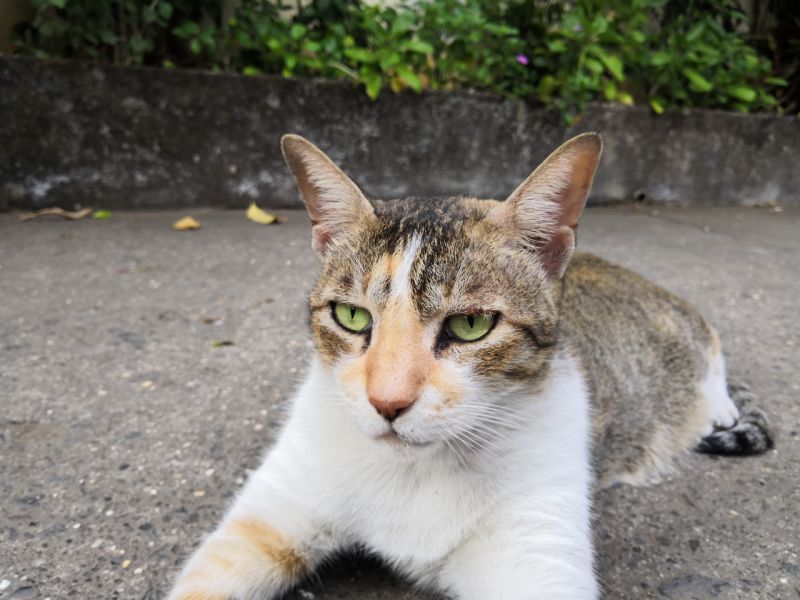 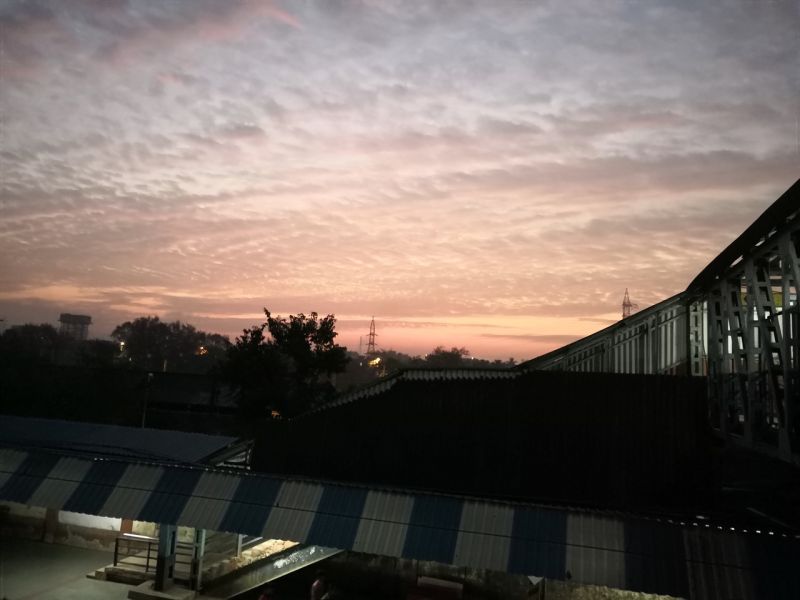 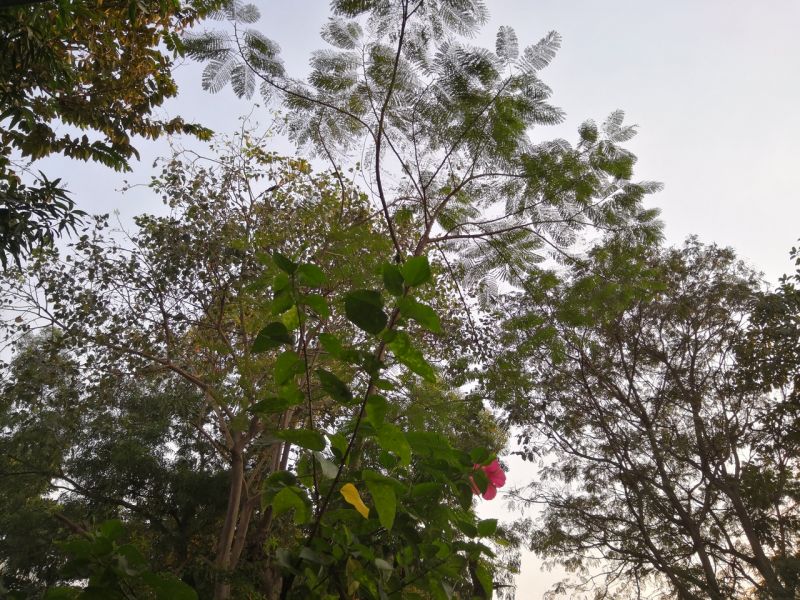 The camera also comes with in-built AR features for adding live stickers to a person’s face — similar to Snapchat, Instagram or Google Lens. The camera also offers artistic mode, so if you are into your moody artistic monochrome portraits, the View 10 will suit you well.

Honor has an added Facial Recognition feature, which is meant for privacy at the moment. Though it could be used for unlocking the phone (similarly found on the OnePlus and Apple flagship handsets), the company has not yet released the new firmware for the same. Honor will be releasing an update which will enable face to unlock in a few days post the official India launch. At present, the facial recognition can only be used to keep notifications on the lock screen private (similar to how the iPhone X functions).

The 13MP selfie camera also does a good job of capturing your grinning selfies. There's beauty mode, which smoothens imperfections in your skin. But the images taken from the front don’t have impressive details though. It works well in low light conditions and you get the picture perfect photograph, but the face gets brightened a tad too much. You can set the default levels a bit lower to reduce the beautification mode to your satisfaction. 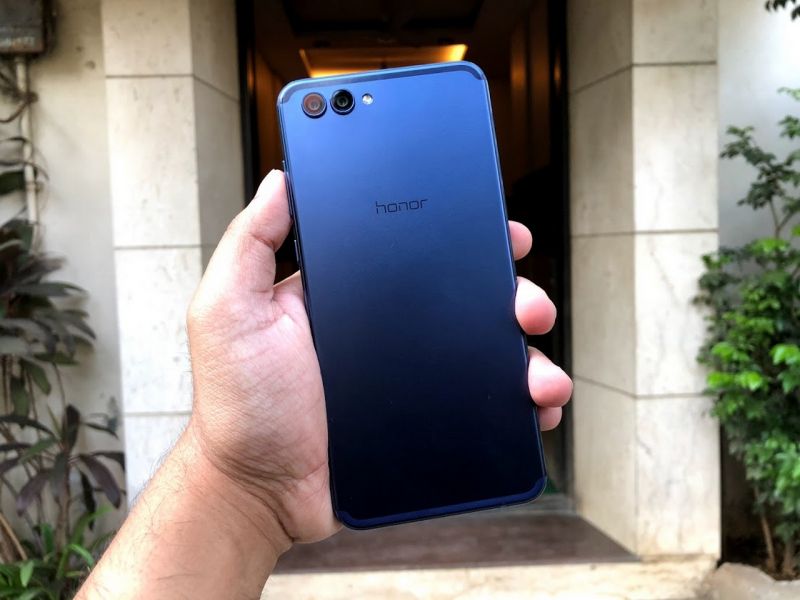 The View 10 has an impressive battery life too. A 3750mAh battery gets juice up in about one and the half hour and manages to power the phone for almost two days, depending on the usage. Intensive use — movies, games and alike, will still help you run through the entire day without hunting for an emergency power source. The smartphone supports Supercharge technology using the 4.5V/5A power brick bundled with the phone. With this charger, you can fill the battery up to 60/70 per cent within an hour, sufficient to use for the entire day. The View 10 also includes battery management that allows you various options for saving power and increase your battery life.

It seems that the company was on a hunt for a game-changing device that could not only seize the mindshare but also flies off the shelves like hotcakes and the Honor View 10 could be that one. The Honor View 10 is a feature-rich phone that offers more than the competition on paper.

With one of the best chipsets in the house, stellar camera performance, good build quality and backed by artificial intelligence, all within a slim chassis, the Honor View 10 is definitely a smartphone to consider as your next daily driver. Priced at Rs 29,999, the View 10 is destined to kill the competition and disrupt the high-end smartphone segment, probably sending the rivals back to the drawing board.