ASUS Zenfone Max Pro M1: Does the 6GB variant improvise on the 4GB?

Apparently, it not only attempted to hike the camera quality but also aspired to improve the performance with bigger RAM.

The midrange smartphone segment is where a majority of Indian smartphone seekers delve for an offering that justifies the term ‘value-for-money.’ ASUS entered into this territory with its highly potent ZenFone Max Pro M1 a few months ago and goes head-on against the widely popular Redmi Note 5 Pro. At the time, ASUS unveiled only the 3GB/4GB variant and promised a better-equipped variant in the coming months. While the standard variant impressed us in almost every aspect, it left us wanting for more in the camera department. Its 13MP/5MP rear setup and the 8MP selfie shooter weren’t as good as the Redmi Note 5 Pro’s camera.

ASUS could have carried on as it is but apparently the company believes in improvement. The outcome? An improved variant of the ZenFone Max Pro M1 with scaled up cameras (front and rear both) along with the 6GB RAM comes to ASUS' help. Not only does it promise to hike the camera quality but also aspires to improve the performance with more RAM. However, before we make any conclusion about the changes, let’s see what improvements have this fortification bestowed on the phone. 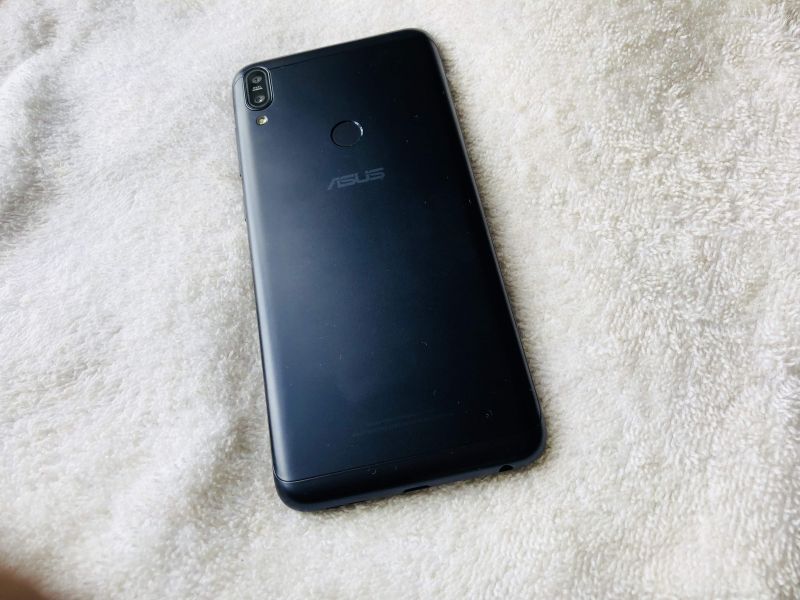 Camera — Better than before?

We already had used the 3GB variant of the ZenFone Max Pro M1 extensively and you can read about our experience here. Since not much has been changed in the 6GB variant, we directly jump to the element which went through an overhaul — the optics.

The rear camera of the new 6GB variant is a combination of 16MP+5MP sensors which offer a vast improvement as compared to the 13MP+5MP combination both on the 3GB and 4GB variants. Check the results for yourself. 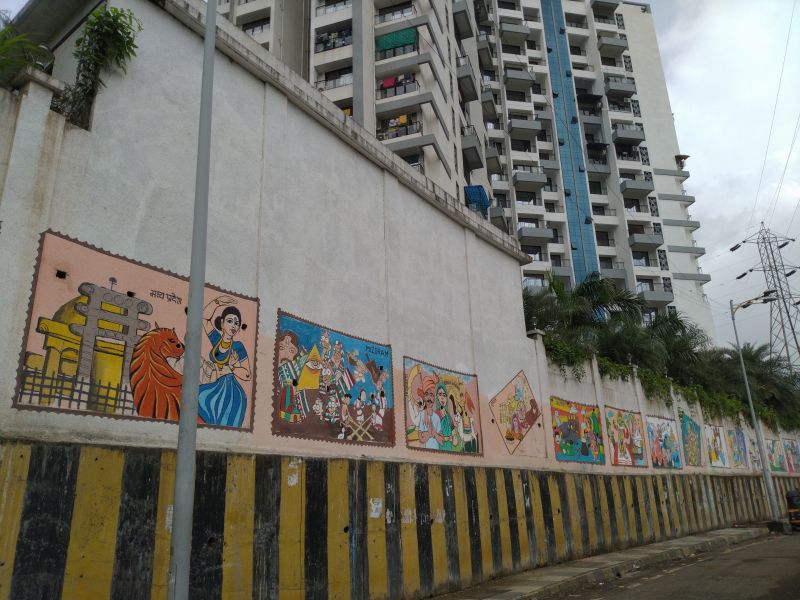 6GB variant: The colours are more natural, with details maintained throughout the entire photo. 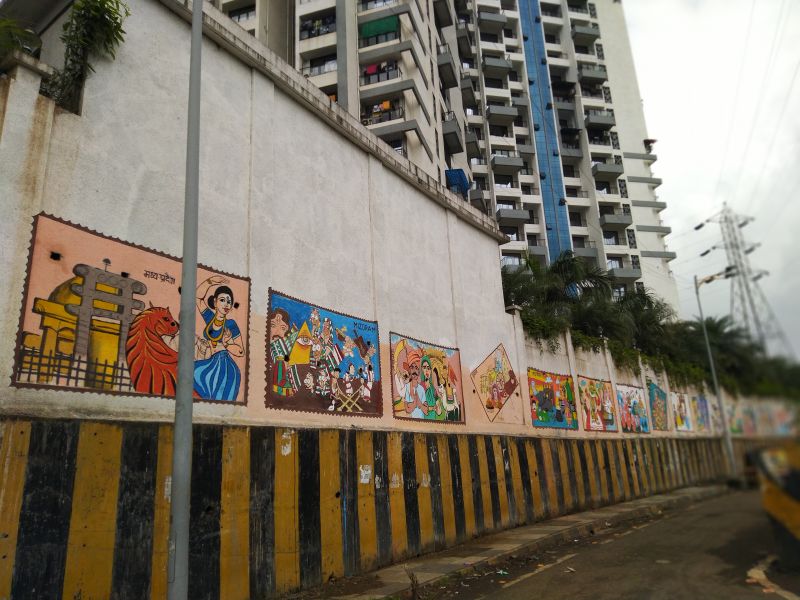 3GB variant: Colours are a little unnatural and looked enhanced, details aren't as sharp in comparison.

The first thing to notice was the colour reproduction of the pictures taken from the new variant which was more natural as compared to those taken from the older one. The latter seems to artificially enhance the colours and while doing so, it loses a considerable amount of detail which we found while zooming in on the pictures. A closer look reveals that the 3GB version softens the corners of the subject, which the upgraded variant tackles with ease. The image on the newer model appears crisper and manages to handle exposures very well. 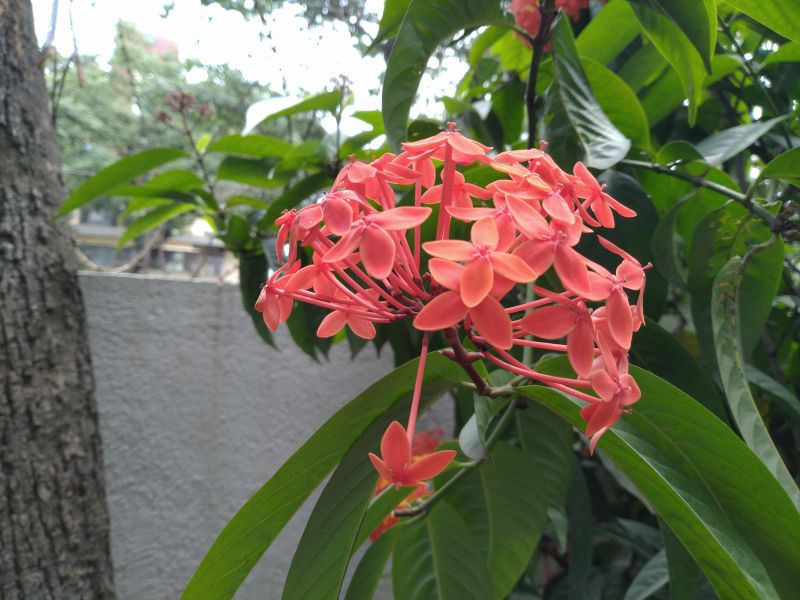 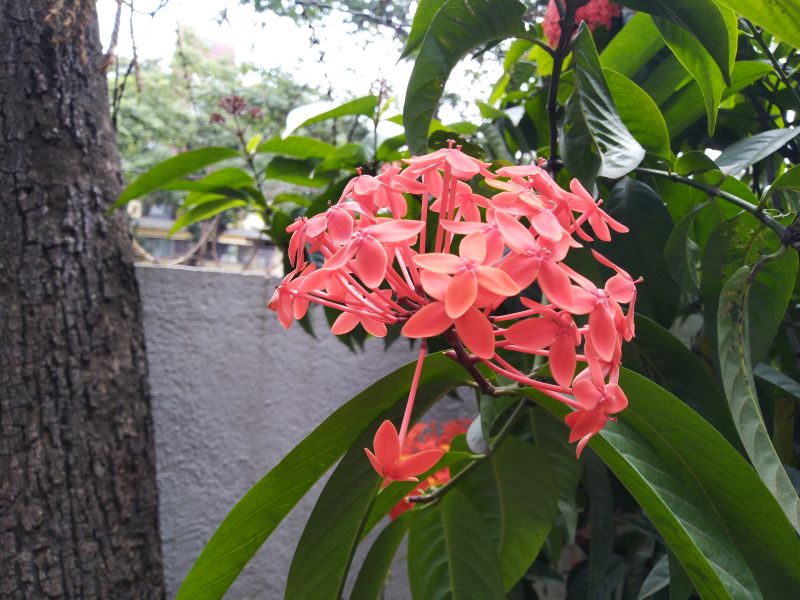 Prominent differences could be spotted after clicking pictures in low light, especially at night. It's noticeable that the new version clicks crisp images, renders better colours and, specifically, exposure is handled in a better way. In the photo samples below, the standard variant is seen smudging the street light across the frame while the one taken from the upgraded set up handles light well and maintains clarity of rest of the elements. The blue tint of the sky and green shade of the tree are also well retained by the new entrant. 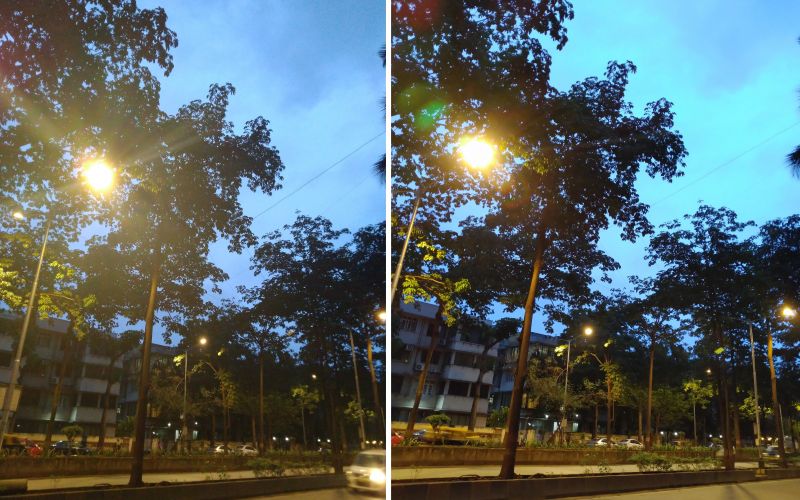 As can be seen above, the newer variant clicked sharper photos here as well (both the pictures were taken with full zoom). On the other hand, the 3GB variant generated a lot of noise and the details seemed lost. The depth effect feature is good for taking portrait shots which manages to blur the background while keeping the subject in focus.

The new variant of the ZenFone Max Pro M1 comes with the 16MP (f/2.0) front camera while the 3GB/4GB versions house the 8MP (f/2.2) unit. The newer sensor obviously shoots better selfies which you can see in the samples below. The higher-spec variant takes in more light (because of the difference in the aperture value) and the picture appears brighter as compared to the 3GB version 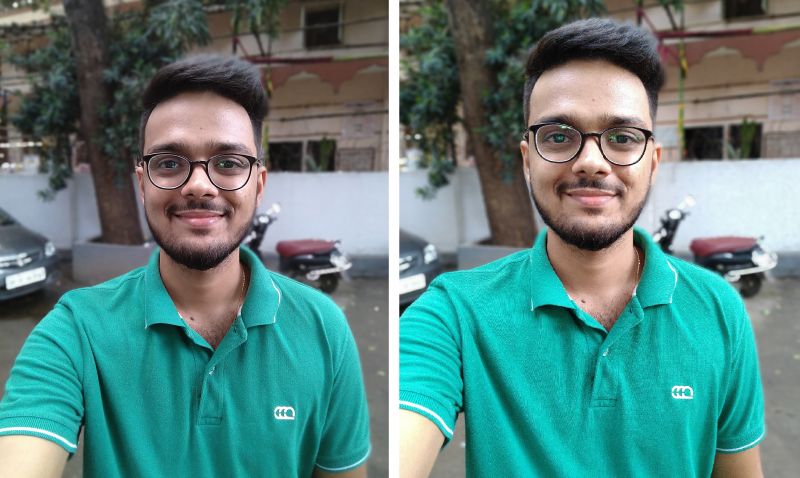 3GB (left) vs 6GB (right) Check out the sharpness in the face and clothes.

ASUS claimed to have improved the camera set up and now, after spending some time with both the old and new variants, we totally agree.

ASUS straps the ZenFone Max Pro M1 with a 5.99-inch full-HD+ IPS LCD display. And, the reason we mention this is because the display on the newer variant has slightly improved — surprisingly, ASUS is keeping mum about it. The 6GB variant seems to sport a tad brighter panel, which results in a slightly better outdoor legibility. 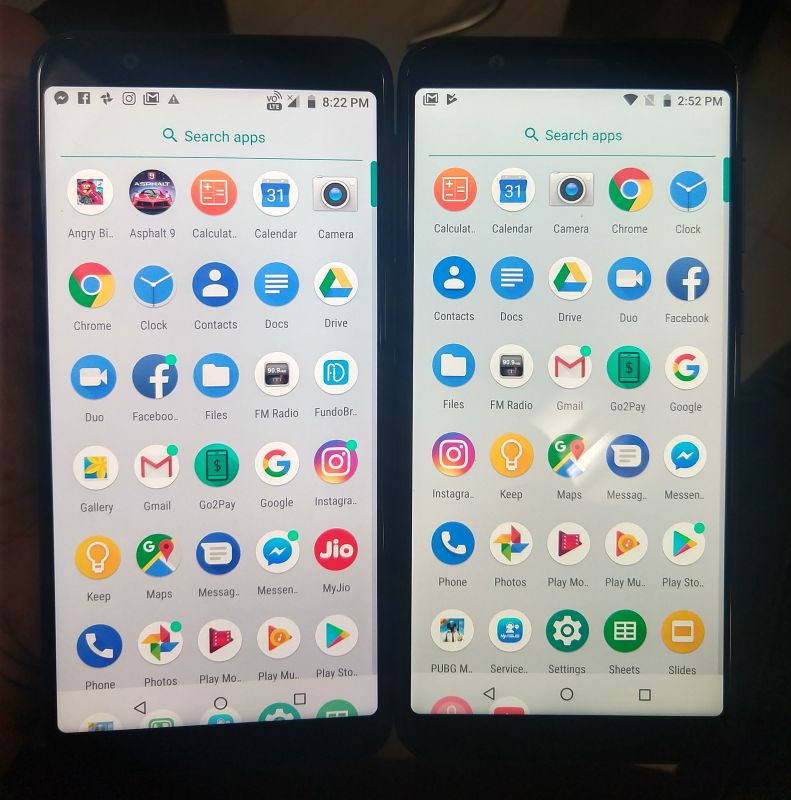 3GB RAM (left) vs 6GB RAM (right) The difference is not easily noticeable, but if you place the two handsets together, you could be able to tell them out.

The colour reproduction is equally good on both devices, but the new variant possesses a warm tint which is easy on the eyes. The viewing angles are as good as before and although the display on the standard variant was impressive for its price, this improvement from ASUS is admirable.

When it comes to core performance and handling daily tasks, the ASUS ZenFone Max Pro M1 manages to impress with the older setup itself. The RAM management on the 3GB and 4GB variants were good, but the 6GB model could hold even more apps in the memory. Even if you keep several applications open in the background, it doesn’t affect the fluidity. The Snapdragon 636 SoC works efficiently and never did it throw any tantrums while playing heavy gaming titles such as NFS and PUBG MOBILE on lower settings. 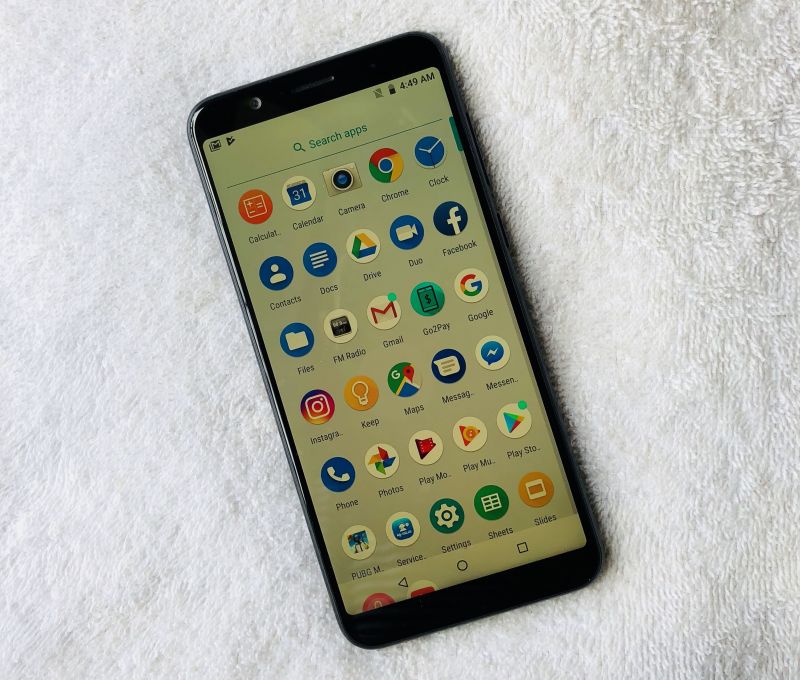 The Max Pro M1 still runs on Android 8.1.1 Oreo with a stock UI and that’s where it earns most of the brownie points. The interface feels fluidic with smooth animations or no bloatware involved. While it features the ZenMotion gesture shortcuts, it also offers Face Unlock for increased convenience. However, this feature struggles at several instances, especially when there isn’t ample ambient light and we relied on the fingerprint unlock all the time, which is naturally faster.

The bottom-firing speaker is also fairly louder and clear, but in case you wish to enjoy even higher audio, the bundled Max Box cardboard passive acoustic amplifier does serve the purpose. With the big 5.99-inch screen, which is bright, colourful and has nice viewing angles, and the impressive loudspeaker, this one could be a fantastic entertainment companion. 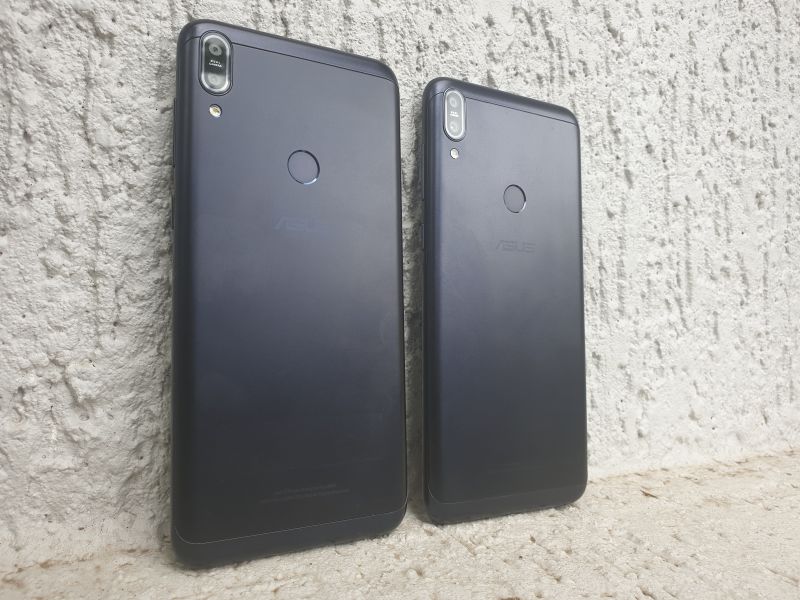 When it comes to looks and feel, the ZenFone Max Pro M1 is surely not the best-looking device out there but it isn’t bad either. It has the metal unibody build resting on a plastic chassis. The unit is a tad slippery too — thanks to the rear's smooth finish, owing to which a case is highly recommended. ASUS nobly bundles a TPU case to maintain the sheen on the device. The dual rear camera gels well with the body leaving no protrusion. However, smudges are visible if you don’t have a case on it. 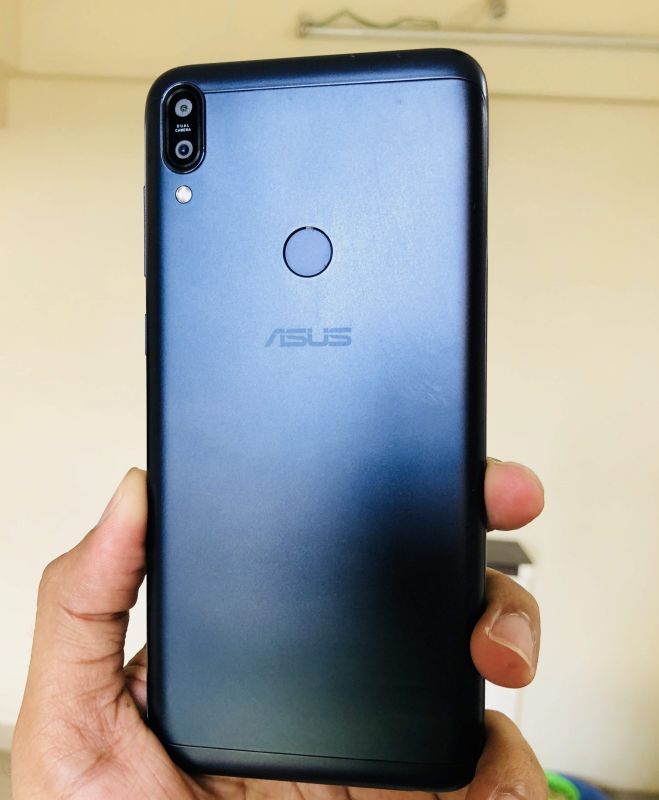 The ASUS ZenFone Max Pro M1 6GB RAM variant comes with the price tag of Rs 14,999 while those with 3GB and 4GB RAM are priced at Rs 10,999 and 12,999, respectively. But, the main question is – is it worth to put those extra dough for an upgraded variant? Yes, if you want better cameras, a better display and more RAM for enhanced multitasking. However, the latter doesn’t make a world of a difference if you aren't into mobile gaming — the close-to-stock Android experience on the efficient Snapdragon 636 SoC doesn’t fail to lend you a seamless usability on the base versions as well.