MS Dhoni was felicitated by former India captain Kapil Dev at the Eden Gardens during the innings break of the third one-day match against England.

Kolkata: Former India captain Sourav Ganguly finally joined the list of elite cricketers who have stands dedicated after them when the eastern block of the Eden Gardens here was etched in his name.

To name stadium blocks after popular personalities of that venue may be a common practice everywhere but it had been delayed at the majestic Eden Gardens as it was under lease from the Ministry of Defence, who owns the land.

Finally the hurdles were cleared and it became a reality when the black plates bearing Ganguly and former Cricket Association of Bengal (CAB) president Jagmohan Dalmiya names were illuminated in a formal ceremony during the innings break of third and final ODI between India and England.

Ganguly, who is also the current CAB president, occupied the C-Block to the right side of BC Roy Club House, while Dalmiya was immortalised on the left of it in the L-Block. 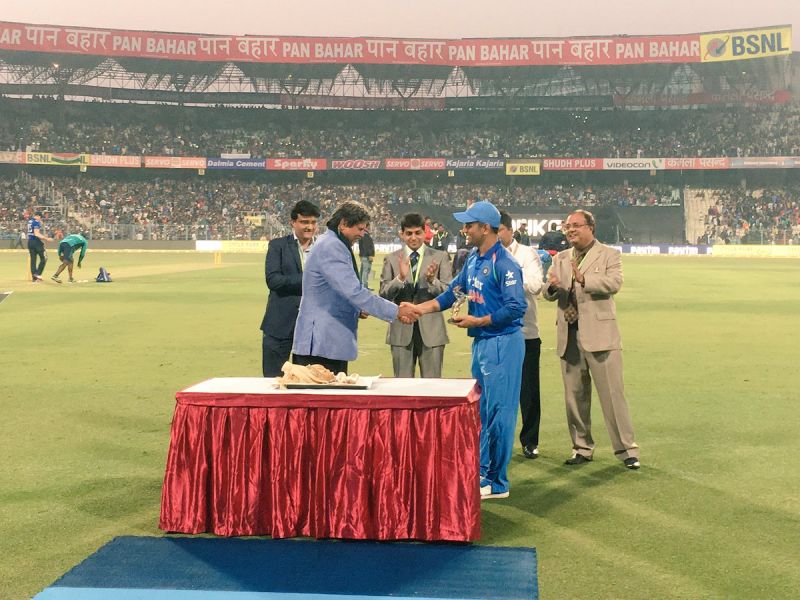 ‘For a glorious decades of captaincy’ screamed a banner as the packed 67000-capacity crowd screamed Dhoni, Dhoni with his footage being displayed on the giant screen during the felicitation ceremony.

The Eden Gardens also gave the place of honour to Bengal’s first cricket icon Pankaj Roy, who led India once in his 43 Test appearances and was best known for his 413-run opening stand with Vinoo Mankad against New Zealand at the then Madras (Chennai) in January 1956. It stood as a world record for over 50 years.