In city’s heart, cry for change?

Bangalore Central, the power and business hub of the city, has problems so typical of any urban constituency with infrastructure groaning under the burgeoning migrant population, galloping traffic and the pressures of a growing metropolis including pollution and unclean lakes. These are usually the domain of the local corporator but then the MP too will have to share the burden considering that this is the part of the IT capital which is always in the limelight nationally and globally. Has current BJP MP P.C. Mohan been able to live up to the challenges? Or has he been overwhelmed by the expectations of a populace which will not settle for anything but the best? A triangular contest is on the cards with cine star Prakash Raj  entering the fray and this could add an unknown dimension to voting patterns. Can Congress candidate Rizwan Arshad upset Mohan’s plans for  a third term by tapping into the substantial minority and migrant vote? Abilash Mariswamy visits Bangalore Central to interact with citizens and find out what the MP has achieved and where he has faltered

The Lok Sabha election from  the Bengaluru (Central) constituency has become a lot more interesting this time with the BJP's sitting MP, PC Mohan not only taking on Mr Rizwan Arshad of the Congress and but also actor, Prakash Raj, who is contesting as an independent from this stronghold of the saffron party. 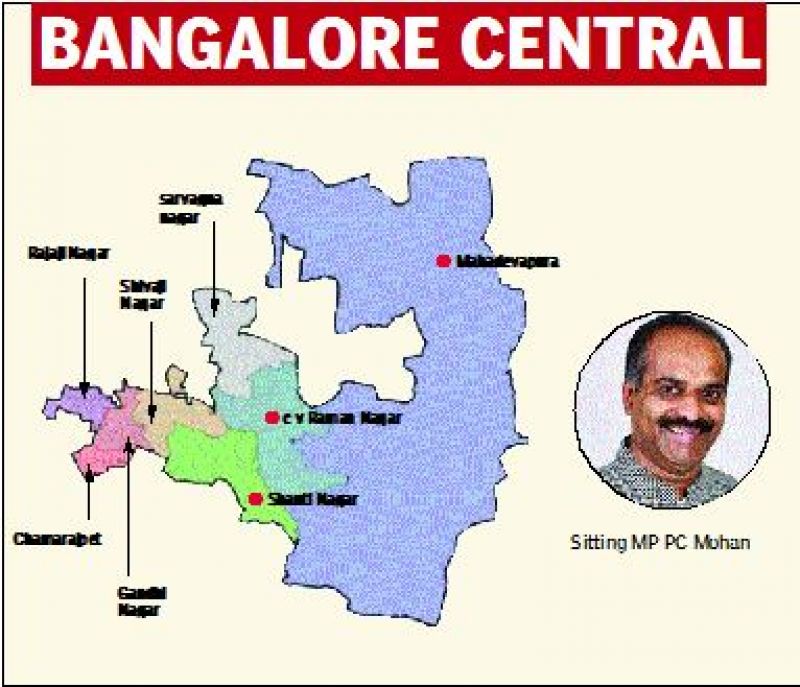 Anti-incumbency doesn’t seem to be dogging Mr P C Mohan, the sitting MP of the BJP in Bengaluru Central as the people here seem largely satisfied with the work he has done. “He built the station using his MPLAD funds and took the initiative to bring the suburban rail to the city,” says Mr Mohan Rao of Hoodi junction, referring to the halt station at Hoodi, which the MP was instrumental in building and the  interest he has taken in bringing the suburban rail to Bengaluru.
Like many here, he seems happy that  the Centre allocated Rs. 17,000 crore for the project, which is helping commuters from Whitefield, Banaswadi and Hosur.  Mr Rao believes the MP is capable of doing more  such work and should be given the opportunity again. But a housewife,  Reema, from the constituency feels Mr Rizwan Arshad, who is young, should be given a chance as he could come up with newer ideas and initiatives to develop it further.

Located in the heart of the city, Bengaluru Central covers eight Assembly constituencies which are home to a mix of middle and low-income voters.

Besides, there is a large Tamil-speaking population in Shanthinagar, Shivajinagar, Gandhinagar, and Sarvagnanagar, and  a good number of techies employed in IT firms in  C V Raman Nagar and Mahadevapura.  Muslim and Christian voters too play a vital role in the constituency.

While there are about 21.4 lakh voters in Bengaluru (Central), Mr Mohan was elected the last poll with 5.5 lakh votes, defeating Mr Arshad, who got 4.19 lakh votes. The JD(S) candidate came a distant third with 20,000 votes.

However, the pattern changed in the 2018 Assembly elections when the Congress and JD(S) received 6.6 lakh votes and the BJP managed only 4.6 lakh.

While there are 22 candidates in the fray in the constituency,  Mr Mohan's rivals are Mr Arshad, and Mr Pakash Raj, who is trying his luck in electoral politics for the first time,  clearly with the intention of taking on Prime Minister Narendra Modi, who he has been a vocal critic of for a while now.

Although Mr Mohan may encounter some anti-incumbency, voters in the constituency seem largely satisfied with his efforts, especially with the infrastructure projects he has been responsible for. While Mr Raj, who is a popular actor in regional cinema and has also done some Bollywood films, appears to be  banking on his fame to make a difference this poll, Mr Arshad is obviously hoping the minority votes will help him improve his performance and defeat the BJP.

Although Mr Mohan has won with a big margin twice from Bengaluru Central with the techies too voting for him, it is expected to be  a tight three-cornered contest this time.

Home to the national headline-making frothing Bellandur Lake, Bengaluru Central's chief issues revolve around pollution, shortage of drinking water and congested roads. Drinking water is a key issue particularly in Mahadevapura where the Bellandur lake is located, as the people here don't dare depend on borewell water for fear of contamination and opt for  water sold by private suppliers instead.

Complains Mr Shiva Kumar, a local resident, "Every time the elections are held, candidates of all parties promise to clean up the Bellandur lake, but forget about it as soon as they are done with the campaigning, and the lake only gets more frothy and smelly."

Congested roads add to the area's troubles as the BMTC buses, two-wheelers, cabs, and autos  that people depend on largely for transport here crowd the narrow roads, leading to frequent traffic snarls all through the day.  With goods carriers and tempo travellers too arriving to offload or pick up goods at peak hours, the roads get only more crowded. But since the Metro Rail's arrival, many from Mahadevapura and Sarvagna nagar have started commuting by train, taking some load off the roads.

A booth with 90 voters in Assam polled 171 votes, officials fired