Protesters supporting jallikattu try to hold on to each other as police try to remove them from the Marina beach in Chennai on Monday. Protesters attacked a police station with stones and set some vehicles on fire on Monday in anger at being forcibly evicted from the beach where they been protesting for the past week in support of the sport. (Photo: AP)

Chennai: Close on the heels of Chief Minister O. Panneerselvam tabling jallikattu legislation in the Assembly, prime organisers of the jallikattu protests reiterated that with the Assembly now passing the law and getting the Presidential assent, jallikattu bulls would run unhindered from now on.

Jallikattu Peravai president Rajasekaran, hip hop musician Tamizha Adhi and Veera Vilayatu Peravai organiser Rajesh  welcomed the Tamil Nadu Assembly passing the jallikattu law and asserted this was the “permanent solution” to the issue. They also asked the students and youngsters to call off their protest.

The sober voices, who maintained that the Bill was unlikely to be challenged in a court of law, termed the jallikattu movement success and gave the entire credit to the students and youth who camped at Marina beach and elsewhere in the state for the past one week. 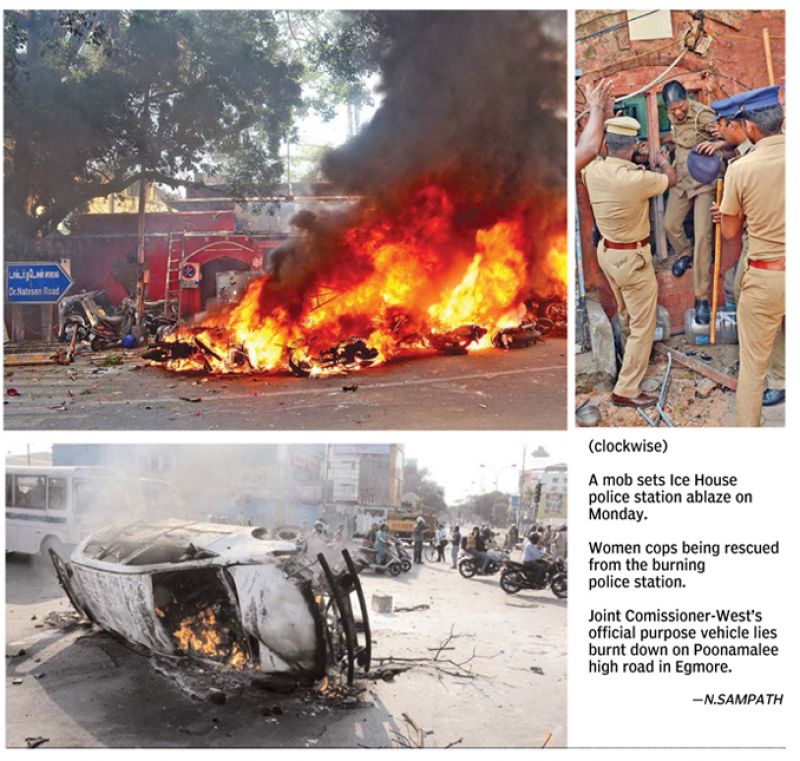 “We thank the ruling party and Opposition parties for unanimously passing the jallikattu Bill in such a short time. This is a historic day for us since jallikattu would be held unhindered from now. We salute the spirit of the students and youngsters who made this happen,” a beaming Rajasekaran told reporters inside the secretariat complex.

Rajasekaran was among the first to appeal to the students to call of their agitation on Sunday as he addressed a press conference along with Adhi and Karthikeyan Sivasena-pathy by asserting that the ordinance, which has now been replaced with a law, was the permanent solution that they have been demanding. He and Adhi had also disapproved anti-national slogans at the protest sites.

Over 70 caveats have been filed on Monday in the Supreme Court to ensure that no order is passed by the court without hearing those who support jallikattu in Tamil Nadu.

Union minister Maneka Gandhi, however, has clarified that her organisation has not filed any petition challenging the ordinance. On Saturday, the Tamil Nadu government issued an ordinance to amend the Prevention of Cruelty to Animals Act so that bulls participating in Jallikattu do not come under the ambit of cruelty.

On Monday the ordinance was passed into a Bill by the Assembly. The caveats were filed to protect the law.   Meanwhile, advocate N. Rajaraman moved the court for a direction to the authorities to take preventive and prohibitive measures to prevent escalation of violence in the State.

He said owing to arson, road roko and violence across Chennai and Tamilnadu people are under severe danger of life and limbs. He made a mention before the CJI J.S. Khehar for urgent listing but the CJI said there is no urgency.

Fishermen families get Rs 10,000 each