Addressing the media in the national capital, Sitharaman, accused Singhvi’s wife and son of holding stocks in Fire Star Diamond I’nal Pvt Ltd- a company run by Nirav Modi. “Fire Star Diamond I’nal Pvt Ltd is one of the companies that Nirav Modi runs. They’ve taken on lease property which belongs to Advait Holding Ltd in Trade Point Building in Lower Parel. From 2002 Anita Singhvi is one of the shareholders. You know who’s wife she is,” said the defence minister.

Also Read: Cong didn't do what was needed, we're doing it: Sitharaman on PNB fraud

Reacting sharply to the accusations, Singhvi said, "NDA cheap sense of politics has reached ludicrous and ridiculous proportions. Neither My wife, sons nor me have anything whatsoever to do with Gitanjali or Nirav Modi companies."

Singhvi said, "Nirmala Sitharaman and her colleagues are liable to civil and criminal defamation for making ill considered and patently false allegations. I reserve my rights to take all such appropriate legal action against the latter and all parts of the media which carry such false and maliciously defamatory allegations."

The Congress leader added, "Nirav Modi’s company was a tenant of a Kamla Mills property owned by Adwait Holdings in which my wife and sons are a director. Adwait Holdings owns a commercial property at Parel, as it does elsewhere, which was rented by Firestone many years ago. Neither Adwait nor my family has any interest with Modi or Firestone. Last August Firestone gave notice to quit tenancy and vacated Parel Kamla Mills premises in December 2017."

Meanwhile, the agency raided the residences of the PNB officials probing their role in issuing the LoUs to the companies. 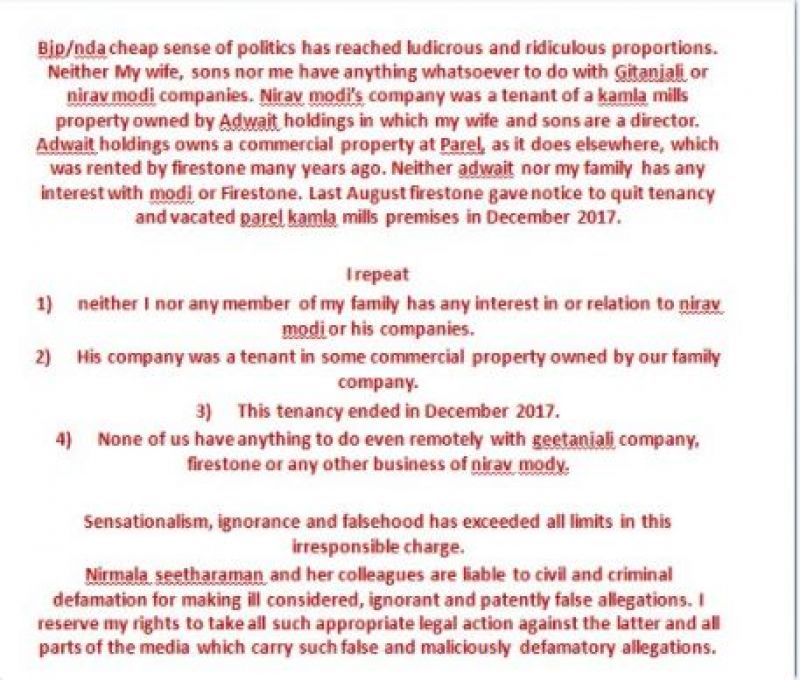 ■Cong didn't do what was needed, we're doing it: Sitharaman on PNB fraud

Kerala: Expat vaccinated with Covaxin seeks for revaccination with Covishield