Cattle on display at one of the markets. Centre has recently issued new rules which looks at cruelties done at these markets. (Photo: DC)

Hyderabad: There are laws and rules to protect animals from cruelty but these are not being followed or implemented in Telangana and Andhra Pradesh. Animals are being slaughtered without observing the rules.

Recently, the Hyderabad High Court pulled up the Guntur Municipal Corporation for running an unauthorised slaughter house even after the Pollution Control Board had ordered its closure.

Animal Rescue Organisation based in Kakinada in Andhra Pradesh  claims that there are hundreds of unauthorised slaughterhouses in both states. 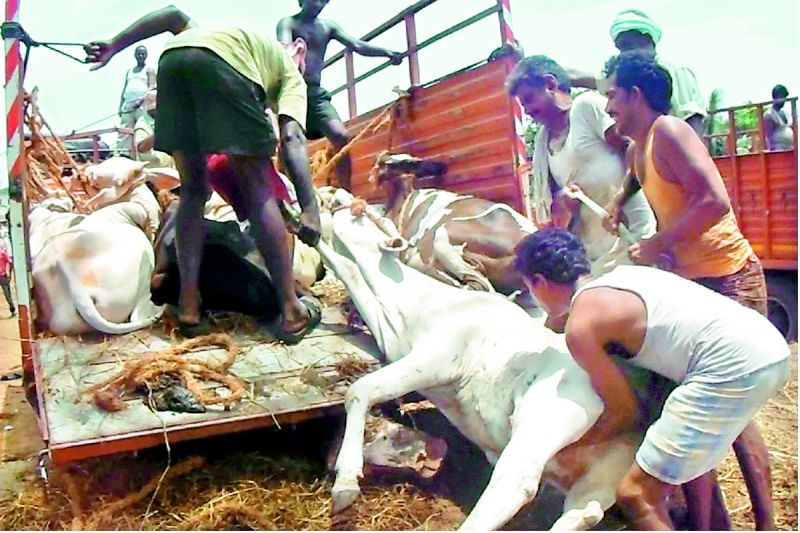 No mercy for cattle

Gopal R. Surabathula, founder secretary of the organisation, says that in many shandies or cattle markets in both states, animals are deprived of basics like water, fodder and shelter. Most of them are held under trees and trading takes place without any paper work, though the law mandates documentation of sale of cattle and livestock.

He has filed cases in the Hyderabad High Court against the Pithapuram animal shandy and an unauthorised slaughterhouse run by the Guntur Municipal Corporation.

The 12th Schedule of the Constitution of India mandates municipalities to regulate slaughterhouses and tanneries, but most municipalities in both states have failed to fulfil this constitutional obligation.

Surabathula said that though the Transport of Animal Rules 1978 stipulate that the average space provided per head of cattle in a railway wagon or vehicle shall not be less than two square metres, in most cases cattle are transported in violation of this provision.

A. Santosh Kumar, advocate of the High Court, said that as per Rule 98 of the Animal Transport Rules 2001, animals that are to be transported must be healthy and in good condition and such animals must be examined by a veterinary doctor to certify that they are free from infectious diseases and are fit to undertake the journey.

He said that the Centre has recently issued Rules to prevent cruelty to animals and as per those Rules various cruelties that commonly take place at markets will no longer be allowed, including hot branding and cold branding, mutilating animals’ ears, and force-feeding animals fluid to make them appear fatter to fetch a better price.