MJ Akbar claims that the journalist entered into consensual relationship with him in around 1994. The relationship spanned several months. (Photo: Twitter | @pgogoi | PTI)

Mumbai: Former Union minister MJ Akbar, accused by several journalists of sexual harassment during the #MeToo movement, on Friday said the allegations made by US-based journalist Pallavi Gogoi in The Washington Post -- accusing him of rape -- were “false”.

In a statement to news agency ANI, Akbar said his lawyer received a series of cryptic and non-specific questions from The Washington Post on October 29, regarding incidents alleged to have taken place approximately 23 years ago.

“These allegations were false and were consequently denied,” MJ Akbar said.

Referring to an article published in The Washington Post written by Pallavi Gogoi where she has accused Akbar of raping her, the former junior minister of foreign affairs said, “I have had occasion to read this article and it has become necessary, at this point in time, to bring certain facts to light.”

Akbar claimed the journalist entered into a consensual relationship with him around 1994. The relationship spanned several months.

“This relationship gave rise to talk and would later cause strife in my home life as well. This consensual relationship ended, perhaps not on best note,” Akbar claimed.

Akbar added, “People who worked with me and knew both of us (Pallavi and him) have indicated that they would be happy to bear testimony to what is stated above and at no stage, did the behavior of Pallavi Gogoi, give any one of them impression that she was working under duress.” 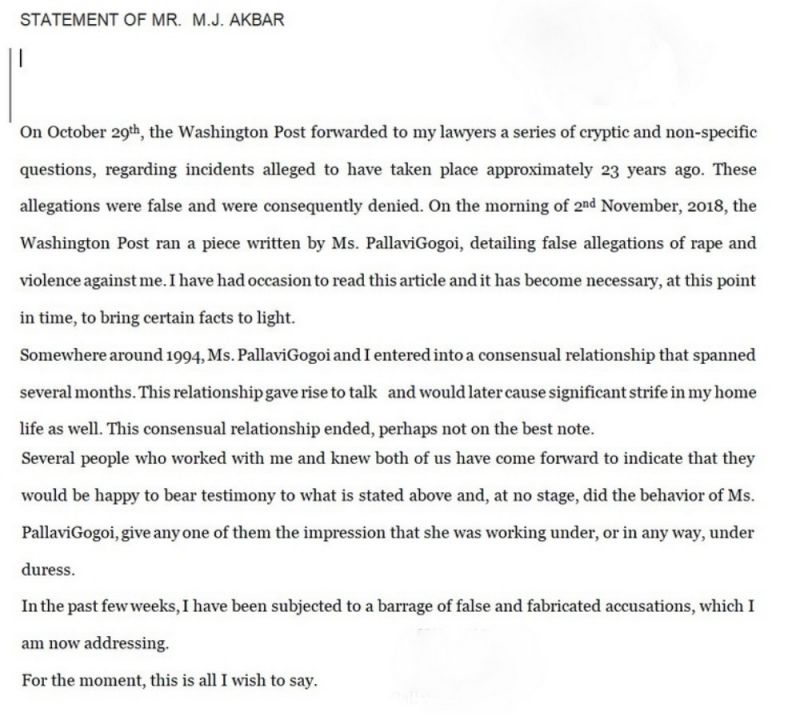 Reacting for the first time over the sexual harassment allegations made against Akbar, his wife Mallika told ANI that she maintained silence all this while #MeToo campaign has been unleashed against her husband. “However, The Washington Post article by Pallavi Gogoi alleging that she was raped by him forces me to step in with what I know to be true,” she said.

Mallika claimed that Gogoi had caused “unhappiness and discord” in their house over 20 years ago due to her relationship with MJ Akbar.

“I learned of her (Gogoi) and my husband’s involvement through her calls and her public display of affection in my presence. In her flaunting the relationship, she caused anguish and hurt my entire family,” she said.

“I don't know Pallavi's reasons for telling this lie, but a lie it is,” Mallika added.

Mallika said that at The Asian Age party at their home, crowded with young journalists, she watched with mortification and pain as her husband and Gogoi danced close. “I had confronted my husband at the time and he decided to prioritise his family,” she added.

She further claimed that another woman journalist who accused Akbar, Tushita Patel, and Pallavi Gogoi were often at her home but none of the two carried “the haunted look of victims of sexual assault”.

“Tushita Patel and Pallavi Gogoi were often at our home, happily drinking and dining with us. Neither carried the haunted look of victims of sexual assault,” Mallika said. 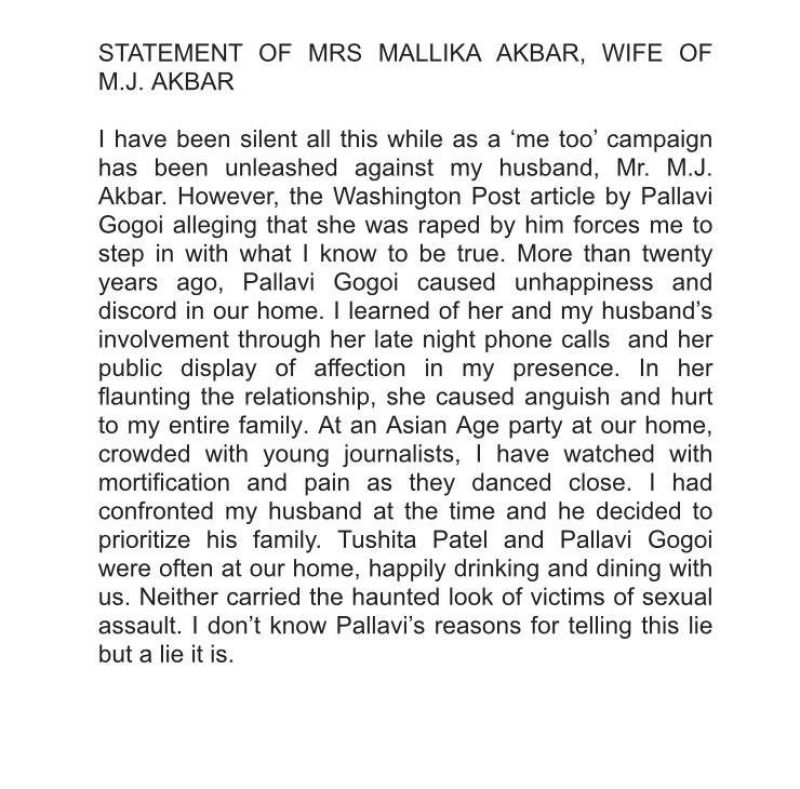 Karuna Nundy, an advocate with the Supreme Court, said most sexual assault survivors don't 'carry the haunted look of victims'.

Much as I respect Mallika Akbar, most sexual assault survivors don't "carry the haunted look of victims". Much like wives of renegades, they try to balance the competing demands of patriarchy and carry on with their lives the best they can. https://t.co/UJu9iPSQxz

Researcher and teacher Maya Mirchandani said that MJ Akbar has clearly woken up to the fact that he can’t scare off the women accusing him with a defamation case.

Consensual between an editor and a 23 yr old employee?! Right,Sure. He’s Clearly woken up to the fact that he can’t scare off the women accusing him with a defamation case. Rape carries a 7 year prison sentence if found guilty. that must have hit home! #MJAkbar #MeToo #MeTooIndia https://t.co/9D6YF0zGVA

Over a dozen women in the last few weeks have spoken about their harassment in the hands of the former editor. Instances mentioned range from the 1990s, when he was editor of The Telegraph and subsequently The Asian Age, till well into 2000.

Akbar has sued journalist Priya Ramani for criminal defamation after she named him as the subject of an article she had written in Vogue last year.