Tamil Yeoman is treasure of Nilgiris

With the Tamil Nadu government recently declaring the Tamil Yeoman, a butterfly species endemic to the Western Ghats as Tamil Nadu’s state butterfly, the focus on butterfly conservation is beginning to catch up.

Ooty: “Beautiful and graceful, varied and enchanting, small but approachable, butterflies lead you to the sunny side of life. Everyone deserves a little sunshine,” this quote of  Jeffrey Glassberg portrays how butterflies are important to inspire humans.

With the Tamil Nadu government recently declaring the Tamil Yeoman, a butterfly species endemic to the Western Ghats as Tamil Nadu’s state butterfly, the focus on butterfly conservation is beginning to catch up.

Saying that butterflies, with their vibrant colours and elegance, motivate artists as well as shutterbugs, Manoj Sethuraman, a naturalist and member of the Wynter Blythe’s Association (WBA) based in Coonoor town in the Nilgiris, said that WBA had only a very small role in the selection process of the state butterfly, like participating in the survey, short-listing contestants, sharing information and pictures of butterflies and host plants, while heads and experts  in the TN forest department and ‘Act 4 Butterflies’ organization played a major role. 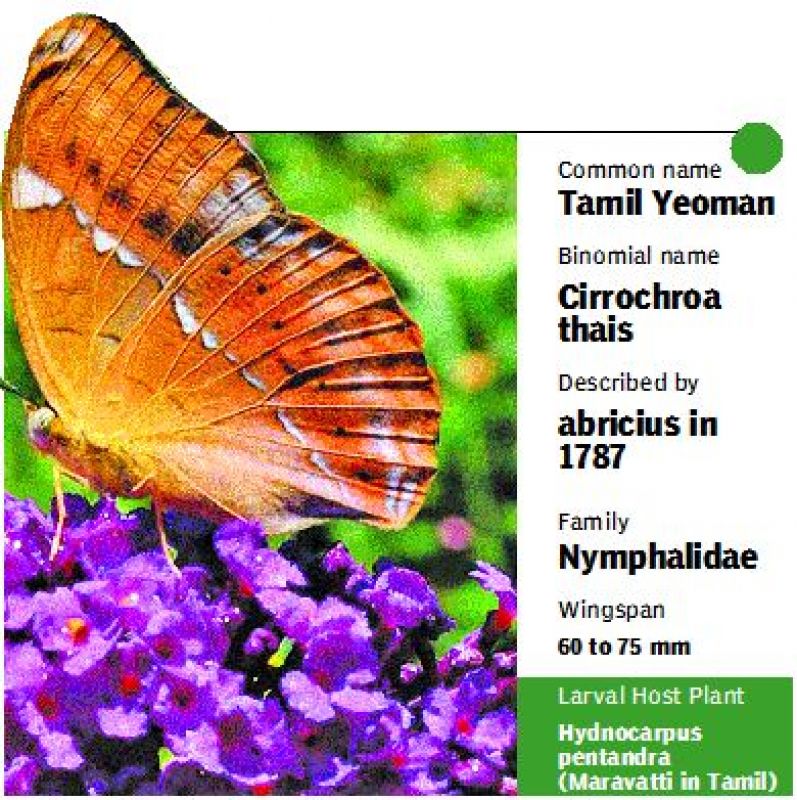 The Tamil Yeoman (cirrochroa thais) is an attractive tiny winged beauty with brilliant and glittering orange wings with a dark brown outer ring. “Bearing the name Tamil, its host plant Maravatti which is also  a Western Ghats endemic plant species that is said to have given the name ‘Maravan’ (warrior in Tamil)  to this elegant butterfly, would have given this butterfly an edge for the top honours, Manoj reasoned.

Wynter Blythe’s Association (WBA) based in Coonoor town in the Nilgiris, was initiated by a group of friends in 2015, said Manoj Sethuraman, a senior member of the WBA.

“The object of the group was to document and study butterflies and its importance in the environment. In 2016, the WBA became a registered trust. The group members are small in number, but passionate and enthusiastic about their objectives. We at WBA have been walking almost every Sunday, documenting butterflies. We have been studying and following their migration pattern over the entire Nilgiris and neighbouring districts for the last five years. The WBA conducted an official butterfly survey for the first time in the Nilgiris in 2018, in partnership with the Tamil Nadu Forest Department, covering the entire district, with volunteers from neighbouring states too. The WBA has to its credit, three published research papers on butterflies of the Nilgiris. We at WBA feel that it is our responsibility to include the people of the Nilgiris from different walks of life to create awareness of the importance of butterflies in our environment,” he noted.

Australia's platypus may be pushed to extinction by prolonged droughts