Sridevi was taken to a Mumbai crematorium in a flower-bedecked truck with a huge blowout of her at the front.

Mumbai: At the end, she went out as she had lived and shined. In full pomp and splendour.

Bollywood superstar -- the popular film industry’s first woman to hold that title – Sridevi Kapoor, 54, was cremated with state honours on Wednesday evening, four days after her unfortunate death by accidental drowning in Dubai.

At the very last moment, her husband Boney Kapoor lit the pyre first and was later joined by their daughters Janhvi and Khushi. Step-son Arjun Kapoor looked desolate.

Adnan Siddiqui, who played Sridevi's on-screen husband in the Ravi Udyawar-directed movie, had earlier told a leading daily, "When everything was settled, Boney saab called me upstairs. He was there along with a family friend, his wife and a daughter. Boney saab was crying like a baby; he was inconsolable. I was with him until 5 am. He was under a lot of stress, so I advised him to rest, and then left."

The outpouring of grief by her fans was palpable both at the suburban sports club where she lay for fans and stars to pay respect and at the Vile Parle crematorium where her final rites were performed.

She lay in state at the Celebration Sports Club in Lokhandwala -- a short distance from her home -- till 2 pm on Wednesday afternoon to allow fans and stars a last glimpse after her untimely death in Dubai on Saturday night.

Before her final journey to the crematorium from the sports club, Sridevi was draped in the tricolour and her entire family stood next to her.

Since early morning, thousands stood patiently outside the sports club, in nearly a mile-long queue at all moments, for a last glimpse of the Padma Shri actress.

Holding flowers and posters, chanting mantras, fans walked solemnly through the barricades towards the large hall in the club where Sridevi lay in state. There were people -- nearly a lakh -- from all cross-sections of society who moved slowly in a single file towards the club for a last glimpse.

Guided by some excellent police bandobast, people entered the hall where she was kept under a white canopy of tuberoses. It was the actor’s wish to go out in dazzling white.

The actress, who has spent 50 years of her 54 performing, lay under the canopy in the flower bed of a transparent casket. The queen of chiffon was draped in a magenta and gold silk sari. 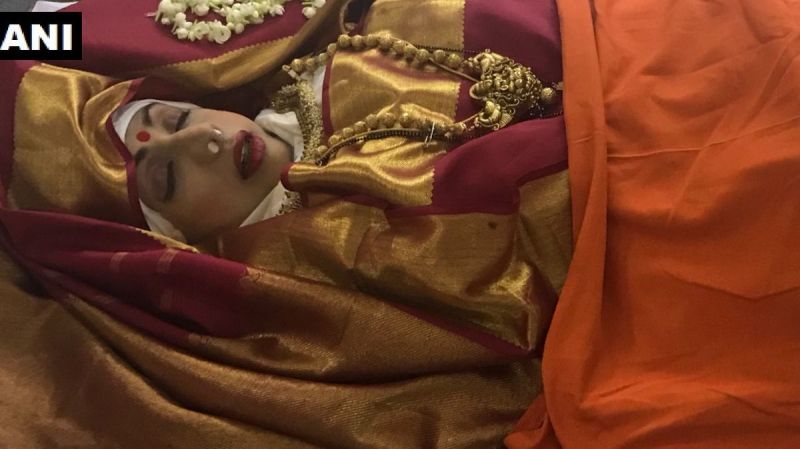 Sridevi lies in state before funeral.

Sridevi's final journey was in a decorated truck carrying the iconic actor's mortal remains to the Vile Parle crematorium. At the front of the truck, there was a big cutout of her smiling face, ringed in by white and gold flowers. 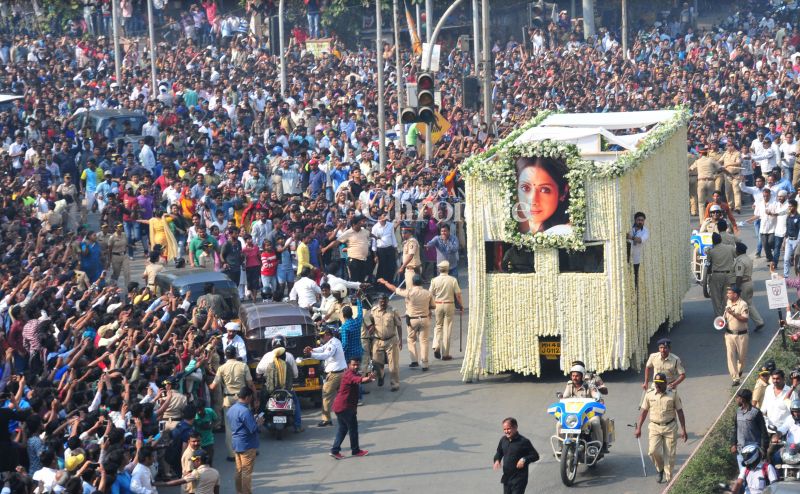 Before she left, the Mumbai Police band accorded state honours to the late actress and wrapped her body in the tricolour.

She was also given a gun salute at the crematorium before final rites.

Many fans stayed behind at the sports club long after her cortege had left for the crematorium. 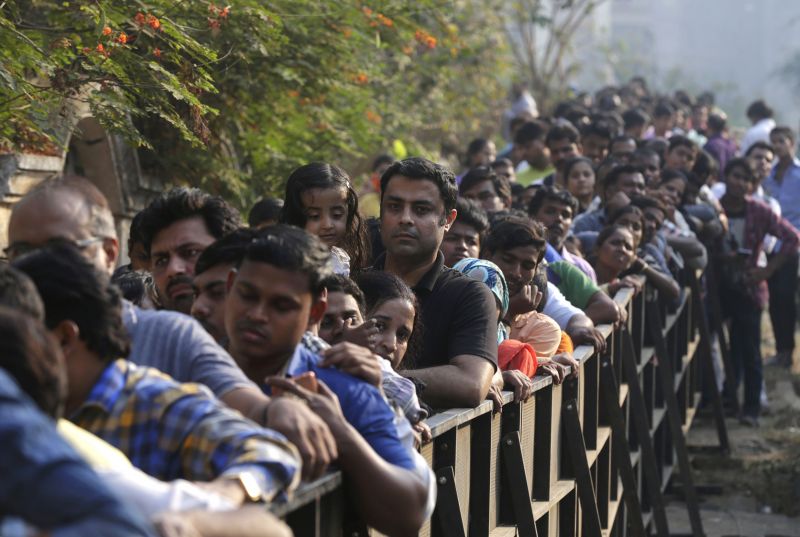 Fans wait patiently for a final glimpse of Sridevi.

Sridevi's stepson Arjun Kapoor oversaw the arrangements outside the club and here he is seen standing next to the flower-decked truck that carried Sridevi to the crematorium. 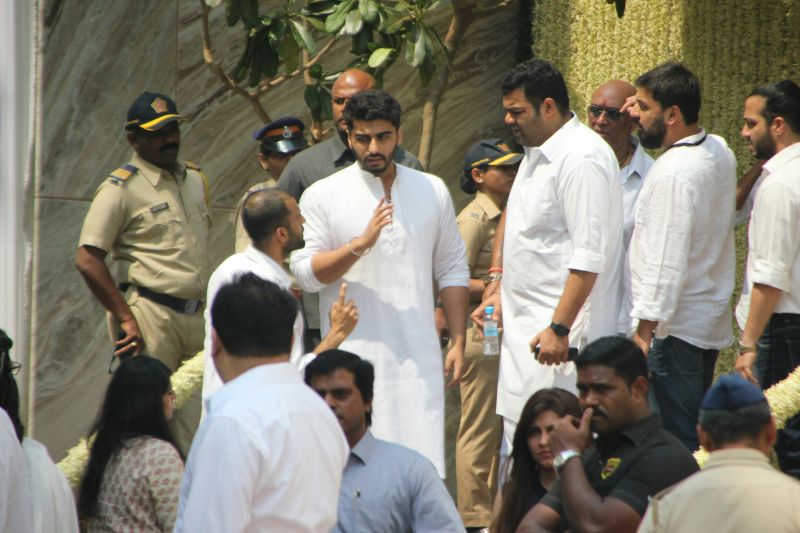 The actor's cortege, flanked on both sides by a sea of people, reached the Vile Parle crematorium early evening, around 4 pm. Thousands waited outside the crematorium from afternoon for a glimpse.

After the last rites, the family posted a statement and Boney Kapoor paid a lovely tribute to her from her Twitter handle.

Earlier in the day, several Bollywood artists visited the sports complex to pay their last respects. Among the firsts to arrive were Aishwarya Rai Bachchan with Jaya Bachchan and Shweta Nanda. 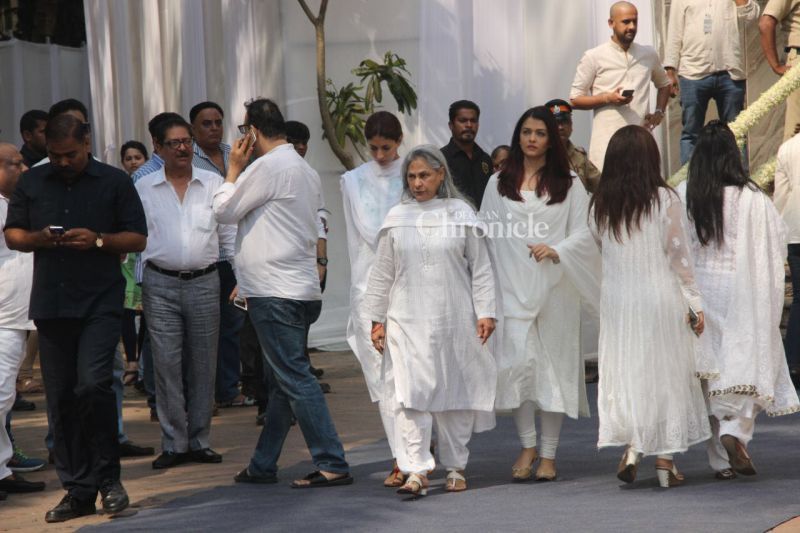 Deepika Padukone too came to pay her last respects to the late actress. Deepika had visited Anil Kapoor’s home with beau Ranveer Singh two days ago. 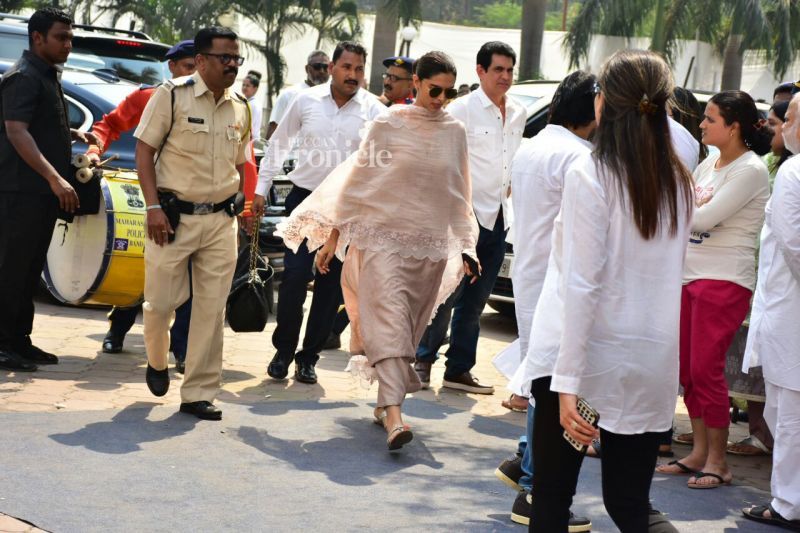 Ajay Devgn was celebrating his wedding anniversary with his family in Singapore when Sridevi passed away. He returned to the city on Tuesday. Ajay and Kajol both arrived together at the sports club to pay respect to Sridevi. Seen with them were Kajol's mother Tanuja and sister Tanishaa. 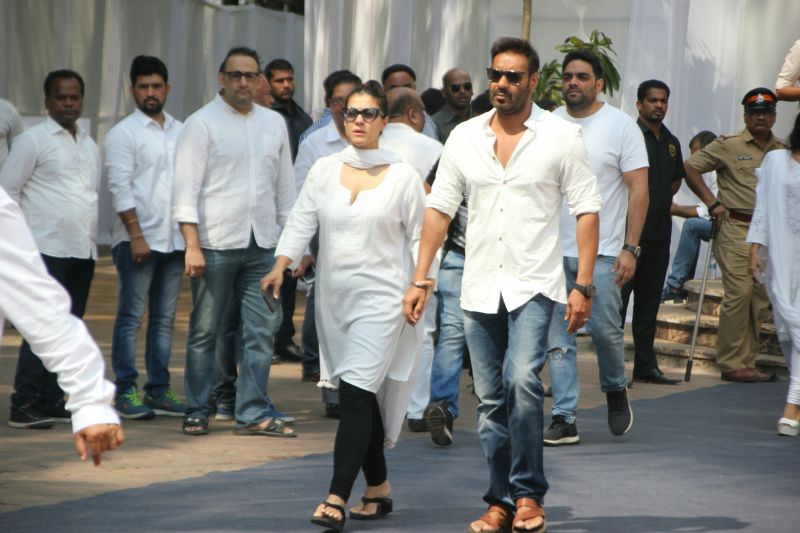 Jacqueline Fernandez was also seen at the sport club. She is close friends with Sonam Kapoor, who is late Sridevi's niece.

Sushmita Sen was also there. 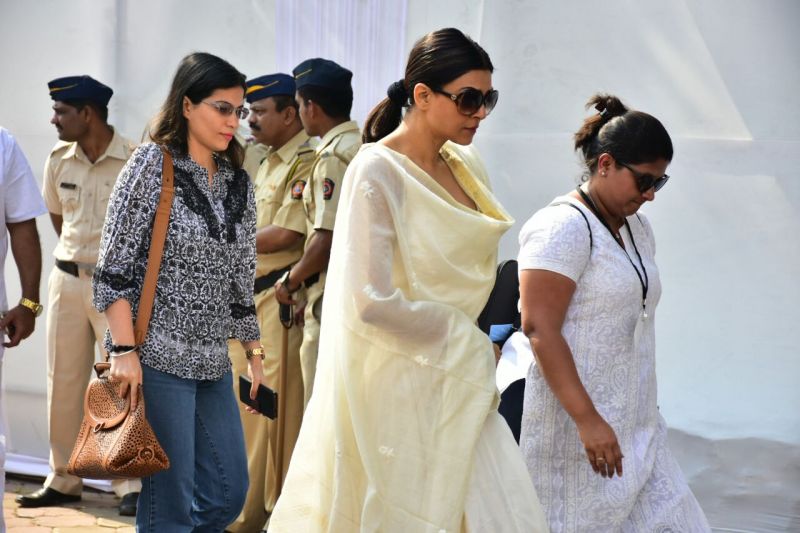 Veteran actress Jaya Prada also came to see her friend and peer Sridevi. Like Sridevi, Jaya Prada too was popular in both Bollywood and South industries, courtesy films in multiple languages.

Shahid Kapoor came with wife Mira Rajput Kapoor to pay his respects to the actress. 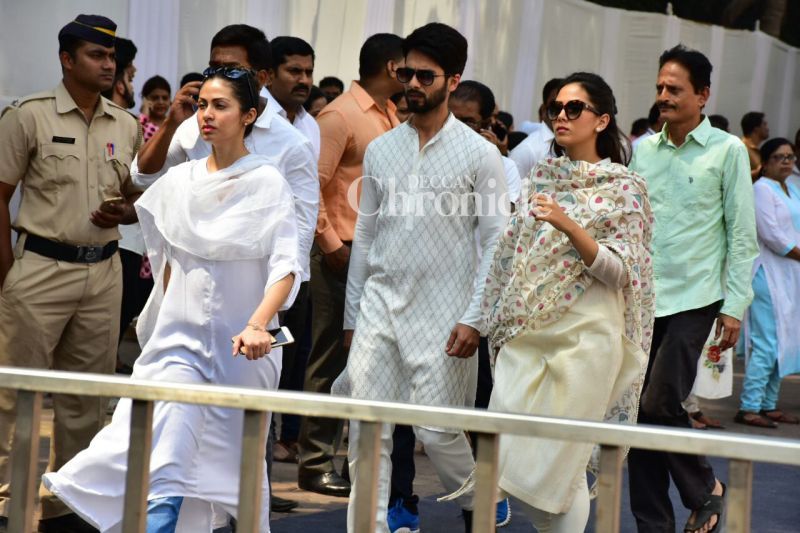 Madhuri Dixit Nene was also there with her husband Dr Sriram Nene at the venue.

Earlier, industry insiders and friends visited the family in the home of actor Anil Kapoor, Boney Kapoor's younger brother. With their father away in Dubai the last three days, Khushi and Jahnvi were at their uncle's Juhu home.

B-town celebs that have called on the family in their hour of grief in the last two days include Shah Rukh Khan, and his wife Gauri, Rajinikanth, Kamal Haasan, Ranveer Singh, Deepika Padukone, Tabu, Rekha and Farah Khan.

■Rani on Sridevi's demise: Most painful thing I dealt with after my dad's passing
■Sridevi's mortal remains brought home in Mumbai amid chaotic scenes
■Sridevi dropped from Madhya Pradesh Assembly’s condolence list
■Sridevi’s death triggers botox, diet scare
■One Off: What killed Sridevi before she died
■When Janhvi Kapoor took Sridevi on a ride