Missing lovebirds Ranbir and Alia? Their moms make up for couple’s absence by bonding

Both Alia Bhatt and Ranbir Kapoor are very close to their respective mothers, Soni Razdan and Neetu Kapoor.

Mumbai: Lovebirds Alia Bhatt and Ranbir Kapoor might squeeze in some ‘us time’ in Bulgaria amid shoot of their upcoming fantasy-adventure film ‘Brahmastra’, but at home, their mothers Soni Razdan and Neetu Kapoor are making up for their absence with their camaraderie.

The two star moms and actresses are bonding big time on Instagram, and their comments on each other’s posts is proof of it.

It all started with Neetu sharing a collage of her childhood picture and her granddaughter Samara’s, and Soni loved ‘the intense little face’ and the former returned the love back with an emoji.

Few days later, Soni posted an image in her car ,and Neetu was impressed with her hair streak and made it known in the comments section.

There is only one way to look 🖕#lookinup #goldengirl #lighter #skyabove

The ‘Raazi’ actress then posed like a ‘lady of leisure’ in another picture, and while her daughter thought she looked stunning, even Neetu echoed her views with the heart emoji again. 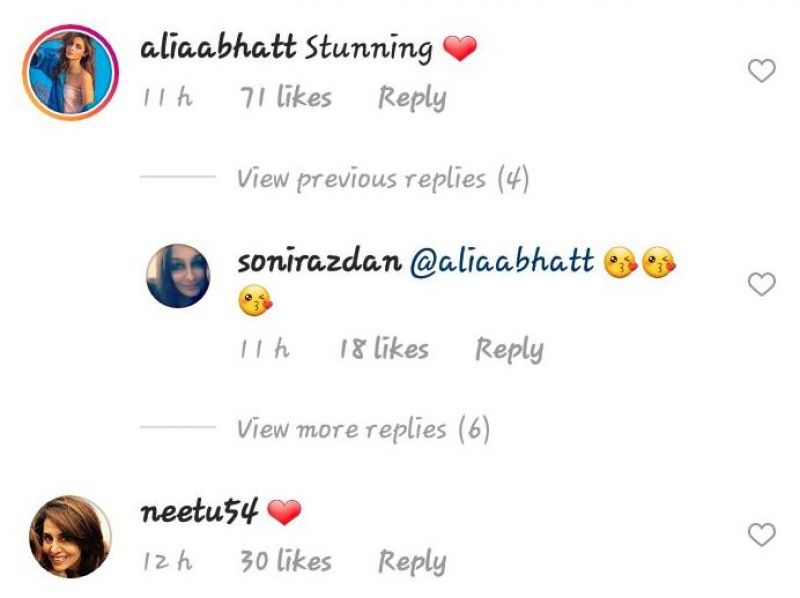 The Alia-Neetu bonding on the photo-sharing app, something which made their fondness for each other evident, also continues.

Neetu was keen Alia gives Puneet B Saini, her close friend and make-up artist working on ‘Brahmastra’, a big hug on her birthday, and the actress cutely obeyed her request by saying, “Done” and a lovely emoji.

Meanwhile, Rishi Kapoor’s sudden praise about the Bhatt family and meeting Alia later, and Mahesh Bhatt interacting and raving about Ranbir had made headlines previously.

Also read: ‘I love him very much’: Alia’s papa Mahesh Bhatt reacts to being ‘Raazi’ about Ranbir

How good would it be to see their fathers bonding with each other on Twitter some day as well!

■Brahmastra: Nagarjuna joins team with Amala in Bulgaria; Ranbir photobombs Alia
■After Mahesh Bhatt 'lot of advice' Alia skips Neetu’s birthday to shoot Brahmastra
■After bonding with Ranbir’s mom Neetu, Alia now has a message for Rishi Kapoor
■Amid strongest hints of affair with Ranbir, Alia bonds with his mom Neetu on Insta