New Delhi: Though the recent pictures of Shah Rukh Khan and his family are giving major vacation goals, seems like a few did not go well with some people on social media.

A picture of the Badshah of Bollywood's daughter Suhana is doing the rounds, where she can be seen donning a brown bikini and sunglasses, with her hair open. The picture also has AbRam soaking up the sun.

The actor is currently enjoying a family vacation across Europe.

However, the absolutely stunning picture of the 18-year-old has attracted several haters and trolls on Instagram.

One of the comments read, "Tum ye mat bhulo ki tum muslim ho (Dont forget you are a Muslim)"

"Shame of u suhana ...joh karna hai karo.per indian culture ke ishaab seh post karo apna photo ...yeh sab private rako.itna respect karta hun apke papa ko.. but I didn't expected from you... (Shame on you Suhana...do whatever you want, but keep the Indian culture in mind. Keep these pictures private. I have so much respect for your father, but I did not expect this from you)" read a comment.

Check out some of the other comments: 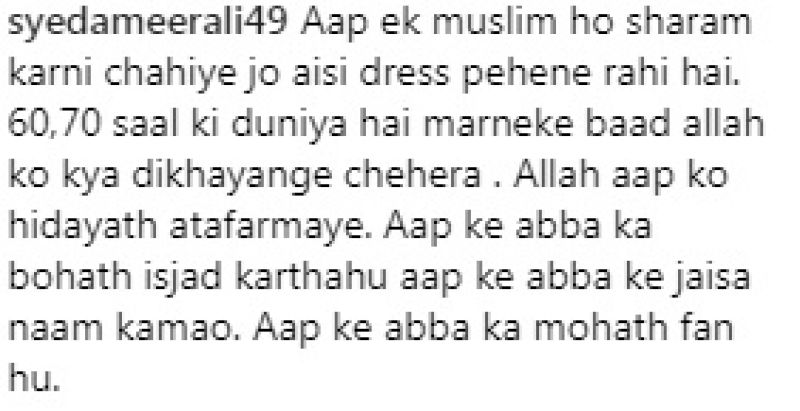 This is not the first time.

Suhana has been the target of trolls in the past, with some of her pictures being subjected to 'moral policing'.

In March, mother Gauri Khan shared a picture of Suhana in a sheer short dress while posing with her maternal grandmother.

Reacting to the picture, some chose to leave shameful comments with one user complaining about her make-up, another wondering if she had undergone 'plastic surgery'.

■Best a woman can get, Gauri on SRK, Aryan, AbRam; sunkissed Suhana is sight to behold
■Watch: Suhana poses for camera thinking it’s for photo, her expressions are killer
■Not just Gauri, Suhana’s pics with her close ones at college prom are super glamorous
■Watch: AbRam recreates dad Shah Rukh's iconic DDLJ scene and it’s too adorable
■Bikini clad Suhana Khan and gang are soaking in the beach vibe; look vibrant!