Indian villagers look at one of the houses damaged in firing by Pakistani troops at Village Nanga, in Ramgarh sector of Jammu and Kashmir. (Photo: AP)&#13;
New Delhi:  A day after Prime Minister Narendra Modi mounted a stinging attack on Pakistan, there has been a decline in shelling and firing from the Pakistani side along the Line of Control.
On Thursday, Modi said the “enemy has realised that times have changed and their old habits will not be tolerated”, while defence minister Arun Jaitley described Pakistan as an “aggressor” and warned that India would make the “costs” of Pakistani adventurism and aggression “unaffordable” for that country. Mr Jaitley said this message had already perhaps reached Pakistan.
He said the Indian deterrence would be “credible” and Pakistan must realise this.
Read: LOC firing: No talk unless firing ceases
India and Pakistan exchanged heavy mortar fire and gunfire along the international border, with Pakistani troops targeting over 130 villages and 60 BOPs overnight in Jammu, Samba and Kathua districts, leaving 12 people, including three BSF jawans, injured. The firing and shelling continued intermittently till 11 am in the Pargwal, Kanachak, Arnia and Ramgarh sub-sectors.
The Pakistan Rangers shelled almost the entire 192-km border in the night. Nearly 30,000 people were displaced after one of the worst violations of the 2003 ceasefire by Pakistan, that has left eight people dead and 80 others, including nine securitymen, injured since October 1. People from 113 border hamlets have migrated, leaving these hamlets deserted.
“The enemy has realised that times have changed and their old habits will not be tolerated. People know my intentions, and I need not express those in words. Where jawans have to speak, they speak with their finger on the trigger and they will continue to speak that way,” the PM said, responding to Opposition criticism against him.
Also Read: Rahul Gandhi hits at BJP over ceasefire violations
“Today, when bullets are being fired on the border, it is the enemy that is screaming. Our jawans have responded to the aggression with courage,” Mr Modi declared at an election rally in Baramati, Maharashtra. Sources said the Army was ready to assist the BSF in any eventuality.
The PM was later given a detailed presentation in New Delhi on the action taken by the BSF and was told that it had virtually destroyed 45 border outposts of the Pakistan Rangers, killing five of their officers. The PM, sources added, was also told that in wake of the strong retaliation by Indian security forces, the Pakistan Rangers had left their BOPs and were hiding in villages close to the international border. 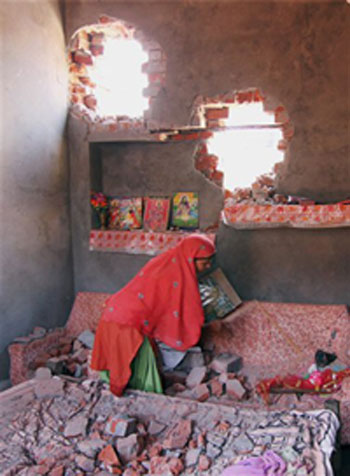 “Such an issue should not be part of a political debate, elections will come and go, governments will come and go, but please don’t demoralise those fighting on the border by debating these things for political gain,” the PM was quoted by news agencies as saying at Baramati.
Defence minister Arun Jaitley said it was an attempt by Pakistan to “precipitate tension (at the international border) where none existed”. He also praised the Army and BSF for responding effectively to the Pakistani firing and said the country had the “paramount duty to defend its people and territory”.
Mr Jaitley also criticised the Opposition Congress and NCP for their comments on the border situation, saying these were ill-informed.
“Pakistan, in these attacks has clearly been the aggressor. But it must realise that our deterrence will be credible. If Pakistan persists with this adventurism, our forces will make the cost of this adventurism unaffordable... Pakistan should understand that this aggression’s response will be effective and if they continue with this adventurism, its costs will be prohibitive for Pakistan. This message has perhaps reached Pakistan and if they continue with this, it will continue to reach them,” the defence minister said.
“Pakistan has engaged in a series of ceasefire violations most of these violations are occurring at the international border. India is a responsible state. It has never an aggressor. At the same time, it has a paramount duty to defend its people and its territory. Our armed forces, particularly the Army and BSF, have only one option, that is to respond adequately, and defend our territory and our people. Our forces have been doing a commendable job in the face of these unprovoked acts of aggression by Pakistan,” he said.
Asked whether the “line of communication” had been closed between Prime Minister Narendra Modi and his Pakistani counterpart Nawaz Sharif, Mr Jaitley said: “How can you talk (with Pakistan) when firing is on?”, adding: “Pakistan has been provoking us repeatedly. There could be many Pakistani designs behind this, firing is intended to provide a cover for infiltration. From the time the floods came, terrorists have been killed in large numbers there. So there is a connection between firing and infiltration. It is also an effort by Pakistan to precipitate tension where none existed for both domestic and international reasons. If Pakistan wants peace, they should stop the firing. I’m not going to disclose what the strategy of our forces is going to be, but Pakistan has to stop this unprovoked shelling and firing if it wants peace. As long as this (firing) continues, how can there be peace?” 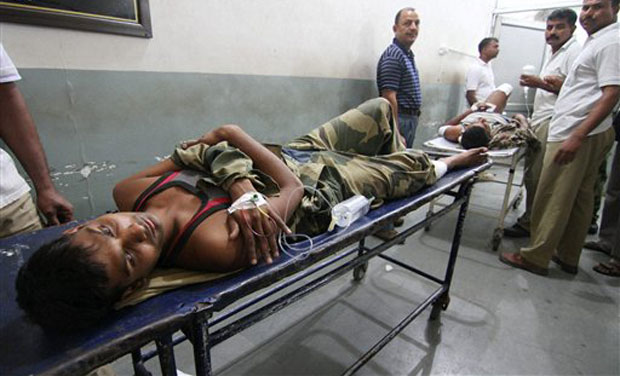 Criticising the Congress and NCP, Mr Jaitley said it was important that leaders across Indian political parties fully understand what our forces were doing at the border. “I’ve seen some very ill-informed responses from some senior leaders. Leaders of Opposition parties should at least know this much of information about the extent to which our forces are going to protect this country. Not only a top-ranking leader of the Congress but also an NCP leader who has been defence minister (an obvious reference to NCP chief Sharad Pawar) at least they should know (the truth),” he said.
Mr Modi also reviewed the situation along the India-Pakistan border with top security and intelligence officials late Wednesday evening. The PM, sources said, directed national security adviser Ajit Doval to closely monitor the issue and coordinate the response of Indian security forces to Pakistan’s ceasefire violations. After the PM’s directive Mr Doval held several meetings on Thursday with senior officials of the home and defence ministries and different security units.
Also Read: We have responded with courage to ceasefire violations: PM Modi
The PM was also informed that not a single militant could infiltrate into India despite the heavy shelling. In fact, before the ceasefire violation, Indian security forces had killed 17 militants north of the Pir Panjal Range while trying to infiltrate into India.
“Pakistan Rangers continued with unprovoked mortar shelling and heavy automatic weapon firing on BSF posts all along the international border since 2045 hours last night”, a BSF spokesman said Thursday. “Almost the whole stretch of international border in Samba, Hiranagar, Ramgarh, Arnia, R.S. Pura, Kanachak and Pargwal (sub-sectors) was affected in the firing,” he said. “About 60 BSF border outposts were affected by the fire from the Pakistan side,” the spokesman said, adding that BSF troops retaliated in a “calibrated manner”.
...
Tags: arun jaitley, ceasefire violation