World Neighbours 29 May 2016 A dangerous task on ...
World, Neighbours

A dangerous task on Mount Everest: Bringing down the dead

International trekkers pass through a glacier at the Mount Everest base camp, Nepal. (Photo: AP)

Kathmandu, Nepal: The mountain is speckled with corpses.

Nearly 300 people have died on Mount Everest in the century or so since climbers have been trying to reach its summit. At least 100 of them are still on the mountain, perhaps 200. Most of the bodies are hidden in deep crevasses or covered by snow and ice, but some are visible to every climber who passes by, landmarks in heavy plastic climbing boots and colorful parkas that fade a little more every year. The most famous corpses get nicknames — “Green Boots,” ‘‘Sleeping Beauty,” ‘‘The German” — becoming warnings of what can go wrong on the 8,850-meter (29,035-foot) peak, even as they become part of the mountain’s gallows humor.

No mountaineer wants to end up a nicknamed body. No grieving family wants their loved one to become a punchline. But in one of the most unforgiving places on Earth, where low oxygen, frigid temperatures and strong winds mean any effort can seem impossible, taking down the dead is no simple thing.

So when four people died on the upper reaches of Everest in recent days, and with a fifth missing and presumed dead, climbing teams and climbers’ families scattered around the world had to face the question of whether the bodies would be brought down.

“For the loved ones back home and family members of those fallen and died on Mount Everest, it is worth it,” said Ben Jones, a guide from Jackson, Wyoming, who made his third successful Everest ascent this year. 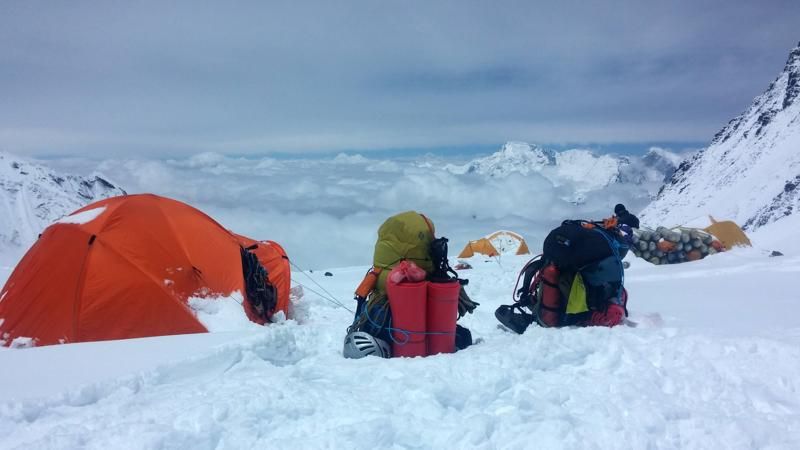 Hundreds of mountaineers have reached the summit of Everest in recent weeks, drawing a line under two years of tragedy on the world's highest peak. (Photo: AFP)

But the equation isn’t simple.

“It’s extremely difficult and extremely dangerous,” said Arnold Coster, expedition leader for Seven Summit Treks, which lost two climbers this year on Everest and spent days getting them off the mountain. “The terrain is steep and the weather is bad. It’s been snowing, and been very windy the past couple days,” he said Thursday, as a team of Sherpas struggled to get the body of one climber, Maria Strydom, low enough to be picked up by helicopter.

It can take 10 Sherpas more than three days to move a body from Everest’s South Col, at 8,000 meters or 26,300 feet, to Camp 2, a rocky expanse at 21,000 feet where helicopters can take over. It’s a painful, exhausting process, with the bodies, which are normally carried in sleeping bags or wrapped in tents, often much heavier because they are covered in ice.

Given the risks involved in spending so much time at high altitudes, many climbing teams decide not to bring down their dead, sometimes lowering them into crevasses or covering them with rocks so they are not gawked at.

Coster said that Strydom’s body was just off a main climbing route, in an area where it was easily visible, and that her family wanted it brought down.

But he said he discussed the situation first with a Sherpa team, evaluating the potential dangers involved, before deciding they could safely get down the mountain with the corpse.

Coster described Strydom as a strong climber who had weakened as she neared the summit. She turned back but later collapsed and died. After being carried down the mountain, her body was flown to Kathmandu on Friday. 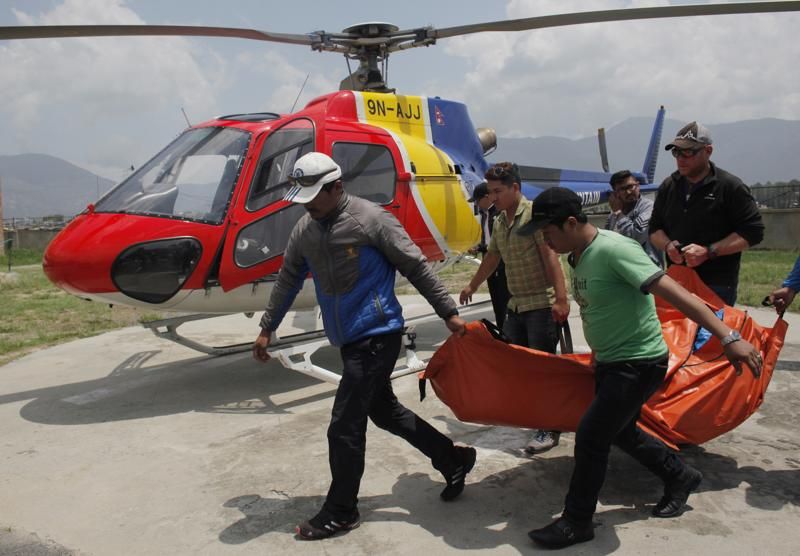 The body of Dutch climber Eric Arnold, who died last week near South Col during a Mount Everest expedition, is carried to Teaching hospital in Kathmandu, Nepal. (Photo: AP)

Dan Richards of Global Rescue, a Boston-based agency, said retrieving a body from Everest is a massive logistical operation that can cost from $10,000 to $40,000, depending on the difficulty and helicopter flights.

“However, we do not take the risk for mortal remains unless it is in a safe location,” he said.

Jiban Ghimire of Shangri-la Nepal Trek, a prominent expedition outfitter agency based in Kathmandu, said recovery operations are generally covered by insurance companies or paid for by the families of the dead climbers. Strydom’s family and friends are trying to raise at least $30,000 to cover what it cost to get her body down from Everest and to Kathmandu, according to Australian media reports.

The climbers who died on Everest this year included Strydom, a Dutch man and two Indian men. Another Indian man is missing, with almost no chance he remains alive.

But across the years, it is Sherpas who die most often on the mountain. In just the past two years, at least 28 of the dead were from the ethnic group that has lived for centuries around Everest, and who have become an integral part of the Himalayan mountaineering world.

The pay on the mountain, in a nation with an average per capita income of just $730, has long made the risks worthwhile.

Sherpa climbing guides can earn up to $7,000, plus bonuses and tips, in the three-month climbing season. Cooks and other support personal earn about half as much.

When a Sherpa dies on Everest, relatives also working there will normally rush to recover the body.

But sometimes, they are never found. 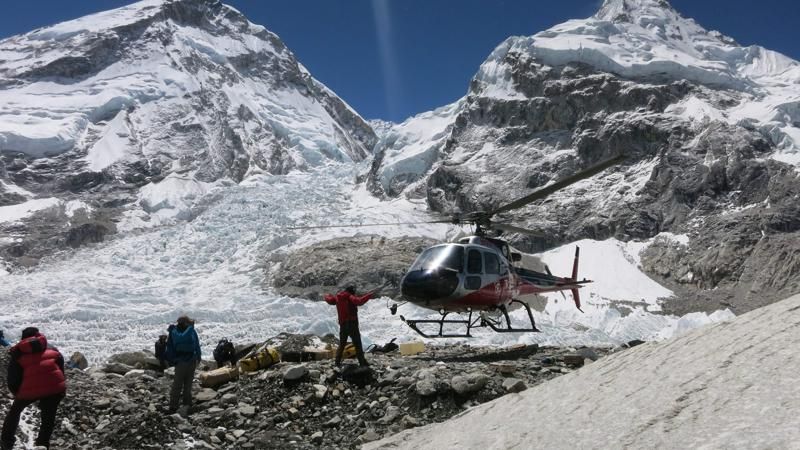 Mountaineers gathering as a helicopter lands at Everest Base Camp. (Photo: AFP)

Chhedar Sherpa, a guide who has scaled Everest seven times, lost his brother and nephew when an Everest avalanche killed 16 Sherpas in 2014. His brother’s body was recovered, but his nephew has never been found.

“In our culture we do not like to leave behind bodies on the mountain. We believe that the bodies should be properly cremated for the peace of their souls and so the family gets closure,” said Sherpa, who gave up high-altitude work after avalanche.

But he added: “We believe that one’s safety should be the priority when trying to bring down a body. “

Sometimes, the mountain itself brings back the dead, as shifting glaciers or melting snow reveal bodies that have been lost for years.

The body of George Mallory, the great English climber who disappeared on Everest in 1924, was not found until 1999. The corpse of a Sherpa guide, who had fallen in a crevasse in 2005, emerged near Base Camp in 2013.

“In the next 10 years or so, these bodies could begin turning up,” he said.