Catholics in colourful ethnic traditional dress waved flags and danced at Yangon's airport in a joyful welcome for the pope, making the first visit to the country by a pontiff. (Photo: AFP)

Catholics in colourful ethnic traditional dress waved flags and danced at Yangon's airport in a joyful welcome for the pope, making the first visit to the country by a pontiff.

The visit comes as Myanmar's military stands accused of waging an ethnic cleansing campaign against the Rohingya Muslims. More than 620,000 have fled a crackdown in northern Rakhine state for neighbouring Bangladesh over the past three months.

The pope's four-day visit intensifies pressure on Myanmar over its treatment of the stateless minority, a group he has called his "brothers and sisters" in repeated entreaties to ease their plight. 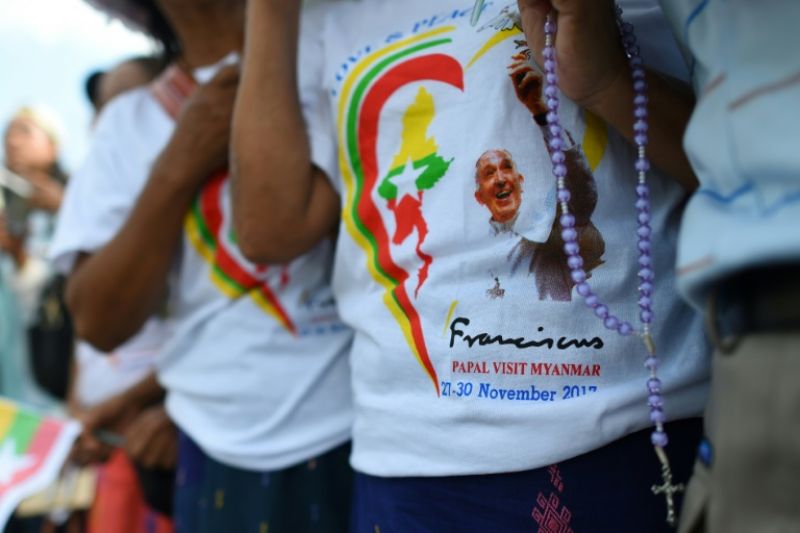 His speeches will be scrutinised by Buddhist hardliners for any mention of the word "Rohingya", an incendiary term in a country where the Muslim group are reviled and labelled "Bengalis" - alleged illegal immigrants from Bangladesh.

Francis will meet civilian leader Aung San Suu Kyi, a Nobel Peace Prize winner whose lustre has faded because of her failure to speak up publicly for the Rohingya.

He will also hold talks with army chief Min Aung Hlaing - a meeting between a religious leader who has championed the rights of refugees and the man accused of overseeing the brutal campaign to drive out the Rohingya.

Speaking to a crowd of 30,000 people in St Peter's Square, shortly before he left Rome, the pontiff said: "I ask you to be with me in prayer so that, for these peoples, my presence is a sign of affinity and hope."

His visit is a historic chance for Myanmar's flock to get close to the head of their church. 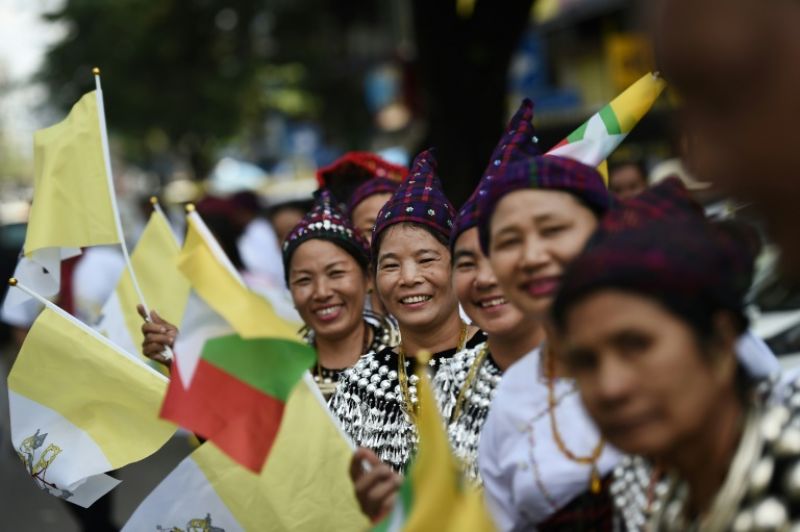 'We are ready to welcome the Pope cheerfully... with pure hearts,' a woman from the northernmost state of Kachin said. (Photo: AFP)

Myanmar's estimated 700,000 Catholics make up just over one percent of the country's 51 million people and are scattered in far-flung corners of the nation, many of them roiled by conflict.

Around 200,000 Catholics are pouring into Yangon, Myanmar's commercial capital, by plane, train and car ahead of a huge open-air mass on Wednesday.

"We are ready to welcome the Pope cheerfully... with pure hearts," a woman from the northernmost state of Kachin said, one of hundreds waiting near the archbishop's residence in Yangon.

But the Rohingya crisis frames the pope's visit.

The army, which ran the country with an iron fist for nearly half a century, insists its Rakhine operation was a proportionate response to Rohingya "terrorists" who raided police posts in late August, killing at least a dozen officers.

But rights groups, the UN and the US have accused the army of using its operation as cover to drive out a minority it has oppressed for decades.

Thousands rally in Myanmar's Yangon despite military build up

US, Taliban to hold first talks since Afghanistan withdrawal