ISIS ties ‘spy’ to crucifix, stab him in the heart before shooting him in head

Identified as Mohammed Al Kadri, the victim was dubbed as a 'spy' by ISIS terrorists. (Photo: YouTube Video Grab)

Raqqa: In yet another newest way of execution, the dreaded terror outfit Islamic State tied an alleged 'spy' to a crucifix before brutally stabbing him in the heart  and shooting in the head.

Identified as Mohammed Al Kadri, the victim was dubbed as a 'spy' by ISIS terrorists. The public execution incident is believed to have taken place in Syrian city of al-Raqqah.

Kadri was stabbed and shot in the middle of the street as Syrian citizens walked past him. ISIS cited the reason behind Kadri's killing as 'crime against fundamentalists'.

Last month, the Islamic State group released a series of photographs of two spies being crucified and shot in the head. 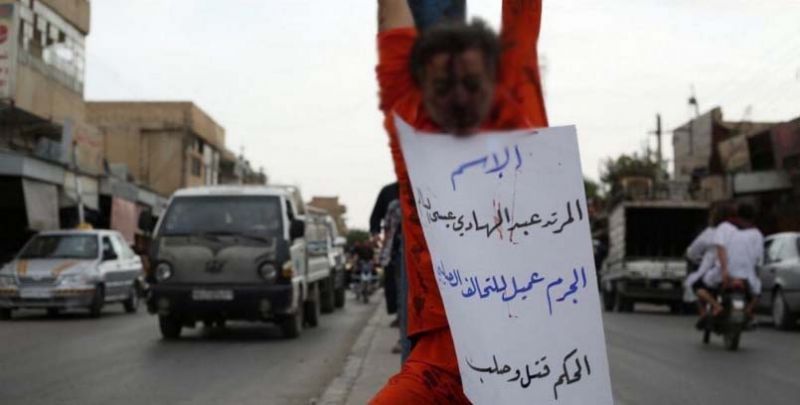 ISIS is known for their propaganda videos that are directed at spreading terror among people. (Photo: Twitter)

The entire incident was captured on camera by ISIS militants and was broadcasted on the terror group's propaganda channel 'Wilayat ar-Raqqah' meaning 'The province of Raqqah.'

After the spies were shot dead, their bodies were hanged with a paper glued to their body. The paper contained a list of accusations and warnings written in Arabic to warn on-lookers about the crime and its consequences.