Tourists haul turtle from sea to take selfies, beat him with stick

Medics fear that his skull bone might have been damaged. (Photo: GreenArea)

Beirut: In a shocking incident, a loggerhead turtle was found in a bruised state on a beach in Lebanon after it was brutally attacked by tourists who visited the place.

According to a report, the turtle was allegedly pulled out by the tourists who wanted to take selfies with it. In the process of clicking photographs with the sea creature, the tourists left it with bruises as they threw the turtle on the sand after pulling it out of water.

As the helpless turtle lay on the sand, more beachgoers surrounded him and started clicking photographs. Witnesses said that the turtle was also beaten with a stick by some tourists.

Unable to save itself from attacking humans, the creature was found in a wounded condition by two passers-by who then carried it to a safe area and contacted GreenArea, an environmental organisation and arranged for a rescue.

The turtle is currently being rehabilitated at an animal charity organisation's headquarters. It is undergoing treatment, including dosage of antibiotics to prevent any kind of infection. 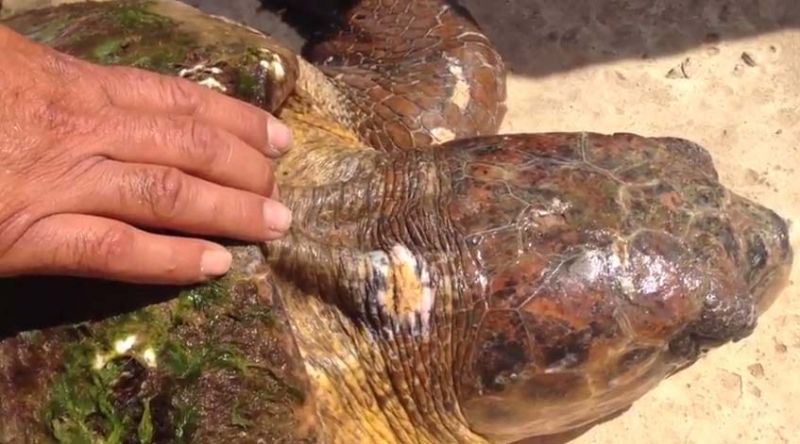 When it was found by its saviours, the turtle had a very evident spot on the top of his head where he was hit by the tourists. Medics fear that his skull bone might have been damaged.

Recently, a baby dolphin was attacked in Argentina when frenzied tourists yanked the dolphin out of the beach water. Because of its inability to live outside water for a prolonged period of time, the dolphin died.

The event forced the Argentinian Wildlife Foundation authorities to issue notice in order to avoid similar mishaps in future.

UAE suspends issuance of visiting visas to Pakistan, 11 other countries