Adviser to Iranian President Hassan Rouhani said the US military deployment to the region was a deliberate provocation. (Photo:AP)

Geneva: The United States and its supporters do not dare attack Iran because of its "spirit of resistance", a senior Revolutionary Guards commander was quoted on Wednesday as saying.

Tensions have spiked between Iran and the United States after Washington sent more military forces to the Middle East, including an aircraft carrier, B-52 bombers and Patriot missiles, in a show of force against what US officials say are Iranian threats to its troops and interests in the region.

"If the criminal America and its Western and regional allies don't dare carry out a face-to-face military attack against our country it is because of the spirit of resistance and sacrifice of the people and youth," Major General Gholamali Rashid said, according to the semi-official Fars news agency.

In a Twitter message addressed to US Secretary of State Mike Pompeo on Wednesday, an adviser to Iranian President Hassan Rouhani said the US military deployment to the region was a deliberate provocation.

"You @SecPompeo do not bring warships to our region and call it deterrence. That's called provocation. It compels Iran to illustrate its own deterrence, which you call provocation. You see the cycle?" the adviser, Hesameddin Ashena, tweeted in English.

Later on Wednesday, Fars quoted another Guards commander as saying the elite force and regular Iranian military units had complete control of Gulf waters north of the Strait of Hormuz. 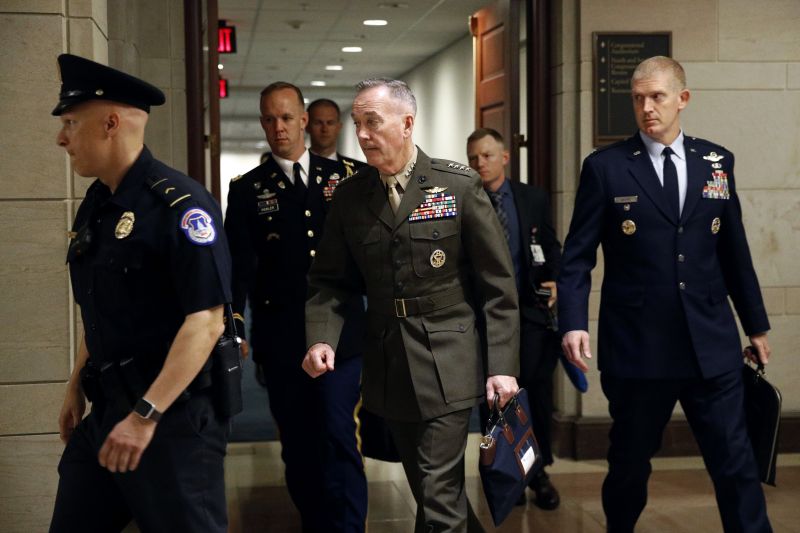 Joint Chiefs Chairman Gen. Joseph Dunford, center, walks to a classified briefing for members of the U.S. Senate on Iran, Tuesday, May 21, 2019, on Capitol Hill in Washington. (AP Photo/Patrick Semansky)

"Everything north of the Strait of Hormuz is under our control," Ali Fadavi was quoted by Fars as saying, referring to the strait at the Gulf's southeastern end through which about a fifth of the oil that is consumed globally flows.

"(Movements of) American battleships in the region are under the complete control of Iran's army and the Revolutionary Guards," Fadavi told Fars, without providing details.

In a statement, the US military said it would continue to fly and sail wherever international law allowed.

"We stand ready with our allies and partners to ensure freedom of navigation and the free flow of commerce throughout the US Central Command area of responsibility," Captain Bill Urban, a spokesman of US Central Command, said.

On Sunday, US President Donald Trump tweeted: "If Iran wants to fight, that will be the official end of Iran. Never threaten the United States again!"