Riyadh: Saudi Araba said drones attacked one of its oil pipelines as other assaults targeted energy infrastructure elsewhere in the kingdom on Tuesday, shortly after Yemen’s rebels claimed a coordinated drone attack on the Sunni power.

The assaults marked the latest incidents challenging Mideast security after the alleged sabotage of oil tankers off the coast of the United Arab Emirates earlier this week amid heightened tensions between the US and Iran.

Yemen’s Houthi rebels, whom Saudi Arabia has been fighting against since March 2015, said they launched a series of drone attacks on the kingdom, across the border from Yemen. The spokesman of the rebels, Mohammed Abdel-Salam, told The Associated Press: “This is a message to Saudi Arabia, stop your aggression.”

“Our goal is to respond to the crimes they are committing everyday against the Yemeni people,” he added.

In a statement carried on the state-run Saudi Press Agency, Energy Minister Khalid al-Falih said that drones attacked a petroleum pumping station supplying a pipeline running from its oil-rich Eastern Province to the Yanbu Port on the Red Sea. A fire broke out and firefighters later brought it under control, though the state-run Saudi Aramco stopped pumping oil through the pipeline.

The kingdom’s state security body also said two petroleum pumping stations in the greater region of Riyadh, the landlocked capital, were targeted at the same time. The statement described it as a ‘limited targeting’ of petroleum stations in areas al-Duadmi and Afif in the Riyadh region, without elaborating. 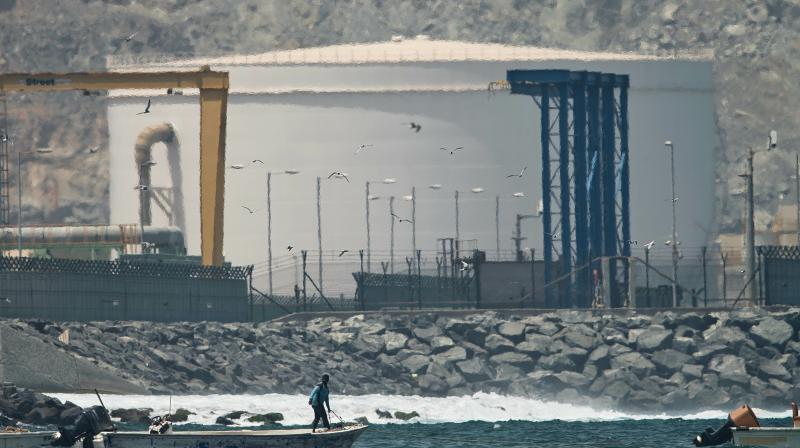 Al-Falih called the attack ‘cowardly,’ saying that recent sabotage acts against the kingdom's vital installations not only target Saudi Arabia, but the safety of the world's energy supply and global economy. He said this reaffirms the need of the international community to confront the activities of groups like the Houthis. He also promised the production and export of Saudi oil would not be interrupted.

Benchmark Brent crude traded at USD 71 a barrel on Tuesday, up USD 1.27 on the day.

The attack on Saudi oil targets comes after four oil tankers anchored in the Mideast were damaged by what Gulf officials described as sabotage, though satellite images obtained by The Associated Press on Tuesday showed no major visible damage to the vessels.

Details of the alleged sabotage to two Saudi, one Norwegian and one Emirati oil tanker on Sunday remained unclear, and Gulf officials have declined to say who they suspected was responsible. But it demonstrated the raised risks for shippers in a region vital to global energy supplies as tensions are increasing between the U.S. and Iran over its unraveling nuclear deal with world powers.

The U.S. has warned sailors of the potential for attacks on commercial sea traffic, and regional allies of the United Arab Emirates condemned the alleged sabotage as the tankers were off the coast of the UAE port city of Fujairah.

A US official in Washington, without offering any evidence, told the AP that an American military team's initial assessment indicated Iran or Iranian allies used explosives to blow holes in the ships. The official, who was not authorized to discuss the investigation, agreed to reveal the findings only if not quoted by name. The US Navy's 5th Fleet, which patrols the Mideast and operates from a base in Fujairah, has repeatedly declined to comment.

The US already had warned ships that ‘Iran or its proxies’ could be targeting maritime traffic in the region. America is deploying an aircraft carrier, USS Abraham Lincoln, and B-52 bombers to the Persian Gulf to counter alleged, still-unspecified threats from Tehran.

US will act to protect sovereignty if threatened by China

Earthquake toll in Turkey, Syria rises to more than 4,300

Toll rises to over 2,300 in quake-hit Turkey, Syria