Save us from Russia: ‘Sex expert’ says will spill info on Trump to get out of jail

Claiming that she had first hand information on the link between Donald Trump and Kremlin Vashukevich asked for help after being arrested in Thailand. (Photo: Instagram/ nastya_rybka.ru)

Moscow: The ever complicated probe into Russian meddling in US presidential elections 2016 takes another bizzare turn.

‘Sex expert’ and escort service worker Anastasia Vashukevich claims she could give US intelligence service information in exchange for help, in the wake of her arrest in Thailand, the Washington Post reported. 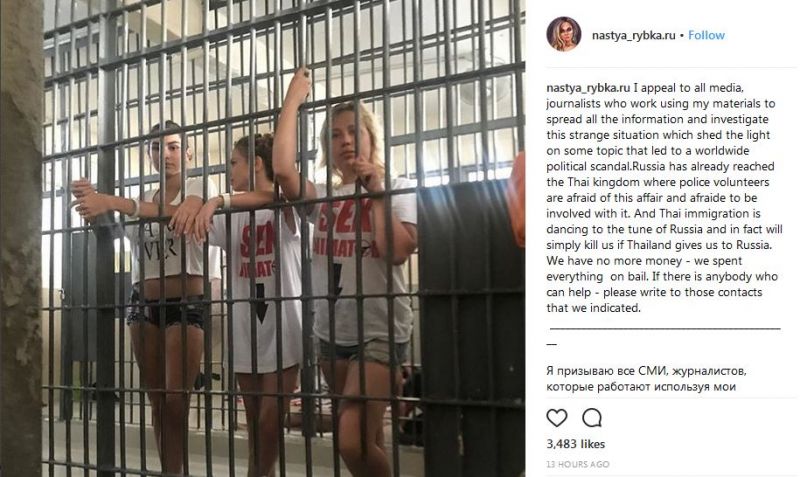 Vashukevich was earlier in the news for her videos which brought to light the ties between Russian billionaire Oleg Depriska and Deputy Prime Minister Sergei Prikhodko.

Claiming that she had first hand information on the link between Donald Trump and Kremlin Vashukevich asked for help after being arrested in Thailand during a weekend raid on a ‘sex seminar’ which she was participating in.

Vashukevich better known as Nastya Rybka, had an affair with Deripaska who she alleged hired ex-Trump aide Paul Manafort.

On Tuesday, in a live Instagram video Vashukevich said, "I am the only witness and the missing link in the connection between Russia and the US elections - the long chain of Oleg Deripaska, Prikhodko, Manafort, and Trump."

She is seen being driven off in an open-air police van through a Pattaya resort. "In exchange for help from US intelligence services and a guarantee of my safety, I am prepared to provide the necessary information to America or to Europe or to the country which can buy me out of Thai prison," she said.

In the video, she claims having already given an interview to US broadcaster NBC.

Vashukevich shot to fame in January when Russian opposition leader Alexei Navalny broadcast old videos from her Instagram account dating back to August 2016 in which Deripaska and Prikhodko are seen in a yacht.

Navalny used the footage to indicate possible ties between Deripaska, a metals magnate and Russia’s most influential official Prikhodko alleging that the latter had been bribed with women and a luxury getaway.

He also alleged that the two could have been the link between Trump and Kremlin, pointing to a possible collusion with Russia to influence American votes.

Prikhodko lambasted Navalny calling him a “political loser” whereas Deripaska rubbished the nationalist democrat’s claims and sued him for “violating his privacy” saying, “Navalny's allegations have nothing to do with reality.”

A court ordered Instagram to remove some of Vashukevich's posts.

Vashukevich who was in Dubai when Navalny made the videos public travelled to Thailand after. On Sunday, according to reports in Russian media, Thai police raided a sex seminar for Russian tourists wherein they arrested her.

Vashukevich and several others had been detained for being part of an "illegal training session," the Russian embassy consul Vladimir Sosnov told Russian state news agency RIA Novosti.

However, the high-society escort claims that the arrests were made under orders from Russian officials in lieu of Deripaska and Prikhodko’s videos and that she was expecting to be deported back to Russia, where she’d be jailed again.

Russia's most important security and intelligence officials including Security Council Secretary Nikolai Patrushev, former head of the Federal Security Service were also in Thailand at the time of Vashukevich’s arrest.