A remain supporter stops to talk to people as he walks around with his European flag across the street from the Houses of Parliament in London. (Photo: AP)

London: Tens of thousands of Londoners on Friday signed a petition for their metropolis to stay in the European Union, as mayor Sadiq Khan said the city must have a say in Britain’s exit negotiations.

More than 40,000 people signed a petition on the change.org website saying: “Declare London independent from the UK and apply to join the EU”.

While Britain voted 52% in favour of leaving the EU in Thursday’s referendum, 60% of Londoners voted for Britain to stay. 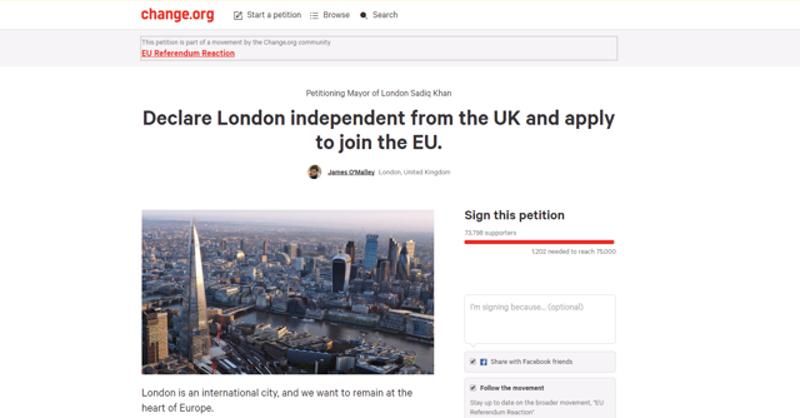 “London is an international city, and we want to remain at the heart of Europe,” the petition said.

“Let’s face it - the rest of the country disagrees. So rather than passive aggressively vote against each other at every election, let’s make the divorce official and move in with our friends on the continent.

“This petition is calling on mayor Sadiq Khan to declare London independent, and apply to join the EU,” it said.

Khan himself issued a statement on the negotiations for Britain’s departure from the EU.

“It is crucial that London has a voice at the table during those renegotiations, alongside Scotland and Northern Ireland,” the pro-EU mayor said.

“Although we will be outside the EU, it is crucial that we remain part of the single market,” he said.

“Leaving the single market of 500 million people - with its free-trade benefits - would be a mistake. I will be pushing the government to ensure this is the cornerstone of the negotiations with the EU,” he said.

Another petition entitled “London to remain part of the European Union” garnered over 9,000 signatures on change.org, saying the vote to leave the EU was “a vital decision that we don’t agree with”. 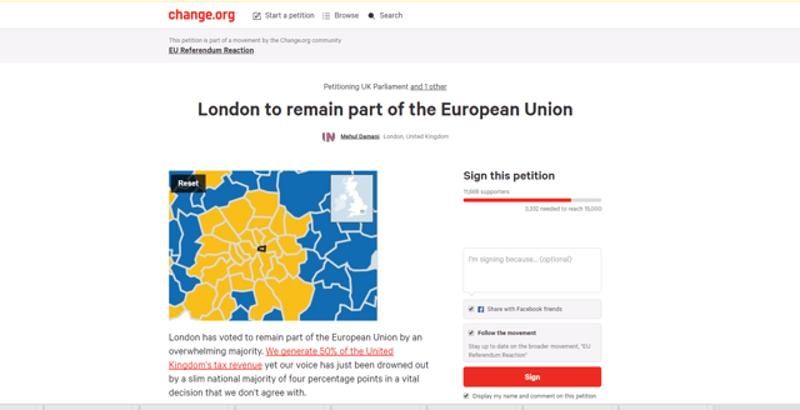 A Twitter account @London_Stays was also quickly set up and many people tweeted under the hashtag #londonstays in the wake of the vote.

“Really hoping we’re just out, not out out,” said Katy Ball. Another user tweeting as @ldn_republic wrote: “No longer British but a Londoner”.

“I am now officially all for Scottish independence, a united Ireland and the City-State of London,” Clare Fenwick tweeted.

Besides London, Scotland and Northern Ireland were the only other parts of the UK where a majority voted in favour of Britain staying in the EU.