Breivik said his solitary confinement had had negative effects on his health. (Photo: AP)

Oslo: Norwegian mass murderer Anders Behring Breivik on Wednesday won his lawsuit against the state over his "inhuman" solitary confinement in prison.

"The court has concluded that the prison conditions constitute inhuman treatment," the Oslo district court said in its ruling.

It said the rightwing extremist's almost five-year isolation in prison violated Article 3 of the European Convention on Human Rights.

Judge Helen Andenaes Sekulic ruled however that Breivik's right to correspondence, guaranteed by Article 8 of the convention, had not been violated.

Norway's most notorious inmate has been detained in a high-security prison unit since he massacred 77 people in a bomb-and-gun rampage in 2011, the worst peacetime atrocity in the country. 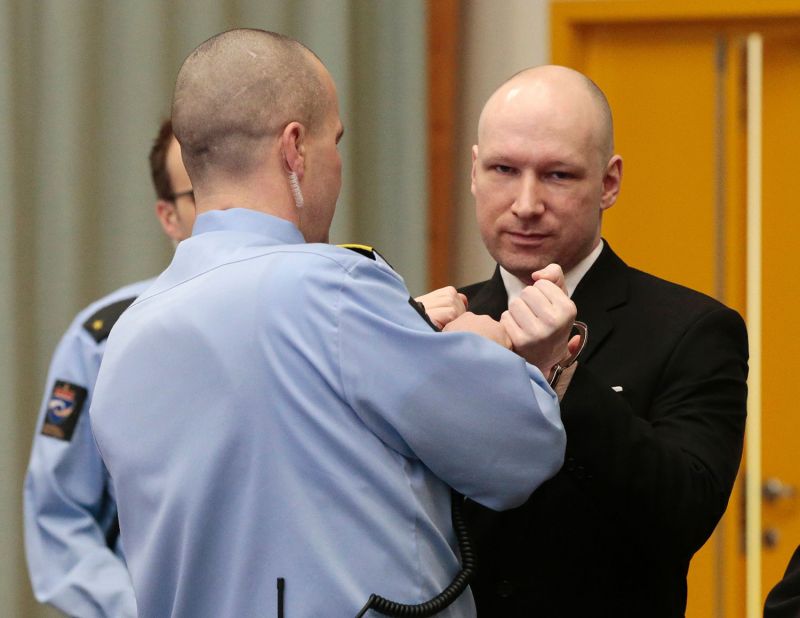 With a dark suit and shaved head, Breivik was led into the gym-turned-courtroom in the prison, where the trial is being held for security reason. (Photo: AFP)

The state's lawyers had argued that his isolation was necessary because Breivik is "extremely dangerous", and said his conditions -- which include games consoles, workout machines and three cells at his disposal for his various activities -- fell "well within the limits of what is permitted" under the European convention.

Breivik is serving a maximum 21-year sentence -- which can be extended if he is still considered dangerous -- for killing eight people in a bombing outside a government building in Oslo and then shooting dead another 69, mostly teenagers, at a Labour Youth camp on the island of Utoya on July 22, 2011.

Disguised as a police officer, he spent more than an hour hunting down the almost 600 youths trapped on the small island.

He put a bullet in the head of most of his victims, some of them up-and-coming leaders of Labour, Norway's dominant political party, which Breivik blamed for the rise of multiculturalism.

Breivik, 37, used the four-day hearings -- held in the gymnasium of Skien prison where he is being held about 130 kilometres (80 miles) southwest of Oslo -- to promote his extremist views.

After making a Nazi salute on the opening day of proceedings, he claimed he was now a Nazi who had renounced violence and even compared himself to Nelson Mandela.

Since his arrest on the day of the attacks, Breivik has been held apart from other prisoners and his contacts with the outside world, including visits and correspondence, have been strictly controlled.

He had accused the state of breaching two clauses of the European convention prohibiting "inhuman or degrading treatment or punishment", and guaranteeing respect for "correspondence". 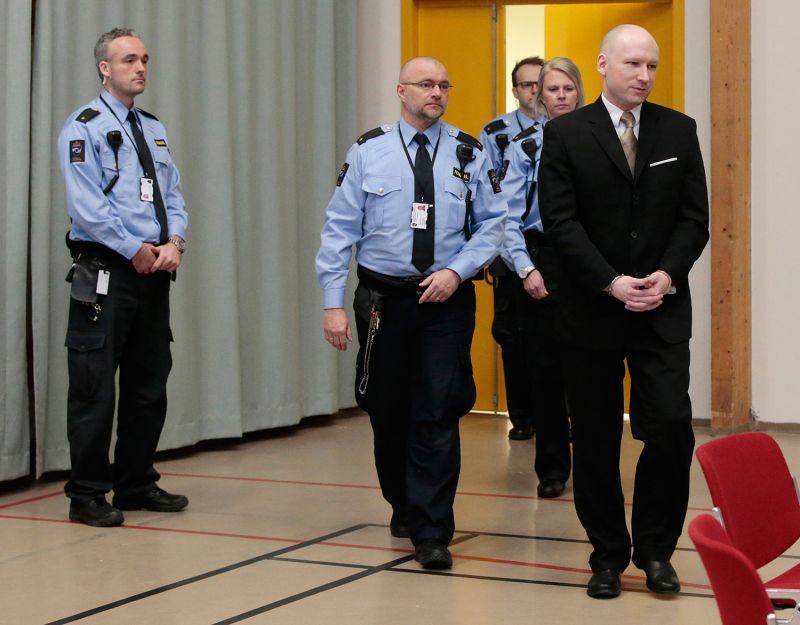 During his criminal trial four years ago, Breivik entered the court with his own salute, using a clenched fist instead of the outstretched hand that the Nazis used to greet Adolf Hitler. (Photo: AP)

His lawyer, Oystein Storrvik, had said during the hearings that the case was important as Breivik would probably spend the rest of his life behind bars.

Breivik said his solitary confinement had had negative effects on his health.

But doctors, psychiatrists and prison staff who examined him in prison testified they had seen no major change in his physical or mental state due to jail conditions.

Norway prides itself on a humane prison system aimed more at rehabilitation than punishment, and Breivik's conditions are considered comfortable by most.

The judges heard how Breivik has three cells at Skien Prison -- one for living, one for studying and one for physical exercise. He also has a television with a DVD player, a games console, a typewriter, and books and newspapers.

The prisoner is "extremely dangerous" and must not be allowed to communicate with supporters who may carry out new attacks, authorities said, as they defended their use over the years of handcuffs, strip searches and strictly-controlled correspondence and visits.

"I think it's a strict regimen but based on the explanations given for it, I can't see anything to suggest that the convention has been violated," law professor Kjetil Larsen told Norwegian news agency NTB before the ruling.

"But one could argue that we are close to the limit for the extent of the isolation," he added.