Brussels: Top Paris attacks suspect Salah Abdeslam, Europe's most wanted man, was wounded and captured in a dramatic raid by armed police in the Belgian capital on Friday.

Abdeslam, 26, and four other suspects were arrested in the gritty Brussels neighbourhood of Molenbeek, where the Franco-Moroccan allegedly helped plan the November 13 attacks in which 130 people died and 350 were injured.

Abdeslam was lightly wounded in the leg during the raid, prosecutors said.

"The battle against terrorism does not end tonight, even though this is a victory," French President Francois Hollande told a news conference in Brussels with Belgian Prime Minister Charles Michel.

"I think of the victims of November 13, because Salah Abdeslam was directly linked to the preparation, the organisation and unfortunately the perpetration of these attacks."

Hollande, whose embattled presidency will be defined by his response to the worst terror attacks on French soil, said Paris would request Abdeslam's extradition from Belgium "as rapidly as possible".

"Our fight is not over, and tomorrow morning, in the light of the information that has been given to me, I will chair a meeting of the defence council," Hollande said.

Michel, who rushed out of an EU summit for a crisis meeting with Hollande, said Abdeslam's capture was "extremely important in the battle for democracy against this abominable form of extremism."

Abdeslam and Choukri were fingerprinted by police in Germany on October 5, a month before the terror assault.

Choukri could also be a Soufiane Kayal who was pulled over by police on the Austrian border with Hungary in September, again with Abdeslam.

The only man known for sure to be still be on the run is Mohamed Abrini, who was filmed with Abdeslam two days before the attacks at a petrol station on a motorway close to Paris.

Former small-time criminal Abdeslam is believed to be the last surviving member of the 10-man jihadist team that carried out attacks on the Bataclan rock venue, restaurants, bars and the Stade de France stadium.

He apparently fled by car to his hometown Brussels the day after the rampage, having refused to blow himself up, and is believed to have spent much if not all of the subsequent four months in the city.

Prosecutors said Special Forces raided a house in Molenbeek on Friday because of evidence found in an operation in Brussels on Tuesday, in which a Paris-linked suspect died in a gun battle with police and two other people escaped. 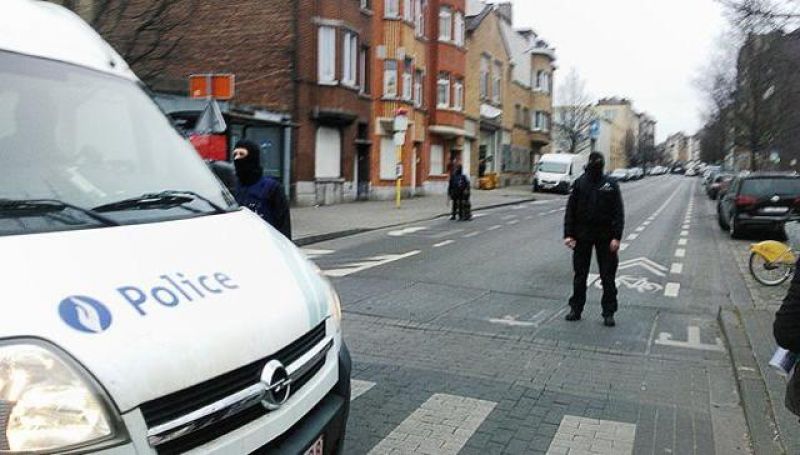 Belgian policemen stand guard the road during a police action in the Molenbeek-Saint-Jean district in Brussels. (Photo: AFP)

One of Abdeslam's fingerprints was found at the scene of Tuesday's raid, sparking the huge manhunt that led to his capture.

A witness told AFP the operation began at around 1530 GMT when dozens of police cars swooped into the rundown Molenbeek neighbourhood.

"I heard about three or four shots fired, but they were muffled, as if taking place indoors," said Karim, an Oxfam charity employee who lives in the largely Muslim Molenbeek.

Footage in Belgian media appeared to show a white-hooded Abdeslam being dragged to a waiting police car by armed special forces officers.

Belgium has been at the centre of the investigation into the Paris attacks almost from day one, and has been criticised for alleged blunders that let the perpetrators slip under the radar.

"Either Salah Abdeslam is very clever, or the Belgian services are stupid, which is more likely," said French minister Alain Marsaud, a member of an ongoing parliamentary inquiry into possible security failings over the November attacks.

With Belgium having arrested a series of people over links with Abdeslam, Hollande said many more were involved in the Paris attacks than originally believed.

Investigators believe Abdeslam hired one of the cars used in the attacks and then used it to drive suicide bombers to the Stade de France with the task then of blowing himself up.

But he apparently backed out, and an explosives-filled suicide vest was later found in Paris in an area that mobile phone signals indicated he had been in.

Police believe he fled across the border the next morning. Several people have been arrested on suspicion of helping him and his fingerprints were found in December at different Brussels apartments.

The ringleader of the attacks, IS member Abdelhamid Abaaoud, and attacker Bilal Hadfi, both dead, also had links to Molenbeek, a largely immigrant district which has been a hotbed of Islamist violence for decades.

Abdeslam and his brother, who blew himself up during the Paris assault, had run a bar in the area until it was shut down by the authorities a few weeks before the attacks.

Belgian authorities have meanwhile identified the man killed in the raid on Tuesday linked to Abdeslam as Algerian national Mohamed Belkaid, 35, who was living illegally in Belgium.

He was reportedly on a list of IS fighters leaked last week as a volunteer to commit a suicide bomb attack.

Prosecutors also said he was wanted in connection with the November attacks.

EU leaders to discuss rise of infections, spread of omicron