London: Downplaying the din surrounding his sensational arrest in London, absconding liquor baron Vijay Mallya who is on the run over money laundering charges, took a swipe at the Indian media.

Taking to Twitter after getting bail, Mallya took a swing at the media accusing them of 'hyping' the development. 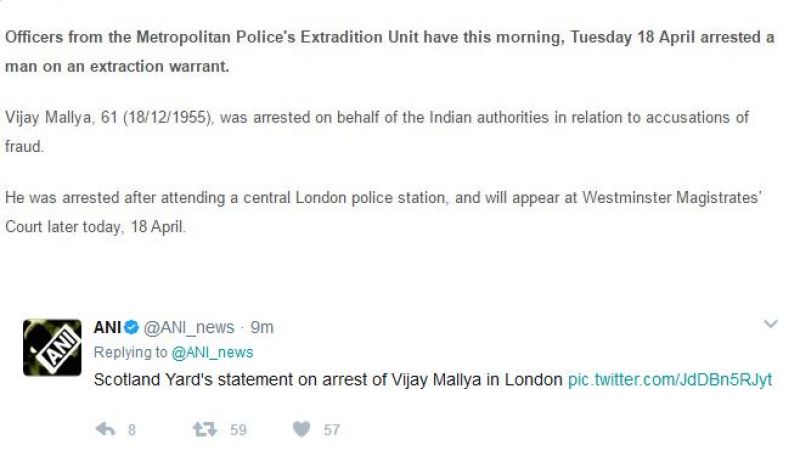 Earlier on Tuesday, following Mallya's arrest, the Scotland Yard issued a statement saying that the absconding businessman was arrested on behalf of the Indian authorities in relation to accusations of fraud.

"Officers from the Metropolitan Police's Extradition Unit have this morning, Tuesday 18 April arrested a man on an extraction warrant. He was arrested after attending a central London police station, and will appear at Westminster Magistrates' Court later today, 18 April," read the official statement of the Scotland Yard.

His arrest came after a Delhi court had issued an open-ended non-bailable warrant against Mallya in connection with the the 1995 FERA violation case.

Last month, the Ministry of External Affairs (MEA) informed that extradition of absconding liquor baron Vijay Mallya has been stratified by Secretary of State of the U.K. Government and soon a warrant would be released against him.

"Somewhere in the month in the month of February, the home office of the U.K. Government conveyed that India's request for extradition of Mallya has been stratified by Secretary of State and sent to Westminster Magistrate court for a district judge consider issue of releasing of warrant," MEA official spokesperson Gopal Bagley told the media.

A bench of Justices A.K. Goel and U.U. Lalit reserved its order on whether or not Mallya was guilty of contempt and what action should be taken to bring back the money.

The court concluded the proceedings after a three-and-a-half-hour hearing during which the Centre contended that Mallya was mocking the Indian system after fleeing the country. It said the government was holding talks with U.K. authorities to get him deported.

The apex court had started proceedings against Mallya a year ago and had issued notice to him on March 8, 2016 on a plea by a consortium of banks led by the State Bank of India (SBI) for recovery of about Rs. 9,000 crore which the businessman and his companies owed to them.

The liquor baron, however, fled the country days before the apex court took up the case against him.

UN meeting produces sense that a 'new epoch' is arriving