Horses raced and jumped around the arena while soldiers in extravagant dress paraded and fired antique guns, overlooked by stands filled with 6,000 spectators. (Photo: AP)

The show, which featured over 900 horses and 1,500 performers, capped three days of celebration at the castle to mark the monarch's April 21 birthday milestone.

Her son Prince Charles, who is first in line to the throne, wrote a message paying tribute to his mother's love of horsemanship, which has seen her thoroughbreds win numerous British races.

"I am delighted that we have succeeded in bringing together hundreds of members of the Armed Forces of the United Kingdom, the Commonwealth and other long-standing overseas friends to mark this special birthday," Charles wrote.

"It could not be more fitting that a quite different group which also enjoys the Queen's unfailing interest and support -- horses, of myriad breeds and colour -- will join the 600, sailors, soldiers, airmen and women who make up this evening's celebration."

Broadcast on ITV, the show featured archive footage telling the story of the queen's life, interspersed with live horse performances accompanied by music in a sandy arena in the grounds of Windsor Castle, near London.

The Queen and her husband Prince Philip arrived in a carriage before taking their seats in the royal box, surrounded by members of their family including Prince Harry, Prince William and his wife Kate. 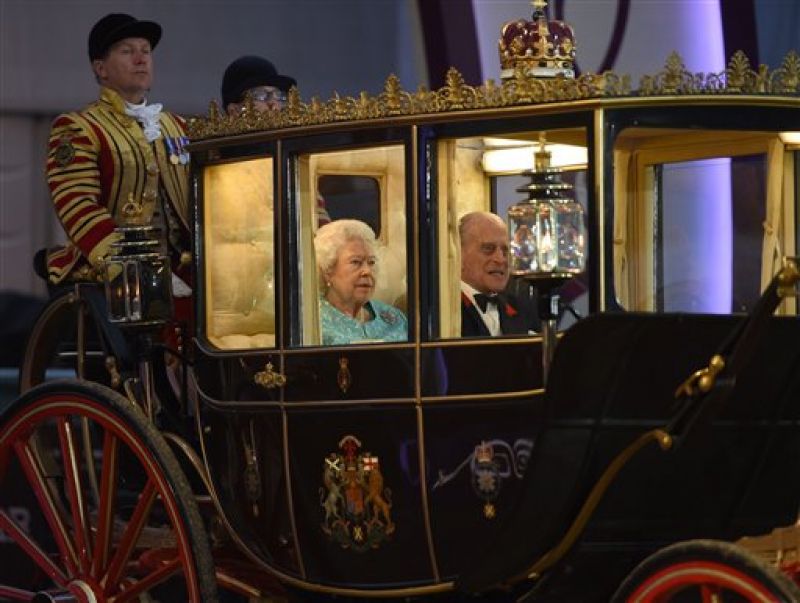 Queen Elizabeth II and Prince Philip arrive in the Scottish State Coach during the televised celebration of the Queen's 90th birthday in the grounds of Windsor Castle in Berkshire, Britain. (Photo: AP)

Horses raced and jumped around the arena while soldiers in extravagant dress paraded and fired antique guns, overlooked by stands filled with 6,000 spectators.

Among the highlights was an acrobatic and glittering display by the Royal Cavalry of Oman, accompanied by bagpipes, while Swiss performers marched as sparks shot from their twirling red-and-white flags.

Elsewhere during the show, unsaddled horses were led in formation by the horse whisperer Jean Francois Pignon, who made a small white pony walk on its two hind legs.

There was also plenty of musical entertainment on offer, with Gary Barlow of British pop group Take That opening the show and Australia's Kylie Minogue singing her hit "I Believe In You".

James Blunt performed "Bonfire Heart" while actors including Helen Mirren, who won an Oscar for portraying Elizabeth in "The Queen" 2006, spoke about periods from the monarch's life.

Singer Shirley Bassey closed the event with the James Bond song "Diamonds are Forever", dressed in a sparkling gown.

But the final performance came from the crowd, which ended the night by singing "Happy Birthday" followed by the national anthem "God Save the Queen".

The sovereign, who has been on the throne since 1952, overtook her great-great-grandmother queen Victoria to become Britain's longest-serving monarch last year.

The date of Elizabeth's birth was marked by military gun salutes around the country last month, but traditionally monarchs also have "official" birthday events in the summer months.