The man's wife, who discovered about the sale two days later, said that she wanted to kill him. (Photo: YouTube Screengrab)

Wakefield, Yorkshire: A husband took a prank to the next level when he put his wife on sale on eBay -- and was stunned when the bids for his wife topped the average price of a Jaguar.

According to a report in the Daily Mail, the father of two posted a picture of his wife on eBay along with reasons for putting her up on sale. He also mentioned the pros and cons of the purchase.

The pros and cons included her cooking skills and her bodywork. He also described her as 'not new has been used but still got some good miles left in her.'

Titled, 'Used Wife', the man also posted a note saying that his wife was unsympathetic towards him when he told her that he was feeling unwell. 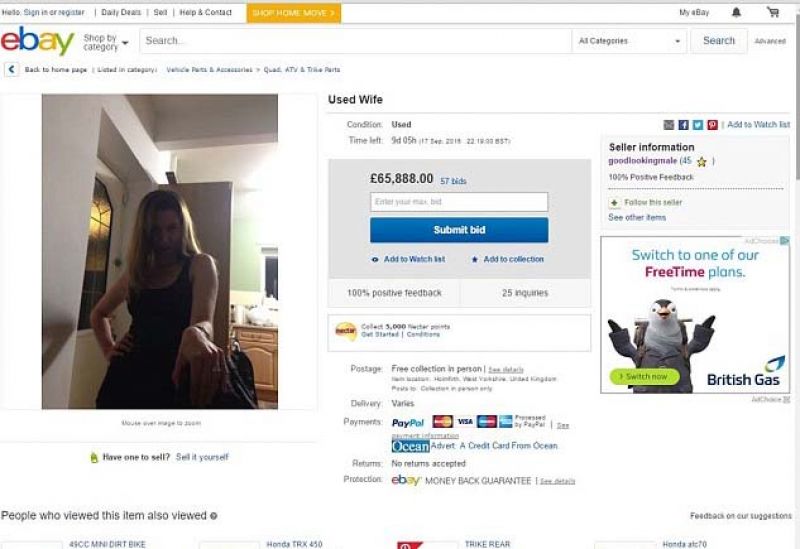 "For sale one wife.

'Not new has been used but still got some good miles left in her.

'Reason for selling* I've had my fill and feel like there HAS to be someone me (oh dear God please let there be).

'Good points: Body work and paint work still in decent shape and has some skills in the kitchen.'Bad points: Often makes this noise that cannot be silenced unless you order brand new shiny parts of metal.

'Sometimes them [sic] skills in the kitchen result in you ending up in hospital.
'All in all not a bad model for the year, I'm sure some lucky guy will get lots of use.

'Offers welcome, may consider a part exchange for a younger model.

'*T&Cs: Once bought you cannot return* EVER!'

But little did he know that his prank would win bids worth more than the price of a Jaguar.

His wife, who discovered about the sale two days later, said that she wanted to kill him. "Everyone at work saw it and were laughing their heads off. Not only did he put me up for sale but he used such a bad photo," his wife was quoted as saying.