Ramadan a challenge for migrants trapped in Greece

Muslim men pray at the refugee and migrant camp of Schisto in Athens. (Photo: AFP)

Schisto, Greece:  Expecting twins in a few months, Shahnaz Sadat is not obliged to fast for Ramadan -- but stuck in a migrant camp in Greece, she'd be hard put to even if she wanted to.

"Every night, every time the food is potato. But we can't eat it," said the 22-year-old, who is four months pregnant.

"How can we follow the Ramadan with this food? Food is not good. Especially for women, for children, for pregnant women, for all of them," she told AFP at the army-run camp of Schisto near Athens.

And for drinking water, they have to queue at the bathroom sink, she said.

Previously a disused army base in Athens' industrial zone, Schisto houses 1,700 people of all ages, the vast majority from Afghanistan.

Around 700 have expressed an interest in fasting, according to authorities in the area.

No figures are currently available for the other camps housing over 45,000 people who became trapped in Greece when Balkan nations began shutting their borders to migrants in February.

Greek officials say those fasting are given their sundown meal together with the pre-dawn meal, which they can pack away and eat at their discretion.

"There is a concerted effort to deal with a situation whose scale is unprecedented in Greece," a government source said.

"We checked this with migrant communities and with religion experts from the education ministry," the government official said.

"Clear instructions have been sent to camp overseers on the topic...we are providing high nutrition value food that can also be kept out of the fridge," the official added.

Schisto's civilian supervisor Panagiotis Karakatsanis says that "things are slower" during the day as many of those who fast trying to conserve energy until dusk.

But in the warm summer sun, the tents become so hot that it is difficult to rest, says Shahnaz.

"The tent becomes so warm, so hot," she said.

To commemorate the divine revelation received by the Prophet Mohammed, during Ramadan, faithful Muslims abstain during daylight hours from eating, drinking, smoking and having sex.

At sunset they break the fast with a meal known as iftar and before dawn have a second opportunity to eat and drink during suhur. 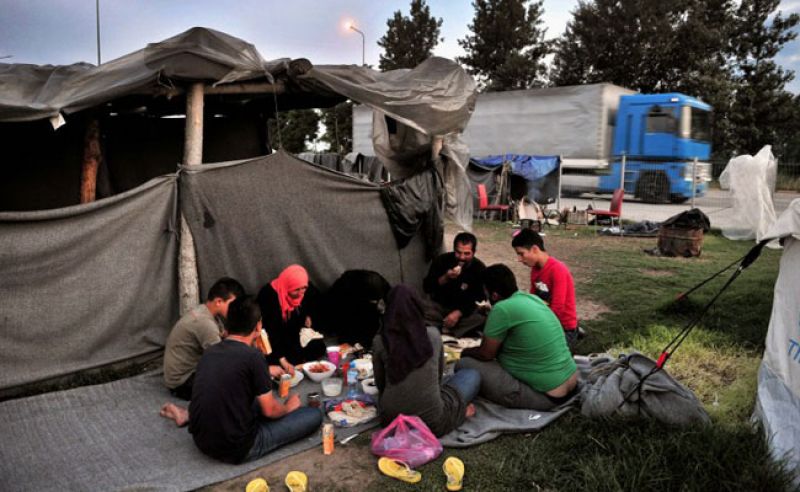 People eat on the ground after the sunset at a makeshift camp for migrants and refugees in Polykastro. (Photo: AFP)

"Your soul must be under control. It's a little bit more difficult here," says Ahmad Tamim, a 22-year-old economics student from Kabul, reflecting on the discomfort of having spent the last four months in the camp.

Schisto is an open facility where migrants assigned there are free to come and go, but it lies several kilometres away from the nearest market.

Some enterprising residents board city buses to Piraeus but most rely on food from an army contractor, and opinion is divided over the quality.

"The food is all right, but it depends how demanding you are. It's not enough to fill up," Ahmad adds.

"When I was in Afghanistan I was with my family," said Mohammad Mahdi Ishag, a business graduate helping as a translator at the camp's infirmary.

"My mother prepared all the things and here I feel it more difficult because I have to prepare for myself food at night and in the morning. It's too difficult," he said.

Conditions are even harder for those on the road: migrants gathered in unofficial camps near the border with Macedonia, hoping to cross through with the help of smugglers.

At Polykastro in northern Greece, one such camp has emerged around a highway fuel station around 20 kilometres (12 miles) from the border.

Volunteers preparing iftar for the migrants are amazed when some come out of their tents carrying small gifts.

"They gave me croissants and fruit juice. I don't understand why they do it," said a Greek man helping to clean the camp.

Ayaz, a 31-year-old from Syria, explains that Ramadan "is a period that demands good deeds and generosity."

"For this reason they give to whoever they think is in need. Despite the difficulties there are those who follow the rules," he said.