From Kent to Raqqa: ISIS' 'White Widow' transforms her son into a killer

London: Speaking up for the first time, grandparents of 11-year-old Joe Dixon, who was seen killing Kurdish rebels in an ISIS video, claimed that he was kind and loving before he was taken to Syria by his mother Sally Jones, and did not know how he had changed.

Images of Joe, complete in camouflage, and shooting Kurdish rebels in the back of the head, sent Britain to a frenzy last week.

Joe was taken to ISIS-controlled territory in Syria late in 2013 by his mother Sally Jones, commonly known as ‘Mrs Terror’ and ‘White Widow’.

Speaking to Daily Mail under condition of anonymity, friends of the family revealed the distraught situation they were in.

"I felt sick to the stomach,” his grandmother reportedly said after watching the images, and added, “If there is a God, why can’t he stop it?”

Joe, who spent most of his weekends with his grandparents, had an inquisitive mind, acquaintances said, and added that spent much of his time with his pet rabbit, cat and his dog Rizzy. 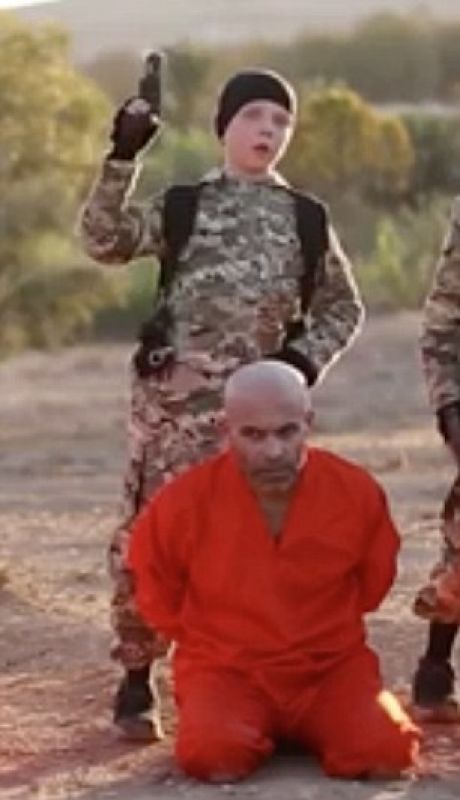 The child felt closer to this grandparents than his mother, the report claimed and added that he was worried about his mother’s plan to travel to Syria in the run up to his travel.

"He was having difficulty sleeping. His grandmother discovered that the thing that was worrying him was that his mother was planning a trip,” the acquaintance said.

Joe is the second child of Sally Jones. Her first son, born out of her on-and-off relation with one Jonathan Wilkinson, was 18 when she planned the move to Syria, but he refused to accompany her and chose to live with his father’s relatives.

Sally, who was born Catholic, converted to Islam a few years ago. She met 19-year-old jihadi Junaid Hussain through an online dating portal. The duo soon hit it off. As Junaid skipped bail and fled to Syria in 2013, Sally followed suit, with her son. She informed everyone that she was going for a vacation to Turkey, but crossed over from Turkey to Idlib in North West Syria.

She is later believed to have shifted from Raqqa to Mosul, where Joe is believed to be held.

Joe, who was in Raqqa with Sally and Junaid, called his grandparents only once, but was monitored during the conversation. “She (the grandmother) had so much she wanted to ask him but she could hear the boy was being cautioned by his mother in the background. He must have looked around to her for permission to answer the questions his grandmother was putting to him because she could hear Sally’s voice going 'no' to many of them,” reports said.

Earlier in May this year, Sally had also posted an image of herself in a black burqa by the Tigris river, saying “Enjoying a beautiful summer with my son.”

But while Sally transforms her son into an ISIS foot soldier, Joe’s grandparents back in England are distraught and have lost all hope of seeing their grandson ever again.

"There can be no doubt now that the grandchild they doted on no longer exists. He is gone for ever, transformed beyond recognition by his evil mother and her ISIS cohorts,” family friends said.

Only English speaking people will get UK visa

Too early to say Covid-19 less deadly than SARS: WHO

Only English speaking people will get UK visa