With many offenders in their teens or early 20s, east London has preempted new legislation by asking shopkeepers to challenge young people buying acid and refuse sales if they are suspicious of customers’ intentions. (Photo: AFP)

London: Delivery rider Jabed Hussain was waiting at a traffic light one night in east London when two attackers sprayed acid in his face and stole his moped.

It was one of hundreds of attacks in the British capital every year that have prompted government intervention and left the city’s police force asking the public for help to tackle the crime wave.

Hussain recalled feeling “burning on my face” during the robbery in Hackney.

“If they want to take my bike, there are a lot of weapons... why (have) they got to choose the weapon of acid?” he said as he returned to the spot where the attack happened.

The number of assaults is increasing rapidly.

Hussain suffers from chest problems after swallowing water which he believes contained traces of the acid, although his helmet protected much of his face and he has no visible scars.

A pizza delivery driver attacked in north-east London last month was not so lucky, left in a critical condition after being sprayed with acid while his helmet visor was up. 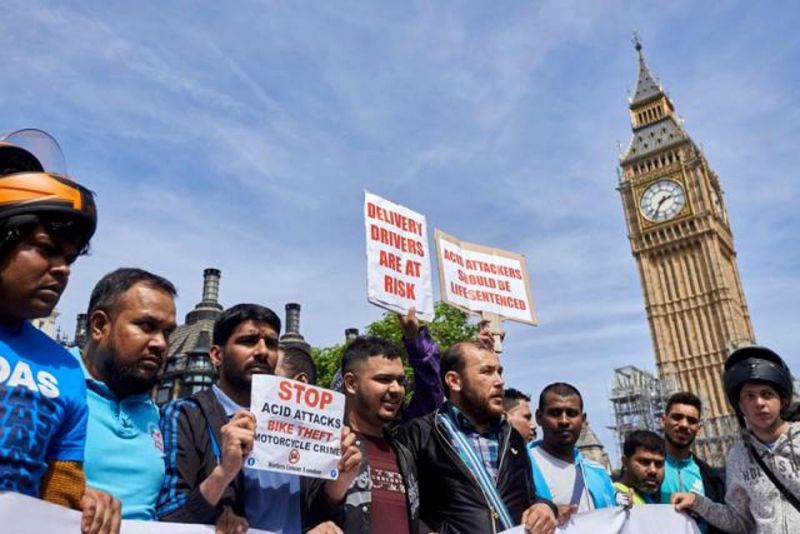 Motorcycle delivery drivers and motorcyclists taking part in a demonstration in Parliament Square in central London on July 18, 2017, following a spate of acid attacks on July 13. (AFP Photo)

“Because when you take into account the devastation of such an attack, it requires an enormous amount of strength to go through and recover,” he said.

Shah blamed the increase in attacks on a lack of regulation to stop people buying acid, although he noted the recent cases have “concentrated the minds of government officials”.

Home Secretary Amber Rudd announced new proposals in October to force people carrying acid to prove they have a legitimate reason, taking the same approach used to tackle knife violence where possession of the weapon alone is criminalised.

MP Stephen Timms called for the changes in parliament in July, after his east London constituency of East Ham suffered a spate of attacks.

His intervention followed an attack against two cousins who were sitting in their car in Beckton, leaving both with life-changing injuries.

“What we cannot do is allow a situation where people feel scared to walk around the streets,” he said in his local library.

“And that’s the position we were getting into after that attack on the two cousins, people just thought it wasn’t safe to walk up and down the road anymore.” 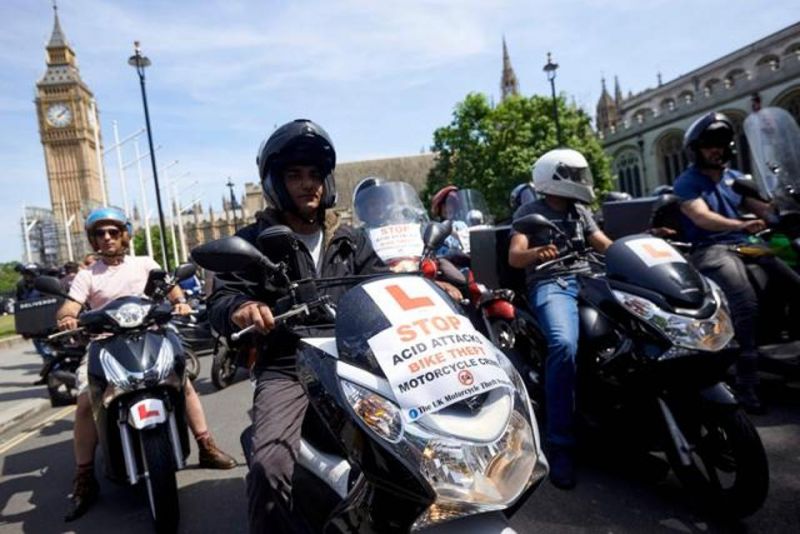 Motorcycle delivery drivers and motorcyclists taking part in a demonstration in Parliament Square in central London on July 18, 2017. (AFP Photo)

With many offenders in their teens or early 20s, East Ham’s borough of Newham in east London has preempted new legislation by asking shopkeepers to challenge young people buying acid and refuse sales if they are suspicious of customers’ intentions.

“The response in Newham has been really positive... Shopkeepers are actually very happy to be involved in addressing this problem,” said Timms.

While police have had some success in confiscating acid on the streets, Hackney’s borough commander Simon Laurence appealed to parents, teachers and social workers to ask young people what they’re carrying in plastic bottles.

“What’s in it? Why are they carrying it? Because the police can’t stop this alone, and we need the help of the community,” he said outside Mangle nightclub in east London, where 22 people were injured in April with a substance the same strength as hydrochloric acid.

“It melted their skin, and they would have been in horrendous pain. Some of those victims will have life-changing injuries that they will be reminded of every day,” Laurence said, after a 25-year-old man was convicted over the attack.

London police carry acid response kits to treat victims and Laurence said the force wanted to be able to test substances on the streets.

“The bit we’ve got to be able to get better at is identifying what’s in the bottle when someone’s carrying it - and to stop people thinking they’re able to use it to cause such horrendous injuries.”

Fearful of returning to work, Hussain thinks more still needs to be done to make people realise the devastating impact of such a weapon.

Explainer: What are US options for sanctions against Putin?

US orders 8,500 troops on heightened alert amid Russia worry

WHO chief warns against talk of 'endgame' in pandemic