A resident smokes in a communal flat in Saint Petersburg. (Photo: AFP)

: A leftover from the Soviet era, the communal flat or "kommunalka" with bathroom and kitchen shared by a dozen or so residents is very much alive in 's historic city of .

More than 25 years after the fall of the , these overcrowded dwellings are now admired as a unique - if disappearing - cultural phenomenon, featured on guided tours and discussed at academic conferences.

The former imperial capital has even started up its own kommunalka festival run by a group of local artists. 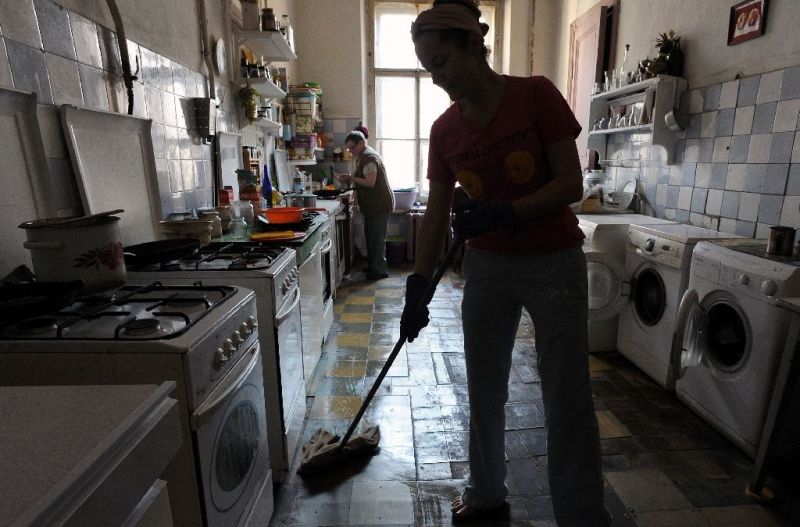 A resident mops the floor at a communal flat in central St. Petersburg. (Photo: AFP)

"Communal flats are part of the history of our country and of our city," said one of the festival organisers Svetlana Vorobyova.

"Even though they are still numerous in , they are on the way out."

She herself lives in one, a fairly small, three-room apartment which was among a few opened up to the public for this year's festival.

Her "neighbour", 75-year-old Eduard Yemelyanov, has lived in the flat in the central Petrogradskaya district for 15 years. Wearing an undershirt and baggy shorts - "just like every day" - he happily spoke with visitors.

"I really like communal flats and I wouldn't want to live anywhere else," he said. "You're never alone. There's always someone around and that's good."

Communal flats became a mass phenomenon in Russia after the 1917 Bolshevik Revolution, when factory workers and peasants flocked to cities and were housed in spacious apartments of well-to-do families, who themselves were often relegated to a single room after the space was partitioned off to make room for others. 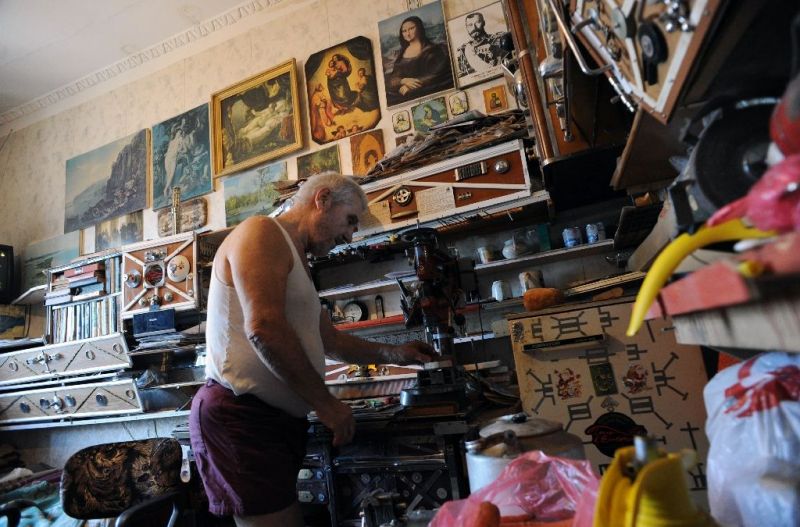 In , renamed by the Soviets, these flats were still used up to the 1980s, when they accounted for almost 40 percent of the apartments in the historic centre.

In , where the city centre was massively rebuilt in the Soviet era, there were far fewer communal flats and practically none are left.

After the end of the Soviet era, a new generation of wealthy Russians snapped up communal flats - often in an advanced state of disrepair - and paid to rehouse residents in small, individual flats in the suburbs.

In 2008, Saint-Petersburg authorities launched a programme aimed at moving out all the inhabitants of communal flats - which can have up to 10 rooms - to bring an end to the Soviet tradition.

In the following seven years, the number of such flats in the city of five million fell from 116,000 to 83,000, according to official figures.

Today, many families who own rooms in communal apartments no longer live there themselves but rent them out to students, out-of-towners and migrant workers.

Two sides of the Kommunalka

Another kommunalka dweller, 39-year-old Anna Fyodorova, also opened her room with huge windows and a panoramic view of a central street to visitors for the festival. There is a corner fireplace - no longer functioning - and stunning, 3.5 metre-high ceilings.

But she has to share a kitchen, bathroom and toilet with the 10 people living in the flat's seven other rooms.

The small bathroom and toilet with old, worn fittings are at the end of a long, dark corridor along with the large kitchen where at least one neighbour can be found at any given time.

The kitchen has four gas cookers and eight small tables and fridges - one for each room.

"A communal flat has two sides: there are wonderful things along with nasty things," said Fyorodova, an artist who arrived from the southern city of four years ago.

While it's an advantage to be in the city centre in a smart building from 1905, "of course, some things are complicated."

"For me, a person from the south who is very emotional, it was hard at first to find a balance in everyday life in the kommunalka," she said, admitting that relations with others in the flat can be strained.

On cue, her 40-year-old neighbour Nadezhda came out in a bright pink T-shirt to complain about festival visitors tramping through.

"You see, Anna, I've just washed the floor and your visitors have already got it dirty," she said, sighing.

"I warned my neighbours I was going to take part in the festival, but not all of them were happy," Fyodorova said.

Two of those on the festival tour, sisters Kira and Svetlana, aged 45 and 48, said they attended out of nostalgia.

"We grew up in a flat similar to this, It was a six-room flat with 18 neighbours," Svetlana remembered.

"In reality, there wasn't anything romantic about everyday life. I wouldn't go back for anything in the world," said Kira.

WHO chief warns against talk of 'endgame' in pandemic

Pfizer CEO says Omicron-targeted vaccine to be ready by March