Weeks ago, Prime Minister Scott Morrison's conservative Liberals had been heading for an electoral drubbing. (Photo:AP)

Sydney: Australians flocked to the polls Saturday capping a bitterly fought election that may be the first anywhere decided by climate policy.

Between 16 and 17 million people are expected to vote across the vast island-continent, with the opposition centre-left Labor party tipped for victory. Casting his ballot in Melbourne, would-be Prime Minister Bill Shorten was bullish about forming a majority government after a final poll showed his lead increasing.

"Today is the people's day," he said. "Be it buying a 'democracy sausage', the kids having a bit of a sugar cake or what have you, and voting." "In the event that the people of Australia voted to stop the chaos and voted for action on climate change, we will be ready to hit the ground from tomorrow."

Weeks ago, Prime Minister Scott Morrison's conservative Liberals had been heading for an electoral drubbing. But he has closed the gap with a fiercely negative campaign -- backed by powerful right-wing media -- targeting older, wealthier voters who face fewer tax breaks under Labor.

On the eve of the election, Morrison predicted it would be "the closest election we've seen in many, many years". But anger over his government's inaction on climate change may prove the difference between the two parties. 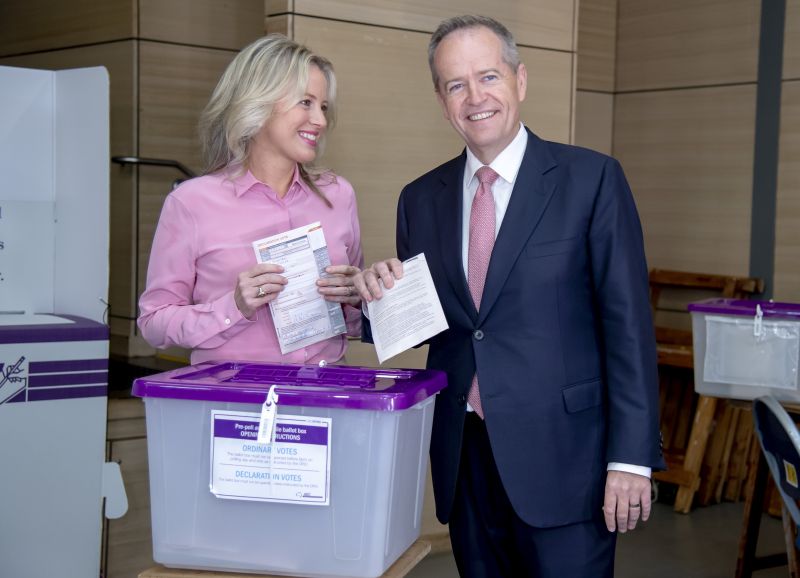 Australian opposition leader Bill Shorten poses as he votes with his wife Chloe during a federal election at Moonee Ponds West Primary School in Melbourne, Australia, Saturday, May 18, 2019.Polling stations opened across Australia on Saturday in elections that are likely to deliver the nation's sixth prime minister in as many years. (AP Photo/Andy Brownbill)

A season of record floods, wildfires and droughts have brought the issue from the political fringes to front and centre of the campaign. In traditionally more conservative rural areas, climate-hit farmers are demanding action. And in several rich suburbs, a generational shift has seen eco-minded candidates running Liberal party luminaries close.

In northern Sydney, former prime minister Tony Abbott -- who once described climate change as "crap" -- appears at risk of losing a seat he has held for more than two decades to independent challenger Zali Steggall, a lawyer and Olympic medallist in Alpine skiing. Early rising voters in the constituency trickled into a beachside surf club to cast their ballots, as volunteers wearing bright orange "I'm a climate voter" t-shirts handed out pamphlets.

"I'm worried about the climate and that Australia is not doing enough," volunteer Catherine Willis told AFP. Shorten has pledged quick legislation to increase renewable energy, while the Liberals said they would not risk the coal-fuelled economy's health to make the air cleaner. Australia is among the world's largest exporters of coal, providing thousands of jobs in the northeast of the country. 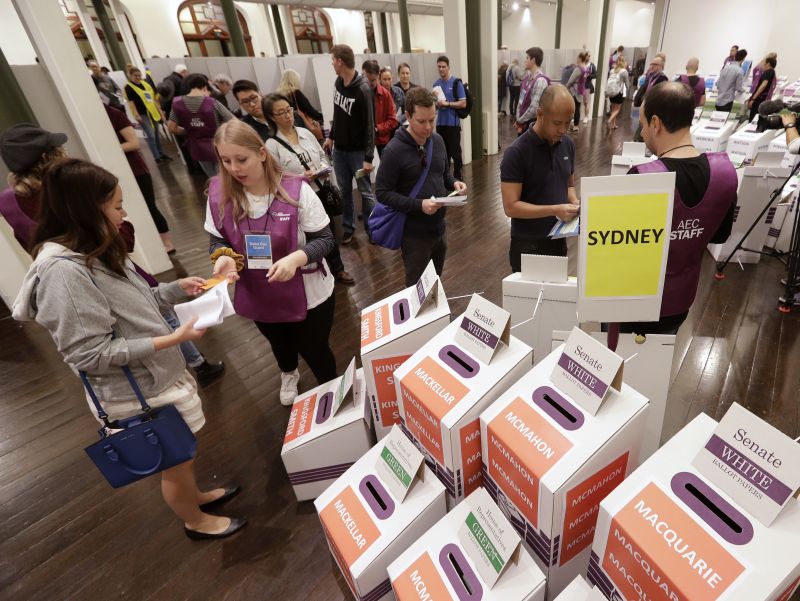 Voters cast their ballots at the Town Hall in Sydney, Australia, in a federal election, Saturday, May 18, 2019. Polling stations have opened in eastern Australia on Saturday in elections that are likely to deliver the nation's sixth prime minister in as many years. (AP Photo/Rick Rycroft)

A final survey by Newspoll published Saturday showed voters still deeply divided, with Morrison's coalition trailing Shorten's Labor 48.5 to 51.5 percent. The campaign has been an often ill-tempered pitched-battle. Candidates have been egged and abused, and a slew have resigned for racist, sexist and otherwise jaw-dropping social media posts.

In Abbott's battleground seat, a 62-year-old man was arrested and charged with thrusting a corkscrew into the stomach of someone putting up campaign banners on the eve of the election. If Morrison wins, it would be a monumental comeback, having scraped for his political life in the hope of not entering the history books as one of the shortest-serving prime ministers in Australian history.

He took office last August after a party room coup by conservative hardliners that ousted moderate pro-climate leader Malcolm Turnbull -- the latest in a series of political fratricides that have made Canberra politics look like "Game of Thrones" meets "The Hunger Games". Much of Morrison's cabinet has resigned or gone into virtual hiding during the campaign because of their unpopularity. 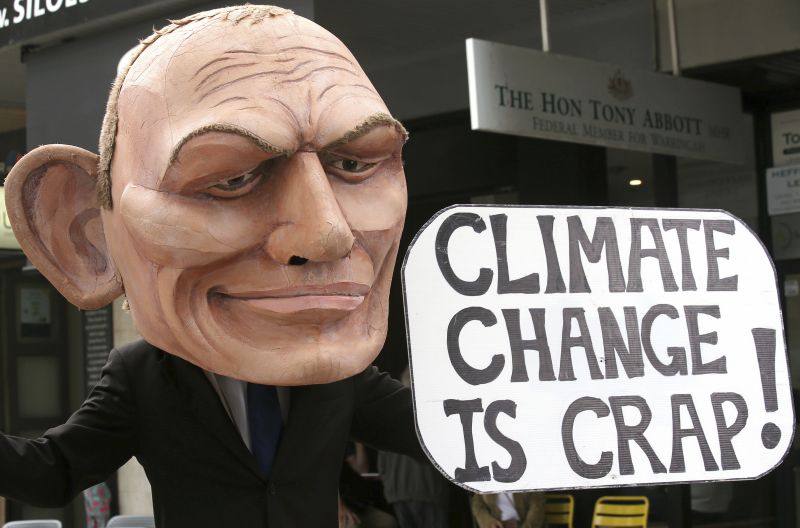 In this May 3, 2019, file photo, a demonstrator with a giant head in the likeness of former Australian Prime Minister Tony Abbott holds a sign referencing a comment by Abbott made in 2017 belittling the science of climate change, during a student organized protest at in Sydney. Australian elections is held on Saturday, May 18, 2019. (Photo:AP)

If Shorten is elected, he would become the sixth prime minister sworn into office in a decade. The former union leader has struggled with low personal approval ratings but has become a more polished campaigner as the election has neared. Still, his relative lack of charisma was underlined Thursday by the death of much-loved former Prime Minister Bob Hawke, an Oxford-educated lovable rogue, equally at home chugging a pint or debating Keynesian economics.

But the upswelling of sadness about Hawke's death could remind voters of less contentious times under Labor. Should Labor win, Australia will likely get a vote on becoming a republic and, as Shorten put it, returning a head of state that the country has borrowed from the other side of the world for more than two centuries.