Xi urged people to learn the lessons of hardship of the past. (Photo:AP)

Beijing: China must prepare for difficult times as the international situation is increasingly complex, President Xi Jinping said in comments carried by state media on Wednesday, as the country faces increased tariffs in a bitter trade war with Washington.

The two countries are locked in tit-for-tat tariff increases on each other’s imports, after talks broke down to resolve their dispute. Acrimony has intensified since Washington last week blacklisted Chinese telecom equipment company Huawei Technologies Co Ltd, a potentially devastating blow for the company that has rattled technology supply chains and investors.

During a three-day trip this week to the southern province of Jiangxi, one of the cradles of China’s Communist revolution, Xi urged people to learn the lessons of hardship of the past.

“Today, on the new Long March, we must overcome various major risks and challenges from home and abroad and win new victories for socialism with Chinese characteristics,” state news agency Xinhua paraphrased Xi as saying. “Our country is still in a period of important strategic opportunities for development, but the international situation is increasingly complicated,” he added. “We must be conscious of the long-term and complex nature of various unfavourable factors at home and abroad, and appropriately prepare for various difficult situations.”

The report did not elaborate on those difficulties, and nor was there a direct mention of the trade war or of the United States. 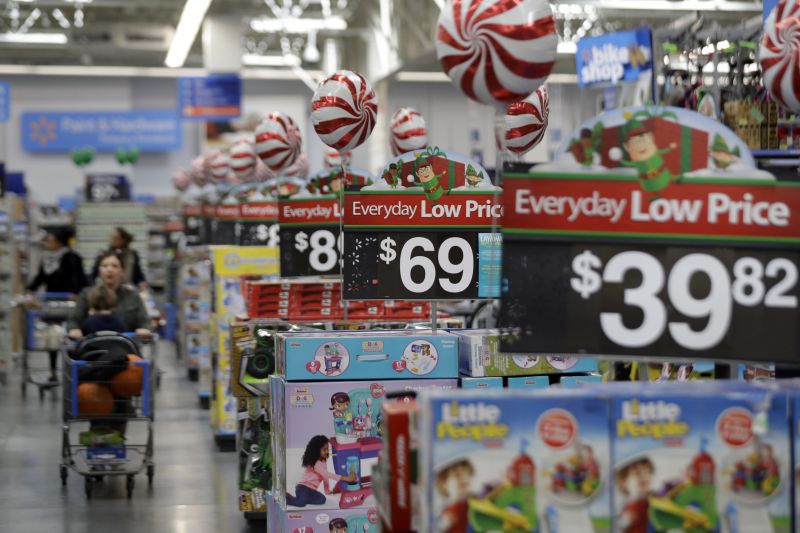 Photo, shows prices in the toy section at Walmart in Teterboro, N.J. An escalating trade war with China could mean higher prices on a broad array of products from toys to clothing. But some retailers will feel more pain than others, further deepening the divide between the winners and the losers that was evident in the latest earnings reports. Analysts say big box giants like Walmart and Target, which have had strong performances, are best positioned to absorb the higher costs because of their clout with suppliers. (AP Photo/Julio Cortez, File)

Xi also talked about the importance of technology, and “emphasised that technology innovation is the lifeblood of companies”. “Only by having indigenous intellectual property and core technology can products possessing core competitiveness be produced, and only then can an invincible position be attained amid fierce competition.”

China must master more core technologies and seize the “high ground” in industrial development, he added. Xi visited a rare earths firm too, sparking speculation the sector could be the next front in the Sino-U.S. trade war. Xi learned in detail about China’s rare earth resource situation, exploitation techniques, applications, and environmental protection measures, Xinhua said.

“Rare earths are important strategic resources, and are non-renewable resources.”

Europe row: Iran may pull out of N-deal

Japanese Billionaire Maezawa wants girlfriend to fly to the moon