A policeman stands on pavement reinforced with glue to prevent the bricks from being dug up and used as projectiles during expected protests outside the central government offices in downtown Hong Kong. (Photo: AFP)

Hong Kong: Paving stones in central Hong Kong have been glued down to prevent protesters from using them as missiles, as authorities roll out elaborate security measures ahead of a high-level Chinese visit that could stoke resentment over mainland rule.

The measures, which include barricades in central Hong Kong, come as Beijing tightens its grip on the semi-autonomous city where a fledgling independence movement in recent months has angered China.

Running battles with police in February, which included “localist” protesters in favour of more autonomy for Hong Kong, saw demonstrators dig up bricks from the street and throw them at officers.

Glue has been poured into the cracks between paving stones around the harbour-front convention centre where Zhang Dejiang, who chairs China’s communist-controlled legislature, will speak at an economic conference on Wednesday.

Explaining the decision to glue the pavement, Hong Kong’s highways department said they might be “subject to vandalism”.

A Hong Kong man linked to the city’s pro-democracy opposition was also arrested in China on Sunday over a suspected plot to use a drone to disrupt Zhang’s visit, according to Chinese state media.

Zhang is the most senior official to visit Hong Kong in four years in a trip seen as an attempt to ease tensions and gauge the political temperature -- he will meet with a group of pro-democracy legislators during his visit.

But some activists have voiced fury over the ensuing security clampdown, with water-filled plastic barricades and metal fencing cordoning off central roads and flyovers. 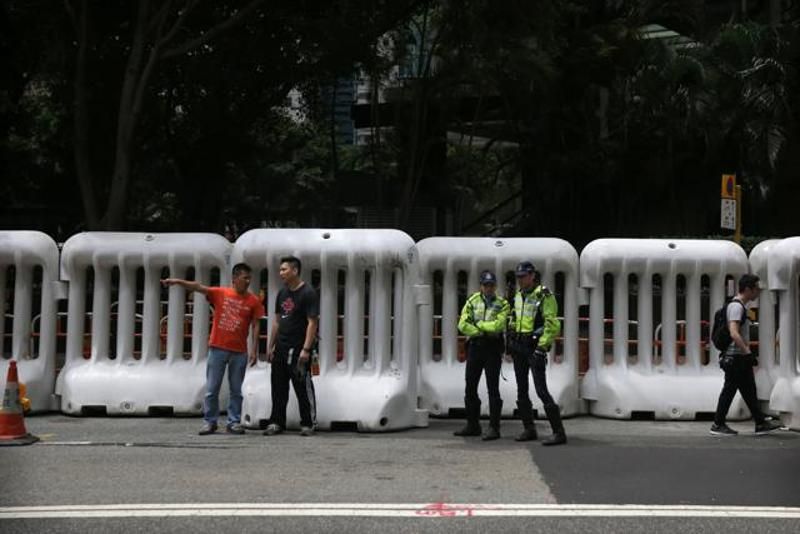 Police officers stand in front of large barricades erected along a road in Hong Kong as authorities prepare for possible protests. (Photo: AFP)

“Keeping protesters away is... ridiculous. It makes you feel like you are in North Korea,” said Sham Tsz-kit of Civil Human Rights Front, which organises Hong Kong’s major annual July 1 political rally where residents air their grievances against the government.

“Zhang Dejiang is coming here to understand the situation in Hong Kong but now his eyesight will be completely blocked.”

The group says activists will “proactively get close to the convention centre” despite a no-protest security zone set up by police.

“The security threat is higher than the past,” said a police source.

Some now say they will not stop at violence to force change.

Zhang’s visit is also expected to help Beijing assess whether unpopular city leader Leung Chun-ying is a viable candidate for a second term -- his current term ends in March.

Hong Kong is semi-autonomous after being handed back by Britain to China in 1997 and enjoys freedoms unseen on the mainland.

But there are growing fears that those freedoms are being eroded by Beijing.

All five men resurfaced on the mainland, where four are facing criminal investigation.