Vietnamese expatriates cheer while displaying placards during a rally by the Manila's baywalk before the Hague-based U.N. international arbitration tribunal is to announce its ruling on South China Sea. (Photo: AP)

Amsterdam/Beijing: An arbitration court ruled on Tuesday that China has no historic title over the waters of the South China Sea and has breached the Philippines' sovereign rights with its actions, infuriating Beijing which dismissed the case as a farce.

A defiant China, which boycotted the hearings at the Permanent Court of Arbitration in The Hague, vowed again to ignore the ruling and said its armed forces would defend its sovereignty and maritime interests.

And China's Defence Ministry said a new guided missile destroyer was formally commissioned at a naval base on the southern island province of Hainan, which has responsibility for the South China Sea.

"China will respond with fury, certainly in terms of rhetoric and possibly through more aggressive actions at sea." 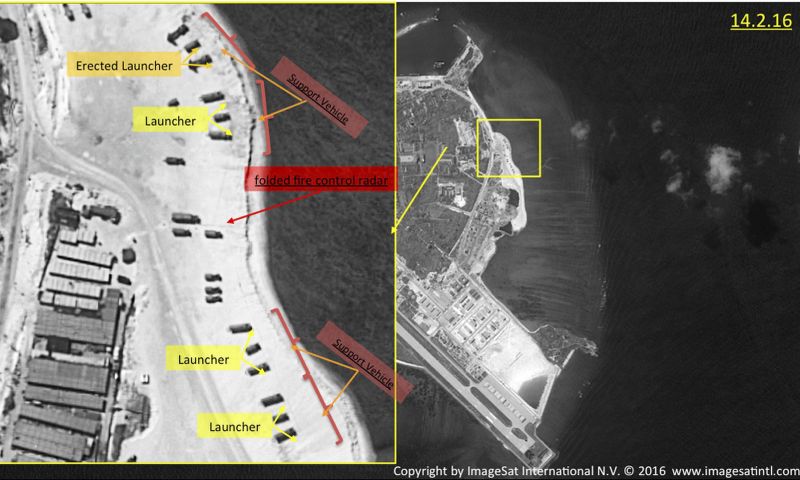 This image shows satellite images of Woody Island, the largest of the Paracel Islands, in the South China Sea. (Photo: AP/File)

India is "carefully studying" the verdict by an UN-backed tribunal. "India has noted the Award of the Arbitral Tribunal constituted under Annex VII of the 1982 United Nations Convention on the Law of the Sea (UNCLOS) in the matter concerning the Republic of the Philippines and the Peoples Republic of China and is studying it carefully," External Affairs Ministry said in a statement.

Our statement on the Award of Arbitral Tribunal on South China Sea Under Annexure VII of UNCLOS pic.twitter.com/T5FBdUPAAj

The United States, which China has accused of fuelling tensions and militarising the region with patrols and exercises, urged parties to comply with the legally binding ruling and avoid provocations.

"The decision today by the Tribunal in the Philippines-China arbitration is an important contribution to the shared goal of a peaceful resolution to disputes in the South China Sea," State Department spokesman John Kirby said in a statement.

US officials have previously said they feared China may respond to the ruling by declaring an air defence identification zone in the South China Sea, as it did in the East China Sea in 2013, or by stepping up its building and fortification of artificial islands.

China claims most of the energy-rich waters through which about $5 trillion in ship-borne trade passes every year. Brunei, Malaysia, the Philippines, Taiwan and Vietnam also have claims.

Finding for the Philippines on a number of issues, the panel said there was no legal basis for China to claim historic rights to resources within its so-called nine-dash line, which covers almost 90 percent of the South China Sea.

It said China had interfered with traditional Philippine fishing rights at Scarborough Shoal and had breached the Philippines' sovereign rights by exploring for oil and gas near the Reed Bank.

None of China's reefs and holdings in the Spratly Islands entitled it to a 200-mile exclusive economic zone, it added.

China's Foreign Ministry rejected the ruling, saying its people had more than 2,000 years of history in the South China Sea, that its islands did have exclusive economic zones and that it had announced to the world its "dotted line" map in 1948.

"China's territorial sovereignty and maritime rights and interests in the South China Sea shall under no circumstances be affected by those awards," it said.

However, the ministry also repeated that China respected and upheld the freedom of navigation and overflight and that China was ready to keep resolving the disputes peacefully through talks with states directly concerned.

In a statement shortly before the ruling, China's Defence Ministry said its armed forces would "firmly safeguard national sovereignty, security and maritime interests and rights, firmly uphold regional peace and stability, and deal with all kinds of threats and challenges".

The judges acknowledged China's refusal to participate, but said they sought to take account of China's position from its statements and diplomatic correspondence.

Vietnam said it welcomed the ruling. Taiwan, which maintains that the island it occupies, Itu Aba, is legally the only island among hundreds of reefs, shoals and atolls scattered across the seas, said it did not accept the ruling, which seriously impaired Taiwan's territorial rights.

The ruling is significant as it is the first time that a legal challenge has been brought in the dispute, which covers some of the world's most promising oil and gas fields and vital fishing grounds.

It reflects the shifting balance of power in the 3.5 million sq km sea, where China has been expanding its presence by building artificial islands and dispatching patrol boats that keep Philippine fishing vessels away.

The Philippines said it was studying the ruling. "We call on all those concerned to exercise restraint and sobriety," Foreign Affairs Secretary Perfecto Yasay told a news conference. "The Philippines strongly affirms its respect for this milestone decision as an important contribution to the ongoing efforts in addressing disputes in the South China Sea."

Japan said the ruling was legally binding and final. Oil prices jumped following the findings, with Brent crude futures up almost 3 percent at $47.87 per barrel.

The court has no power of enforcement, but a victory for the Philippines could spur Taiwan, Vietnam, Malaysia and Brunei to file similar cases.

Ahead of the ruling, around 100 members of a Philippine nationalist group demonstrated outside the Chinese consulate in Manila, calling on Beijing to accept the decision and leave the Scarborough Shoal, a popular fishing zone off limits to Filipinos since 2012.

In China, social media users reacted with outrage at the ruling. "It was ours in the past, is now and will remain so in the future," wrote one user on microblogging site Weibo. "Those who encroach on our China's territory will die no matter how far away they are."

Spreading fast on social media in the Philippines was the use of the term "Chexit" - the public's desire for Chinese vessels to leave the waters.