Mumbai/Singapore: In a historic summit, US president Donald Trump and North Korean leader Kim Jong Un signed a comprehensive joint document as they held the first-ever-meeting Tuesday morning in Singapore. In the joint text, Kim Jong Un has committed to 'complete denuclearisation of the Korean peninsula' while Trump has agreed to provide security guarantees to the Democratic People’s Republic of Korea (DPRK).

A meeting, which was closely watched across the world, seems to have narrowed down the differences between the two countries as the two firebrand leaders heaped praise on one another. The US president called Kim "a very talented man" who loves his country very much adding that they have "developed a very special bond".

The North Korean leader also hailed the "historic meeting" and vowed to leave the past behind.

The meeting at a luxury hotel in Singapore's Sentosa island came after months of diplomatic twists and turns.

The United States hoped the summit will pave way for complete denuclearisation of the Korean peninsula while North Korea saw the opportunity to get itself recognised as a player on the world stage.

Here are the LIVE updates on Donald Trump's meeting with Kim Jong Un:

13:56 pm: Our meeting been very, very good. By giving up its weapons and accepting commerce and embracing trade, North Korea has the potential to be an incredible place: Trump

Read: North Korea sanctions remain for now, may lift them in future: Trump

13:53 pm: Kim Jong Un has the chance to cease a better future for his country. Anyone can make war but only the most courageous can make peace: Trump

13:52 pm: We signed a very comprehensive document today and I think when he (Kim Jong Un) lands in North Korea he will start the process soon: Trump

13:50 pm: "We are prepared to start a new history. We are ready to write new chapters. The past does not have to define future, says US President Donald Trump.

13:49 pm: It is a great day and one of the greatest moments in the history of the world: Trump

13:48 pm: Want to thank Chairman Kim for taking a bold step for a bright future of his people. My talks with North Korean leader Kim Jong-un was honest, direct and productive, says Donald Trump.

12:30 pm: Convinced that the establishment of new US-DPRK relations will contribute to the peace and prosperity of the Korean Peninsula and of the world, and recognizing that mutual confidence building can promote the denuclearization of the Korean Peninsula, Donald Trump and Chairman Kim Jong Un signed a joint statement, reports reuters. The key points of the joint text are:

1. The United States and the DPRK commit to establish new U.S.-DPRK relations in accordance with the desire of the peoples of the two countries for peace and prosperity.

2. The United States and the DPRK will join their efforts to build a lasting and stable peace regime on the Korean Peninsula.

3. Reaffirming the April 27, 2018 Panmunjom Declaration, the DPRK commits to work towards complete denuclearization of the Korean Peninsula.

4. The United States and the DPRK commit to recovering POW/MIA remains, including the immediate repatriation of those already identified.

11:40 am: China praised the summit between US President Donald Trump and North Korean leader Kim Jong Un as historic and called for "full denuclearisation" to resolve tensions on the Korean peninsula, reports news agency PTI.

11:35 am: "We have developed a very special bond," Trump says on his meeting with Kim Jong Un.

11:33 am: Donald Trump says Kim is a very talented man who loves his country very much.

11:31 am: “We are starting that process very, very quickly,” says Donald Trump when asked if there was an agreement to denuclearise North Korea.

11:25 am: 'We'll meet again and we'll meet many times', says US President Donald Trump, when asked if he and North Korean leader Kim Jong Un will meet again in the future.

11:22 am: When asked if he would invite North Korean leader to the White House, US President Donald Trump says 'absolutely'. 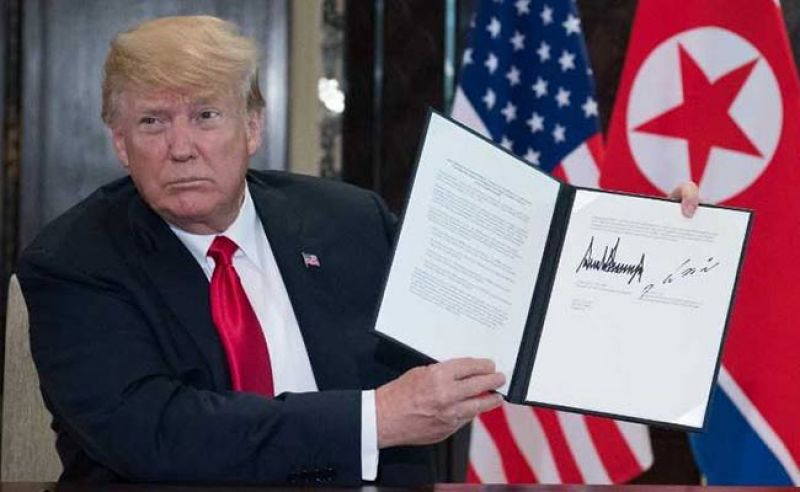 11:01 am: A lot of progress. Really, very positive, I think better than anybody could have expected, top of the line, really good,’ Trump says, adding ‘we're going right now for a signing’, reports news agency AFP.

10:16 am: US president Donald Trump expects 'signing' with Kim Jong Un after the summit, reports Reuters.

10:10 am: Donald Trump hails 'really fantastic' meeting with Kim, says 'a lot of progress' made.

09:42 am: "I think the entire world is watching this moment. Many people in the world will think of this as a scene from a fantasy, science-fiction movie," said Kim Jong Un after meeting US president Donald Trump.

09:30 am: After their bilateral meeting at the Capella hotel in Singapore's Sentosa island, Trump and Kim met for a working lunch along with their aides. As the two men entered the room, photographs were taken, with Trump joking about wanting to get a "beautiful picture" in which he looked good, news agency PTI reported.

The working lunch which had a mix of Western and Asian dishes, such as Korean stuffed cucumber and beef short rib confit with some Haagen-Dazs ice cream to top things off.

07:55 am: US President Donald Trump and North Korean leader Kim Jong Un go into a second meeting joined by key aides, after 48-minute one-on-one talks with only their interpreters, reports news agency AFP. 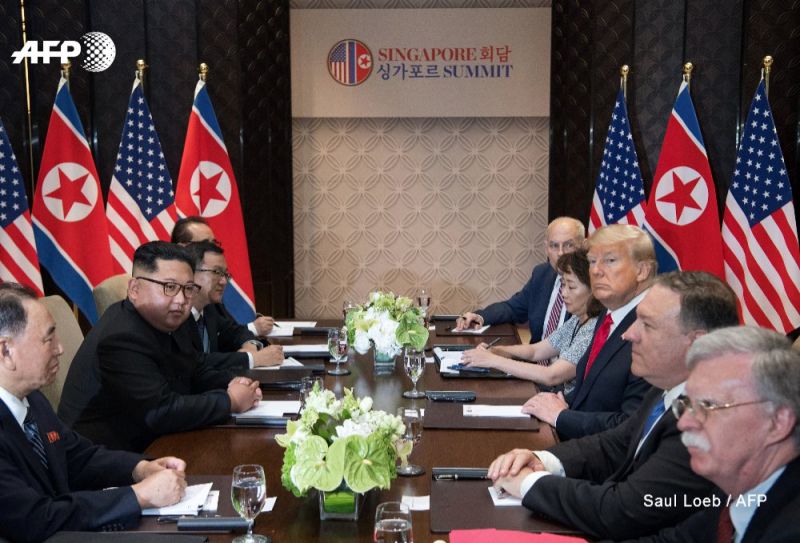 07:40 am: "We overcame all kinds of skepticism and speculation about this summit and I believe that this is good for the peace", says Kim Jong Un after meeting Trump.

07:35 am: After the one-on-one talks that lasted over 40 minutes, Donald Trump said the meeting with the North Korean leader was 'very, very good,' and that both the countries have an 'excellent relationship.' He also predicted that the Kim Jong and he 'will solve a big problem, a big dilemma.'

Both the leaders walked together along the balcony after the meeting. "Working together, we will get it taken care of," Trump said after the meet, reports news agency AP. 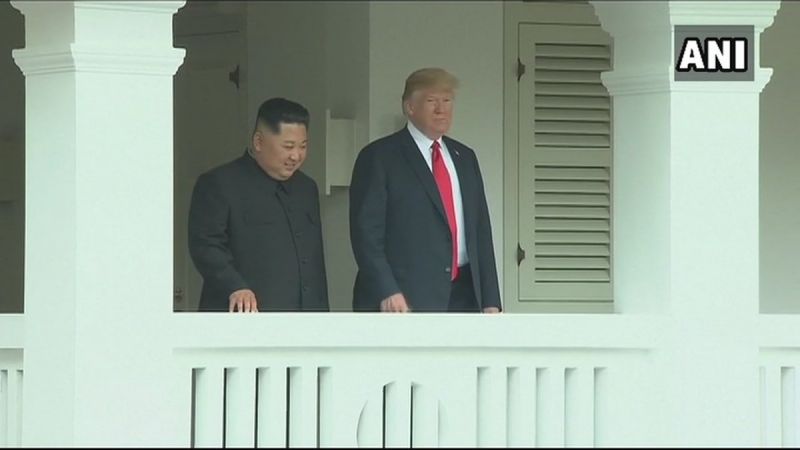 07:30 am: The first meeting between North Korea's Kim Jong Un and US president Donald Trump ends. The two held discussions for less than an hour.

07:10 am: This is the first time when we are seeing the American and North Korean flags together. The two countries have been on opposing sides since the Korean War in 1950, when the North invaded South Korea. 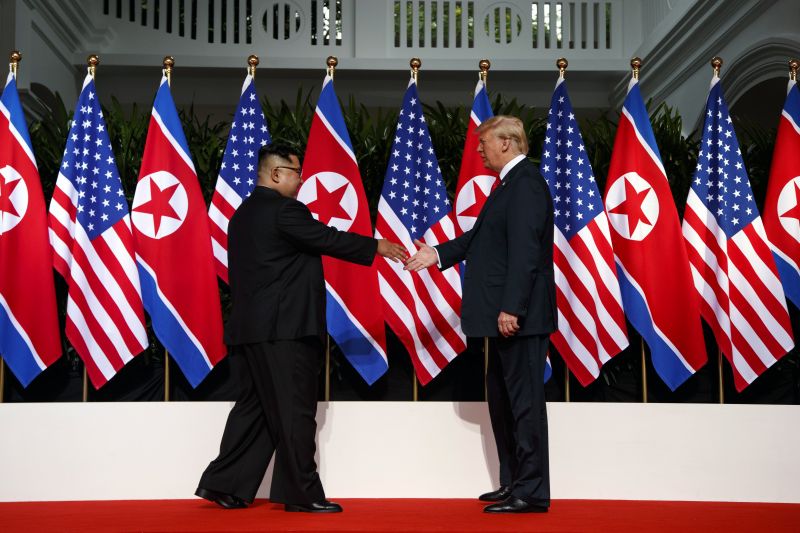 06:59 am: Trump and Kim Jong are holding one on one meeting. 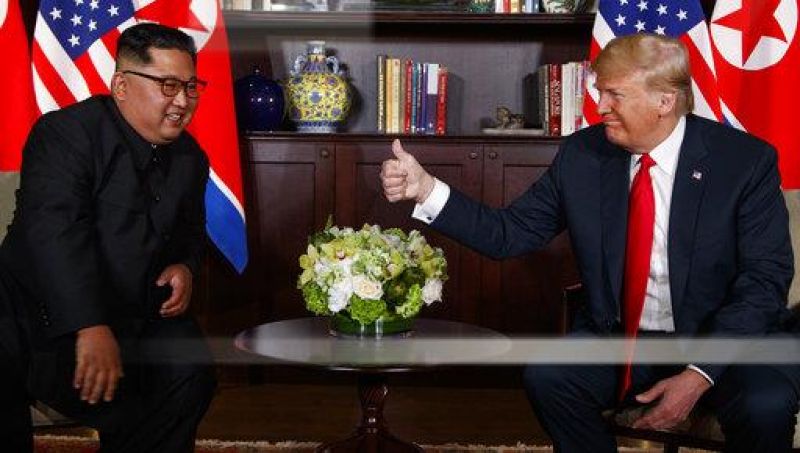 06:57 am: As the summit begins, US President Donald Trump predicts he will have a 'great relationship' with Kim Jong Un while the North Korean leader says "we came here after overcoming" all the obstacles, reports news agency AP.

06:45 am: The two leaders walk together along colonnade to begin private meeting with their interpreters. 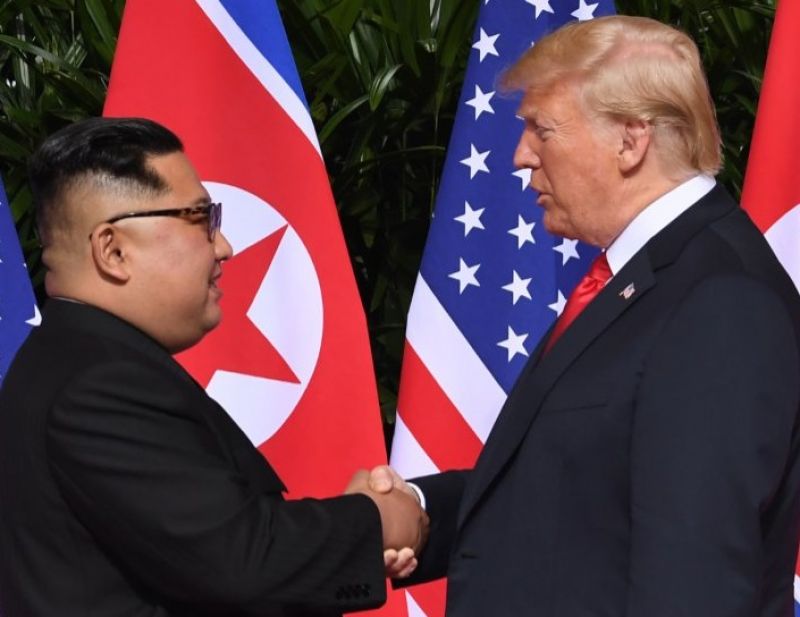 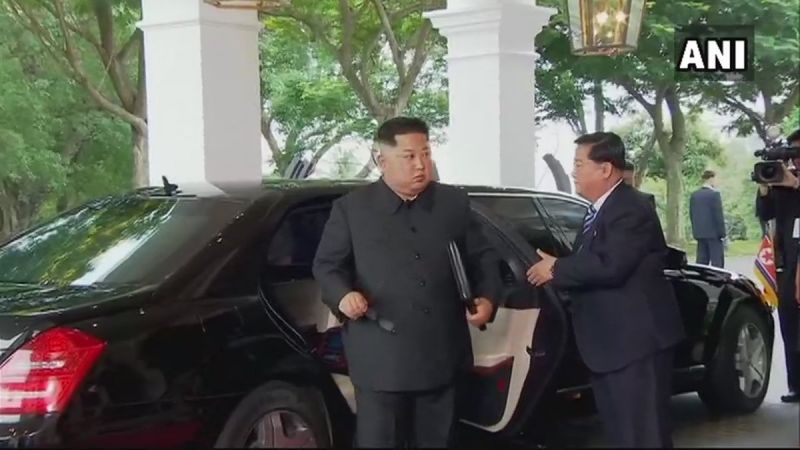 05:55 am: Donald Trump arrives at Capella Hotel on Singapore’s Sentosa Island, a resort island off Singapore’s port with luxury hotels. 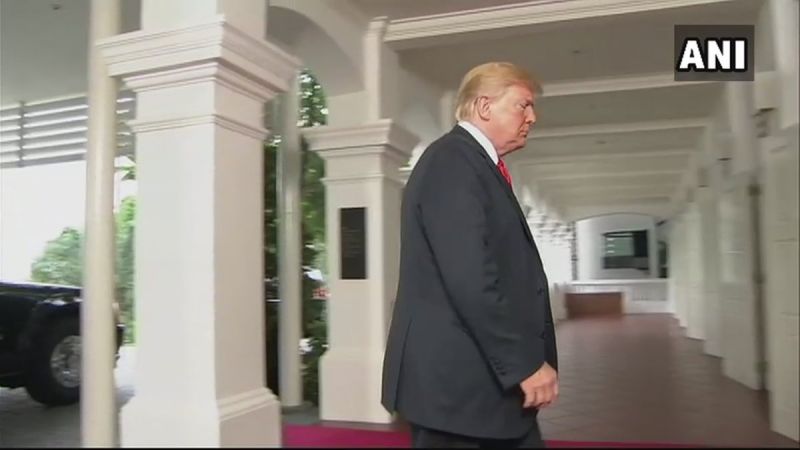