With 89 percent of the vote counted early on Tuesday morning, Duterte had an insurmountable lead of 5.92 million votes over his nearest rival.

Manila: Anti-establishment firebrand Rodrigo Duterte stormed to a huge win in the Philippine presidential elections, according to poll monitor data released Tuesday, after an incendiary campaign dominated by his profanity-laced vows to kill criminals.

Duterte, the longtime mayor of the southern city of Davao, hypnotised millions with his vows of brutal but quick solutions to the nation's twin plagues of crime and poverty, which many believed had worsened despite strong economic growth in recent years.

And after a record turnout of voters in Monday's elections, Duterte scored a commanding victory, according to data released by the PPCRV, a Catholic Church-run poll monitor accredited by the government to tally the votes. 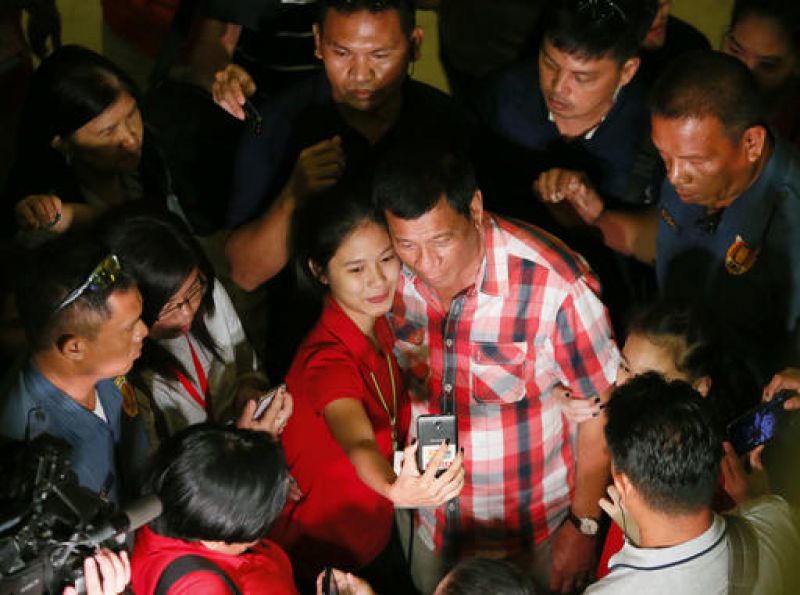 A female supporter of Rodrigo Duterte takes a selfie with him after the poll monitor showed the firebrand leader well ahead in the race.

With 89 percent of the vote counted early on Tuesday morning, Duterte had an insurmountable lead of 5.92 million votes over his nearest rival, administration candidate Mar Roxas, according to the data.

Read: From Viagra to rape jokes, Philippines presidential favourite does a Trump

"It's with humility, extreme humility, that I accept this, the mandate of the people," Duterte told AFP as the results came in, adding his law and order platform was the key to his success.

"What I can promise you is that I will do my very best not just in my waking hours but even in my sleep."

Duterte had 38.65 percent of the vote, with Roxas on 23.16 percent and Senator Grace Poe in third with 21.71 percent, according to PPCRV. In the Philippines, a winner is decided simply by whomever gets the most votes.

Poe, the adopted daughter of movie stars, had already conceded just after midnight on Tuesday.

"As a staunch supporter of electoral reform, I have a firm belief in the voice and sentiment of our people. I honour the result of our elections," Poe told reporters in Manila.

"I congratulate Mayor Rodrigo Duterte and pledge my support in working to heal our land and to unite our people toward the continued development of our country."

Duterte, a pugnacious 71-year-old, surged from outsider to the top of surveys with cuss-filled vows to kill tens of thousands of criminals, threats to establish one-man rule if lawmakers disobeyed him and promises to embrace communist rebels.

He also boasted repeatedly about his Viagra-fuelled affairs, while promising voters his mistresses would not cost a lot because he kept them in cheap boarding houses and took them to short-stay hotels for sex.

Duterte caused further disgust in international diplomatic circles with a joke that he wanted to rape a "beautiful" Australian missionary who was killed in a 1989 Philippine prison riot, and by calling the pope a "son of a whore".

Departing President Benigno Aquino, whose mother led the democracy movement that ousted Ferdinand Marcos three decades ago, had warned repeatedly the nation was at risk of succumbing to another dictatorship.

"I need your help to stop the return of terror in our land. I cannot do it alone," Aquino said in an appeal to voters in a final rally on Saturday in Manila for Roxas, his preferred successor and fellow Liberal Party stalwart.

In his final rally on Saturday, Duterte repeated to tens of thousands of cheering fans his plans to end crime within six months of starting his presidency.

"Forget the laws on human rights," said Duterte, who has been accused of running vigilante death squads in Davao.

'Sulli Deals', form of hate speech in India, must be condemned: UN official

Indonesia starts COVID boosters for elderly, others at risk