Govt doesn’t care about us: Outrage after Sikhs, Hindus die in Jalalabad attack

Jalalabad (Afghanistan): Grief mixed with anger among Afghanistan's minority Sikh and Hindu community on Monday as they prepared for funerals of loved ones, including an election candidate, killed in a suicide attack.

At least 19 people were killed and 21 wounded when a suicide bomber blew himself up in a crowd of Afghan Sikhs and Hindus waiting to meet President Ashraf Ghani in the eastern city of Jalalabad on Sunday.

Read: 19 dead in Afghan suicide attack, most were Sikhs and Hindus: Officials

Scores of mourners shouted "death to Ashraf Ghani" and "death to the government" as they placed coffins in ambulances that would take them to a temple for funeral ceremonies.

Among the dead were 17 Sikhs and Hindus, officials said, including Avtar Singh, the only Sikh candidate running in the October 20 legislative elections, and Rawail Singh, a prominent social activist.

Avtar Singh Khalsa would have been the first Sikh in Afghan parliament this Oct. Deeply saddened. He was martyred in a cowardly terror attack. An ecosystem which utilizes terror as an instrument to achieve different objectives is in & of itself doomed to fail. (1/4) pic.twitter.com/zTO9rY0LRC

"This attack has killed many of our elders, those who loved their country more than anything else," Narendar Singh told AFP as he took the body of his father, Avtar Singh, from the hospital.

"We were the direct target. The government really does not care about us. We used to be a huge community but most of us have left."

Around 1,000 Sikhs and Hindus are estimated to reside in what is otherwise an overwhelmingly Muslim nation.

The vast majority live in Jalalabad as well as the southeastern city of Ghazni and the Afghan capital Kabul.

ISIS claimed responsibility for the attack, the latest carried out by the terrorists in the restive province where they have a foothold.

Ghani was in Jalalabad on Sunday as part of a two-day visit to the province. He was not harmed.

Singh said a group of 20 Sikhs and Hindus had planned to meet with Ghani in the morning at the provincial governor's compound but the meeting was postponed until the afternoon.

As their convoy neared the compound, they were stopped by security forces and ordered to get out of their cars to be checked.

"That is when a suicide bomber on foot detonated among us," Singh said.

Jagandar Singh, who lost his brother in the attack, said the mourners would consider taking to "the streets in Kabul" to express their anger at the government's inability to protect civilians. 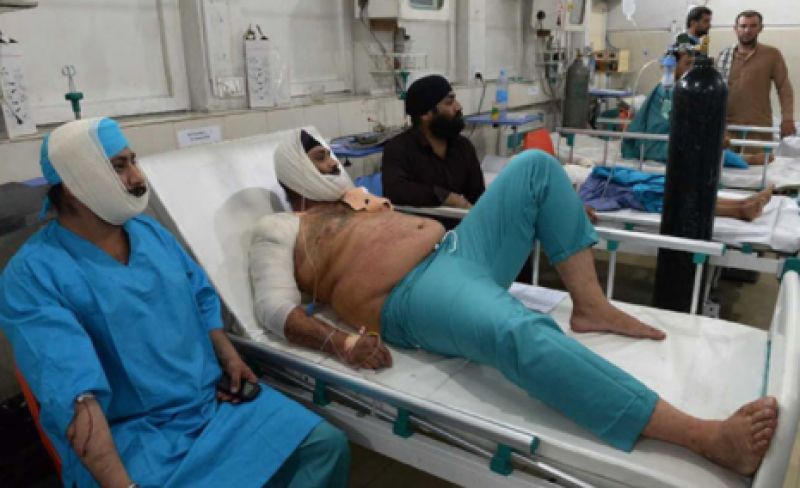 Around 1,000 Sikhs and Hindus are estimated to reside in what is otherwise an overwhelmingly Muslim nation (Photo: AFP)

"We have lost hope with this government," he said.

"Muslims, Hindus and Sikhs are all brothers but unfortunately under this government none of them is safe."

ISIS was not part of the government's recent 18-day ceasefire with the Taliban that expired on Friday.

The government's unilateral truce overlapped with the Taliban's three-day ceasefire for Eid. It was marred by two suicide attacks in Nangarhar that were claimed by ISIS.