US goes after Venezuela’s oil firm

Washington: The US announced sanctions against Venezuela’s state oil company on Monday in a coordinated effort with the main Opposition leader to cripple embattled President Nicolas Maduro’s power base.

The measures against state-owned PDVSA were presented as a way of preventing the Leftist strongman from looting the coffers in his economically ruined country before he is replaced by the man Washington says is the rightful interim president — Opposition leader Juan Guaido. “The purpose of sanctions is to change behaviour,” Treasury Secretary Steven Mnuchin told reporters at the White House. “So when there is a recognition that the company is the property of, the rightful rulers, the rightful leaders, then indeed that money will be available to Guaido.”

Guaido, who heads the National Assembly legislature and has named himself acting president, issued a statement, saying he was taking “orderly control of our republic’s assets abroad” to prevent a departing Maduro from trying “to empty the coffers.” 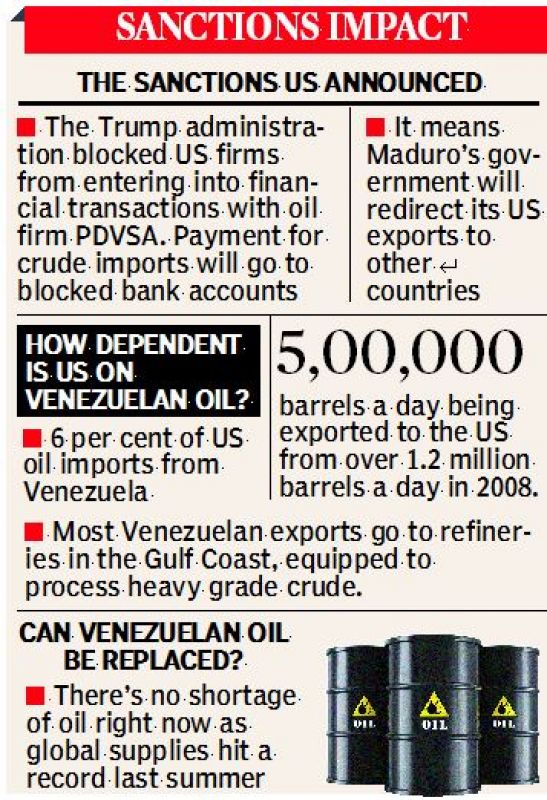 Venezuela was once a Latin American success story and has the world’s largest oil reserves, but has been driven into the ground during years of hardline Leftist rule.

With millions short of food and other basic resources, there is widespread discontent. How-ever, so far, Maduro has retained the backing of the powerful armed forces, as well as support from Russia and China.

Washington has moved decisively to seek the exit of Maduro by recognising Guaido and urging the military to switch loyalties.

“We’ve seen Venezuelan official and military personnel heeding this call,” he added, citing the defection this weekend of the country’s military attache to Washington.

Bolton also would not rule out the use of US troops.

“The President has made it clear on this matter that all options are on the table,” he told reporters.

Getting coronavirus a blessing in disguise: Trump

Survey says Indian-Americans solidly behind Biden in US presidential election