Spicer while speaking about Modi’s visit to US said, “Well, first, I want to wish the people of India a happy 70th anniversary on their independence”.

The US press secretary was being asked about the similarity between the visions and ideas of both leaders; with Modi promoting the ‘Make in India’ campaign and Trump saying ‘Buy American,’ and make in America -- or ‘Hire American.’ 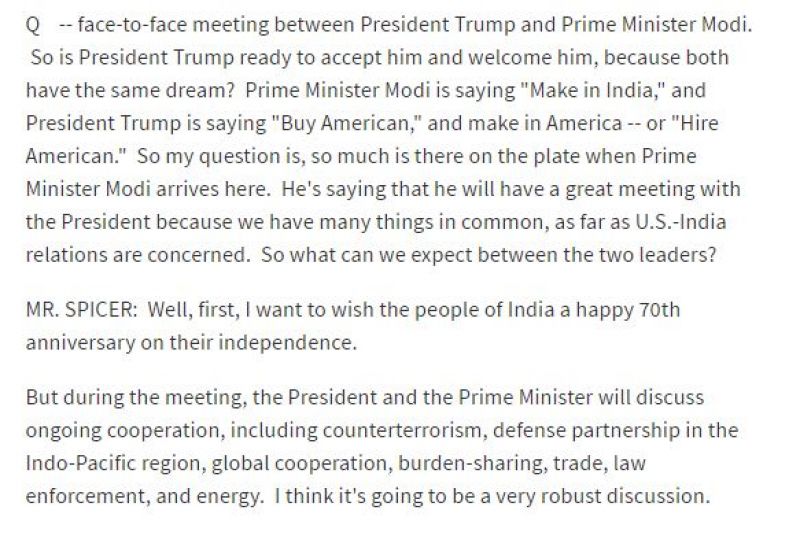 Unaware about the goof-up, Spicer continued answering, saying “But during the meeting, the President and the Prime Minister will discuss ongoing cooperation, including counterterrorism, defence partnership in the Indo-Pacific region, global cooperation, trade, law enforcement, and energy.  I think it's going to be a very robust discussion”.

Prime Minister Modi is on two day state visit to US to meet Trump, wherein former will be hosted for a working dinner by latter. The issues speculated to be discussed between two leaders includes H-1B visa, hate crime and trade.

This is not the first time Spicer has used ‘alternative facts’, a term used by Counselor Kellyanne Conway to describe his previous faux pax. He had earlier ‘misled’ the press with the size of the crowd that participated during Trump’s inauguration this year in January.

According to official statement he made, Spicer had said, “This was the largest audience to ever witness an inauguration, period!” He had gone on to defend the claim saying, famously, “Sometimes we can disagree with the facts.”