Philadelphia: The Philadelphia home where Oscar-winning actress Grace Kelly grew up and accepted a marriage proposal from Prince Rainier III of Monaco in 1955 is now in the hands of the royal family.

Her son, Prince Albert of Monaco, has confirmed to People Magazine that he was the recent purchaser of the six-bedroom, 2.5-storey Colonial home in the city's East Falls section.

He said in an interview on the magazine's website posted on Friday that the house is "very special to our family." He said he was happy to have saved it "from a near certain death or development."

The property last made headlines in 2014 when its 81-year-old former owner pleaded no contest to animal cruelty charges for keeping cats and dogs in unsanitary conditions. Officials with the Pennsylvania Society for the Prevention of Cruelty to Animals seized 15 cats from the home and found the remains of several others. The owner had lived in the large brick house since 1973.

The prince told the magazine he planned to visit Philadelphia on Tuesday as he considers plans for the home.

"We're still trying to figure out what we're going to do with it," he said. "We're looking at having it contain some museum exhibit space and maybe use part of it for offices for some of our foundation work." 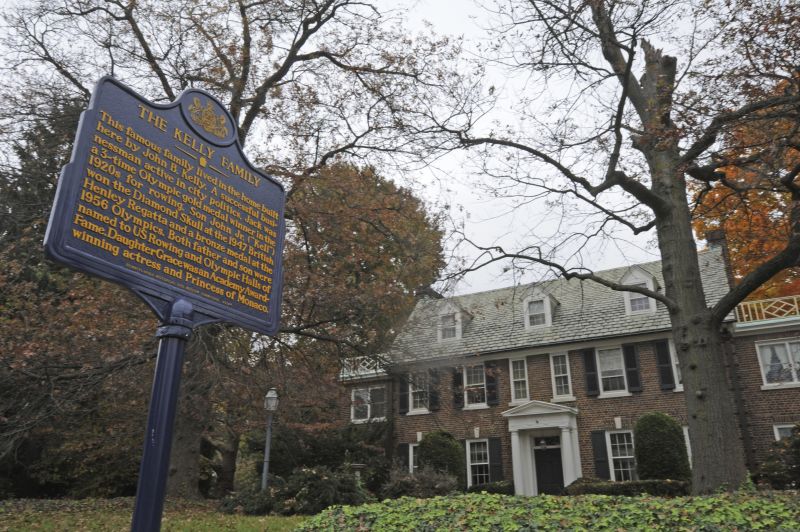 The Philadelphia home where Oscar-winning actress Kelly grew up and accepted a marriage proposal from Prince Rainier III of Monaco in 1955 is now in the hands of the royal family. (Photo: AP)

The home was built in 1935 by Kelly's father, John B. Kelly. He was a three-time Olympic gold medal-winning rower in the 1920s and later a prominent businessman active in Philadelphia politics. A sign posted outside designates the structure as a Pennsylvania historical landmark.

The estate sits on a 0.69-acre (0.279-hectare) parcel that features gardens and a private backyard. Inside, the home boasts a formal paneled dining room, finished basement and a barroom.

Grace Kelly left Philadelphia at age 20 for Hollywood, but remained adored by Philadelphians through the years. The city mourned after Princess Grace died in 1982 from injuries she suffered in an automobile crash in France that involved her teenage daughter. She was 52.

Once asked about memories growing up in Philadelphia, Kelly recalled walking along the Wissahickon Creek in Fairmount Park, saying it was her "greatest treat."

Prince Albert said he has early memories of visits to the home, such as staring out an upstairs window or rolling around on the living room carpet.

"The house is filled with little moments like that. Moments of being a family," he said.

The father of two told the magazine that he can't wait to make new memories in the home with his own children, twins Prince Jacques and Princess Gabriella.

"I'm looking forward to showing the house to the kids, sharing it with them, having them see the garden. It'll probably be next year. We'll have to finish the work and then we'll have some sort of opening," he said.

Al-Qaeda chief Zawahiri killed in US drone strike in Kabul

US sanctions Russia for 'beginning' invasion of Ukraine