Boeing yet to submit 737 Max fix; says US Aviation regulator

Elwell said the FAA sent Boeing additional questions about its proposed fixes for the MAX planes, which caused the delay. (Photo:AP)

Washington: The US's aviation regulator has still not received Boeing's proposed fix for its 737 MAX aircraft, which have been grounded globally following two deadly crashes, the agency's chief said on Wednesday.

Boeing has said it will patch the Maneuvering Characteristics Augmentation System (MCAS) stall prevention system, which has been blamed for the two crashes in Indonesia and Ethiopia that killed a total of 346 people and caused the best-selling planes to be taken out of service.

Boeing said last week that it had finished making changes requested by the US Federal Aviation Administration (FAA), but the agency's interim chief Dan Elwell told reporters the agency hadn't yet seen the fixes.

"We are still waiting for Boeing to formally submit the software for approval," he said on the sidelines of a summit of global aviation regulators in Fort Worth, Texas.

Elwell said the FAA sent Boeing additional questions about its proposed fixes for the MAX planes, which caused the delay.

The summit set to begin Thursday will see the FAA attempt to re-establish trust with aviation regulators from 33 countries including China, Canada, the European Union, Ethiopia and Indonesia.

The regulator called the summit to walk through the steps taken to address concerns with the MAX aircraft after it was criticized for dragging its feet on ordering the jets grounded. 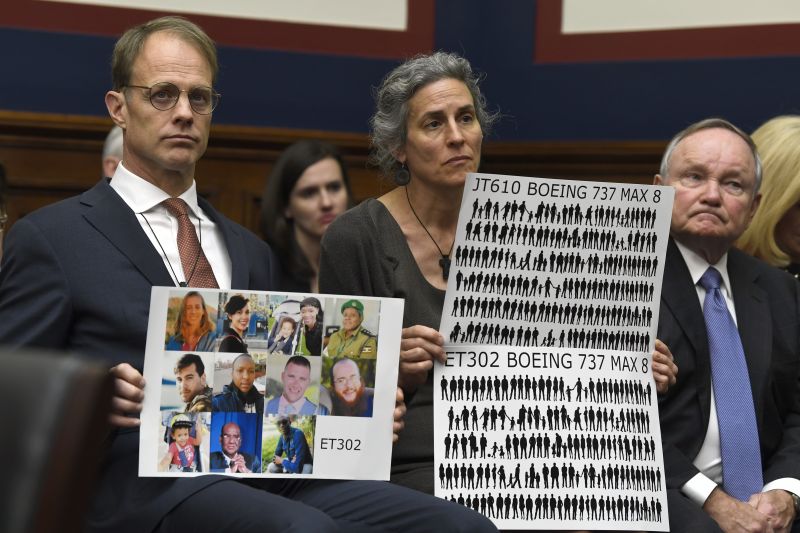 Michael Stumo, left, and Nadia Milleron, center, parents of Samya Stumo, 24, a Massachusetts resident who died in the Ethiopian plane crash, listen during a House Transportation Committee hearing on Capitol Hill in Washington, Wednesday, May 15, 2019, on the status of the Boeing 737 MAX aircraft. (AP Photo/Susan Walsh)

Canadian and American regulators have differed on the proper training for the 737 MAX 8, with Canada insisting pilots train in a flight simulator and the US saying a training course on a computer or iPad is enough.

"We haven't determined the final training yet," Elwell said.

Two American carriers -- Southwest and American -- have announced plans to restart flights on their MAX aircraft from August in hopes the fix will be completed by then.

The FAA chief added that he couldn't say when the jet would be back in the air, blaming the recent delay.

"It takes as long as it takes to be right," Elwell said. "We need to be the first to lift the prohibition."

Why the world is frightened: Half of Wuhan’s population of 11 million are migrants

Death spreads to Beijing as coronavirus toll mounts to 106

Supreme leader of Iran not so supreme lately: Trump