‘Why didn’t they vote?’: Trump criticises women-led protests on Twitter

Washington: President Donald Trump took to Twitter early on Sunday to needle the estimated two million people who marched in women-led mass protests against him a day earlier, including celebrities who took part.

“Watched protests yesterday but was under the impression that we just had an election! Why didn’t these people vote? Celebs hurt cause badly,” Trump tweeted.

A second, more formally worded, missive followed an hour later in which the Republican leader stressed that he respected the right to demonstrate. 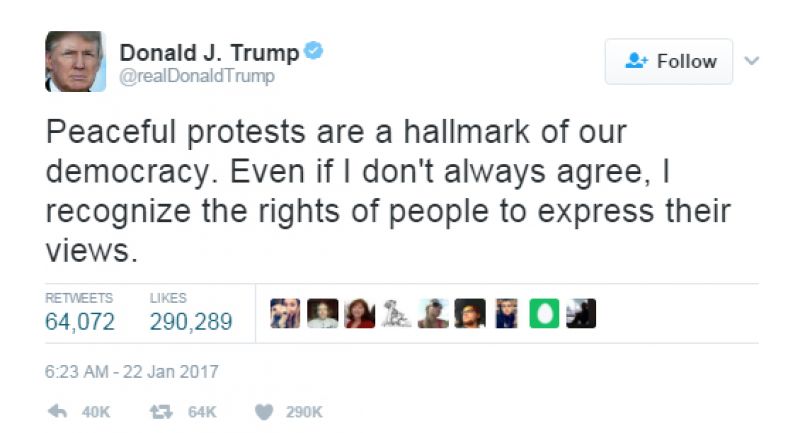 There was no official crowd count for the largest march, in Washington, but organizers told AFP they were confident it drew one million people, protesting any rollback of the rights of women, immigrants and minorities under Trump’s presidency.

At least a million people marched in other US cities, according to a tally of official counts for 15 major demonstrations compiled by CNN.

That figure did not include the many smaller sister marches held across the country and worldwide, which organisers numbered at over 600.

The scale of the mass protests highlights the depth of resistance to the former reality TV star, two days after he was sworn in as president with an approval rating of just 37%.

Pop diva Madonna made an unannounced appearance on Saturday in Washington, joining hundreds of thousands of protesters who rallied for women’s rights in defiance of Trump.

US cautions its citizens against travelling to Sri Lanka

US announces 1.5-year extension for some expiring immigrant work permits

US: Over 130,000 Russian troops now staged outside Ukraine