Melania Trump and Ivanka Trump both told him in private conversations that he had a problem that needed to be addressed, a White House official said. (Photo: File/AP)

Washington: US President Donald Trump's abrupt reversal in a volatile immigration crisis resulted from pressure by close family members, friends and lawmakers who urged him to climb down from a deeply unpopular hardline policy.

As recently as Monday, Trump was vowing to stick to a policy that led to children being separated from their parents when they crossed illegally into the United States from Mexico.

He tried to blame Democrats, saying they had failed to work with Republicans on immigration and accusing them of wanting illegal immigrants to "pour into and infest our country".

But the collective pressure from people in Trump's inner circle was intense, especially from his wife, Melania Trump, and eldest daughter, Ivanka Trump, and it finally persuaded him to back down, sources familiar with the situation said.

Privately, Trump understood that he was facing a huge political problem, and he was keenly aware of negative news coverage, watching TV at times on a television in the small dining room adjacent to the Oval Office, a source close to him said.

Melania Trump and Ivanka Trump both told him in private conversations that he had a problem that needed to be addressed, a White House official said.

As the searing images from the border dominated media coverage, Melania Trump got more vocal with her husband in the last couple of days, telling him words to the effect: "This isn't working out very well," the official said.

Fielding phone calls from a wide-ranging network of friends and allies, Trump also was urged to fix the problem because it was hurting him politically.

"The optics were terrible for him," said one of those friends. "It was the consistent number of people telling him it was a problem. It wasn't like he talked to one person. It was everybody. There was nobody saying this isn't a problem." 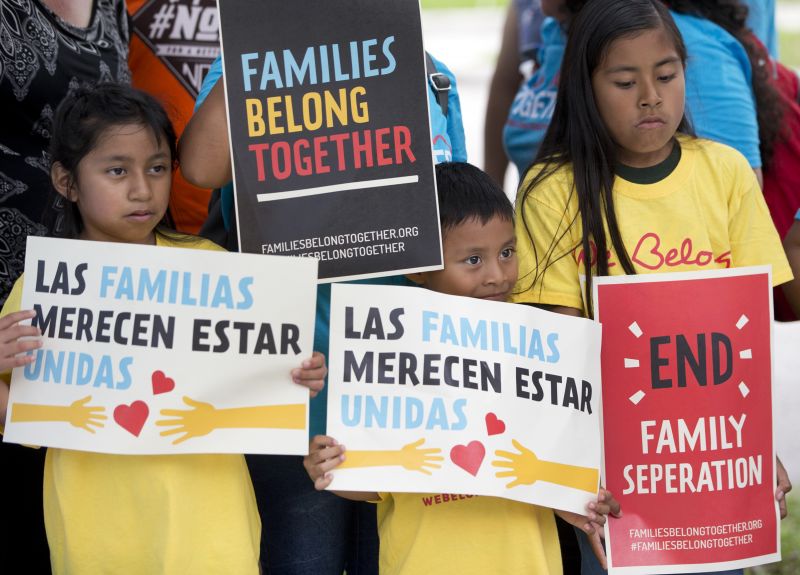 Separation of migrant children from parents led to public outrage, both in the US and abroad.

On Wednesday morning, Trump gathered top White House aides, along with Homeland Security Secretary Kirstjen Nielsen, in the Oval Office to discuss the problem and tell them he wanted it resolved.

The official said the message aides were left with coming out of the meeting from Trump was this: "Fix it."

"Let's find a way to fix this until we can get Congress. Let's work with them and figure it out," the official said in describing Trump's message.

A source familiar with the situation said the failure of a legislative fix on Tuesday on Capitol Hill also prompted Trump to switch positions. A whip count of lawmakers made clear leaders were short of the votes needed to get legislation through the House of Representatives, the source said.

Evangelical groups that support Trump as well as the Catholic bishops were among the key voices in the chorus of people urging a solution. In an interview with Reuters on Wednesday, Pope Francis criticized the administration policy, saying populism is not the solution to the immigration problem.

Fly creates buzz at US vice presidential debate - and online

Getting coronavirus a blessing in disguise: Trump