Charles Manson, US cult leader who ordered his followers to kill, dies at 83

Charles Manson, the psychopathic guru who masterminded a savage killing spree in the US in the late 1960s, has died aged 83. (Photo: AFP)

Los Angeles: Charles Manson, the hippie cult leader who became the hypnotic-eyed face of evil across America after orchestrating the gruesome murders of pregnant actress Sharon Tate and six others in Los Angeles during the summer of 1969, died Sunday after nearly a half-century in prison. He was 83.

Manson, whose name to this day synonymous with unspeakable violence and madness, died of natural causes at Kern County hospital, according to a California Department of Corrections statement.

A petty criminal who had been in and out of jail since childhood, the charismatic, guru-like Manson surrounded himself in the 1960s with runaways and other lost souls and then sent his disciples to butcher some of LA’s rich and famous in what prosecutors said was a bid to trigger a race war — an idea he got from a twisted reading of the Beatles song “Helter Skelter”.

The slayings horrified the world and, together with the deadly violence that erupted later in 1969 during a Rolling Stones concert at California’s Altamont Speedway, exposed the dangerous, drugged-out underside of the counterculture movement and seemed to mark the death of the era of peace and love.

Despite the overwhelming evidence against him, Manson maintained during his tumultuous trial in 1970 that he was innocent and that society itself was guilty.

“These children that come at you with knives, they are your children. You taught them; I didn’t teach them. I just tried to help them stand up,” he said in a courtroom soliloquy. 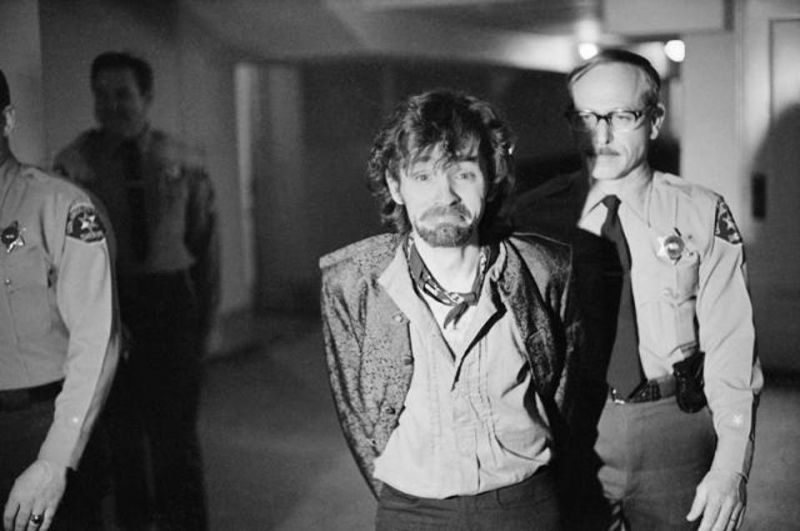 Charles Manson reacts to photographers as he goes to lunch after an outbreak in court that resulted in his ejection, along with three female co-defendants, in the Sharon Tate murder trial. (Photo: AP File)

The Manson Family, as his followers were called, slaughtered five of its victims on August 9, 1969, at Tate’s home: the actress, who was 8½ months pregnant, coffee heiress Abigail Folger, celebrity hairdresser Jay Sebring, Polish movie director Voityck Frykowski and Steven Parent, a friend of the estate’s caretaker. Tate’s husband, “Rosemary’s Baby” director Roman Polanski, was out of the country at the time.

The next night, a wealthy grocer and his wife, Leno and Rosemary LaBianca, were stabbed to death in their home across town.

The killers scrawled such phrases as “Pigs” and “Healter Skelter” (sic) in blood at the crime scenes.

Three months later, a Manson follower was jailed on an unrelated charge and told a cell mate about the bloodbath, leading to the cult leader’s arrest.

In the annals of American crime, Manson became the embodiment of evil, a short, shaggy-haired, bearded figure with a demonic stare and an “X’’ — later turned into a swastika — carved into his forehead.

“Many people I know in Los Angeles believe that the Sixties ended abruptly on August 9, 1969,” author Joan Didion wrote in her 1979 book “The White Album.”

After a trial that lasted nearly a year, Manson and three followers — Susan Atkins, Patricia Krenwinkel and Leslie Van Houten — were found guilty of murder and sentenced to death. Another defendant, Charles “Tex” Watson, was convicted later. All were spared execution and given life sentences after the California Supreme Court struck down the death penalty in 1972.

Atkins died behind bars in 2009. Krenwinkel, Van Houten and Watson remain in prison.

Another Manson devotee, Lynette “Squeaky” Fromme, tried to assassinate President Gerald Ford in 1975, but her gun jammed. She served 34 years in prison.

Manson was born in Cincinnati on November 12, 1934, to a teenager, possibly a prostitute, and was in reform school by the time he was 8. After serving a 10-year sentence for check forgery in the 1960s, Manson was said to have pleaded with authorities not to release him because he considered prison home.

“My father is the jailhouse. My father is your system,” he would later say in a monologue on the witness stand. “I am only what you made me. I am only a reflection of you.”

He was set free in San Francisco during the heyday of the hippie movement in the city’s Haight-Ashbury section, and though he was in his mid-30s by then, he began collecting followers — mostly women — who likened him to Jesus Christ. Most were teenagers; many came from good homes but were at odds with their parents.

He had musical ambitions and befriended rock stars, including Beach Boy Dennis Wilson. He also met Terry Melcher, a music producer who had lived in the same house that Polanski and Tate later rented.

By the summer 1969, Manson had failed to sell his songs, and the rejection was later seen as a trigger for the violence. He complained that Wilson took a Manson song called “Cease to Exist,” revised it into “Never Learn Not to Love” and recorded it with the Beach Boys without giving Manson credit.

Manson was obsessed with Beatles music, particularly “Piggies” and “Helter Skelter,” a hard-rocking song that he interpreted as forecasting the end of the world. He told his followers that “Helter Skelter is coming down” and predicted a race war would destroy the planet.

“Everybody attached themselves to us, whether it was our fault or not,” the Beatles’ George Harrison, who wrote “Piggies,” later said of the murders. “It was upsetting to be associated with something so sleazy as Charles Manson.”

Charles Manson is escorted to his arraignment on conspiracy-murder charges in connection with the Sharon Tate murder case. (Photo: AP File) 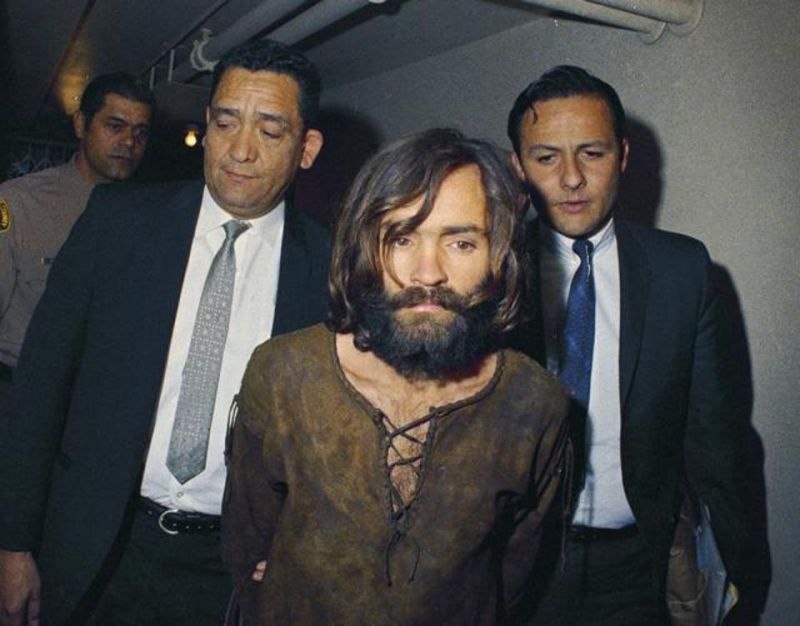 According to testimony, Manson sent his devotees out on the night of Tate’s murder with instructions to “do something witchy.” The state’s star witness, Linda Kasabian, who was granted immunity, testified that Manson tied up the LaBiancas, then ordered his followers to kill. But Manson insisted: “I have killed no one, and I have ordered no one to be killed.”

His trial was nearly scuttled when President Richard Nixon said Manson was “guilty, directly or indirectly.” Manson grabbed a newspaper and held up the front-page headline for jurors to read: “Manson Guilty, Nixon Declares.” Attorneys demanded a mistrial but were turned down.

From then on, jurors, sequestered at a hotel for 10 months, travelled to and from the courtroom in buses with blacked-out windows so they could not read the headlines on news stands.

Over the decades, Manson and his followers appeared sporadically at parole hearings, where their bids for freedom were repeatedly rejected. The women suggested they had been rehabilitated, but Manson himself stopped attending, saying prison had become his home.

The killings inspired movies and TV shows, and Manson prosecutor Vincent Bugliosi wrote a best-selling book about the murders, “Helter Skelter.” The macabre shock rocker Marilyn Manson borrowed part of his stage name from the killer.

“The Manson case, to this day, remains one of the most chilling in crime history,” prominent criminal justice reporter Theo Wilson wrote in her 1998 memoir, “Headline Justice: Inside the Courtroom — The Country’s Most Controversial Trials.”

“Even people who were not yet born when the murders took place,” Wilson wrote, “know the name Charles Manson, and shudder.”

US to require vaccines for all border crossers in January