A protestor sitting on the statue that they pulled down (Photo: Twitter)

New York: A statue of a topless, hoofed Hillary Clinton appeared outside a subway station Tuesday, prompting a tussle after one woman purposely knocked it down and sat on it to prevent others from picking it back up.

The display marked the second time a life-size, exaggerated depiction of a naked presidential nominee has surfaced outside a Manhattan subway stop during the general election campaign. In August, an artist's statue of an unclothed Donald Trump was eventually hauled away by city workers.

But the crowd's reaction to the naked Clinton was markedly different from that to the Trump statue, when a largely jovial group of onlookers took photos of it and posed for selfies. Some parts of the portly Trump's genitalia were visible in that statue.

On Tuesday, a woman can be seen on video taken by a reporter for the New York Daily News dragging the life-size structure of the Democratic presidential nominee to the ground, stomping on it and even sitting on top of it to prevent a man from standing it back up again.

"We shouldn't be treated this way. Period," another woman can be heard saying in the video.

It wasn't immediately clear who created the Clinton statue. An activist collective called INDECLINE was behind the naked Trump statue but said in a statement that it had no role in the Clinton one.

A police spokesman said the Clinton statue was eventually removed by whoever brought it to lower Manhattan, and no summonses or tickets were issued.

Representatives for Democratic Mayor Bill de Blasio, a Clinton supporter, haven't responded to questions about the statue. In August, a spokesman for the parks department issued a tongue-and-cheek statement in explaining that the statue of the Republican presidential nominee was removed because it was being displayed without a permit. 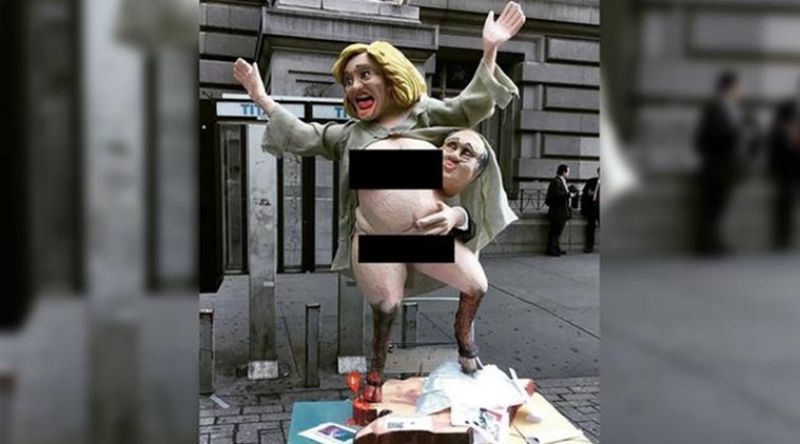 "NYC Parks stands firmly against any unpermitted erection in city parks, no matter how small," spokesman Sam Biederman said then.

The Clinton campaign didn't respond to a request for comment.

Carin Kuoni, a professor of contemporary art and political engagement at The New School, said the Clinton statue could be seen as offensive rather than satirical since women have been defined for years in culture, media and politics by how they look.

"The history of how the female body appears has clearly been so negatively coded and inscribed that it makes for a completely different intervention when you see the sculpture of a naked woman than when you see a naked man," she said.

Trump threatens to hold US funding for 'China-centric' WHO

US urges citizens to wear masks amid mounting death toll