United Nations:  Secretary-General Ban Ki-moon on Friday named Red, the starring animated character in the soon-to-be-released "The Angry Birds Movie" as an honorary UN ambassador to encourage young people to go "green" and step up action to tackle climate change.

The UN chief told a launch event attended by hundreds of young people in the General Assembly hall that "the Angry Birds have entertained millions of people around the world - and now they are part of making the world a better place." 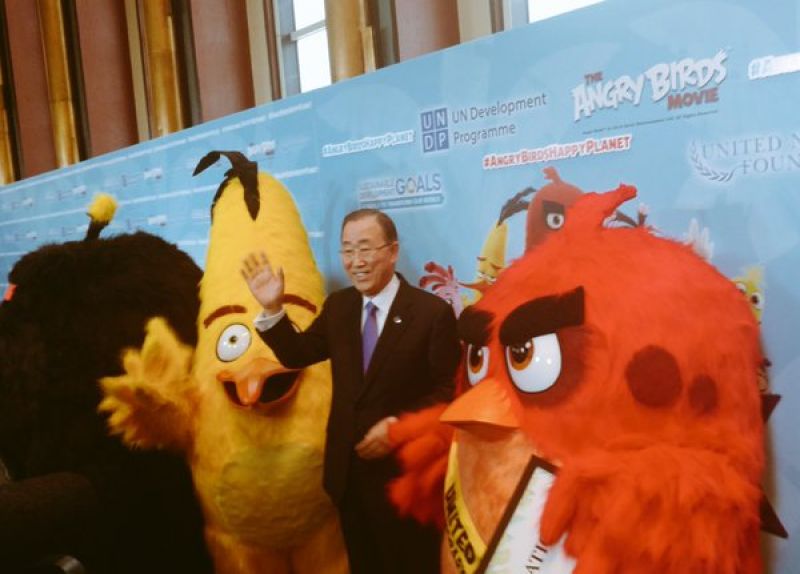 Ban said there was no better way to mark the International Day of Happiness on March 20 "than to have our animated ambassador raise awareness about the importance of addressing climate change to create a safer, more sustainable and happier future for all."

The campaign, in partnership with Sony Pictures Entertainment, the UN Development Program and UN Foundation, asks people around the world to make the Angry Birds happy by taking actions to combat climate change such as recycling, taking public transportation and conserving water.

Participants are asked to share their photos and commitments on social media platforms using the common hashtag #AngryBirdsHappyPlanet.

As part of his ambassadorial duties, the UN said Red will go on a "virtual world tour" starting March 21 to highlight various ways to combat climate change.

The tour will take him to Paris, where countries adopted a historic agreement to tackle climate change in December. It will end on April 22 at U.N. headquarters in New York when many world leaders are expected to sign the agreement.

Al-Qaeda chief Zawahiri killed in US drone strike in Kabul

US sanctions Russia for 'beginning' invasion of Ukraine