Cyclone Jawad forms over Bay of Bengal, close to the Vizag coast
World America 18 May 2019 Doctor in US univers ...
World, America

In all, more than 440 former students and university staff believed to have information related to allegations involving Strauss. (Representational Image)

Washington: An Ohio State University team doctor sexually abused at least 177 male students over nearly two decades and was never disciplined at the US school despite reports of his actions, an investigation found Friday.

Richard Strauss, who died in 2005, committed the abuse while employed at the school from 1978 to 1998, and university staff were made aware of claims as early as 1979, according to a 12-month independent probe.

The probe looked into misconduct allegations from 1979 to 1997 reported by former students -- 150 of whom reported first-hand accounts of sexual abuse committed by Strauss.

In all, more than 440 former students and university staff believed to have information related to allegations involving Strauss were interviewed for the investigation.

The victims included school athletes as well as other students who saw Strauss at the university health center and at an off-campus private medical office.

Strauss established the private medical office in 1996 after he was suspended from his activities as a treating physician at the school but remained a tenured faculty member. 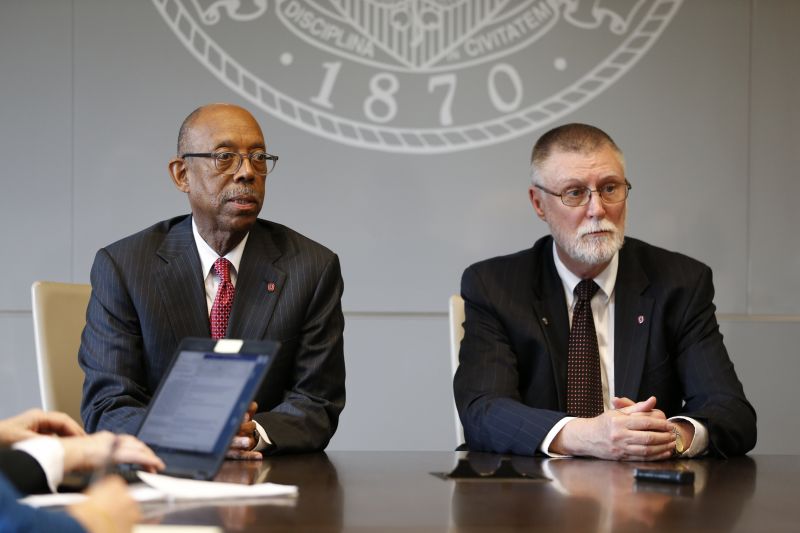 Ohio State University president Michael Drake, left, and provost Bruce McPheron answer questions during an interview about the accusations against former Ohio State team doctor Richard Strauss Friday, May 17, 2019, in Columbus, Ohio. An investigation found that Strauss sexually abused at least 177 athletes from at least 16 sports as well as others from his work at the student health center and his off-campus clinic. (AP Photo/Jay LaPrete)

University president Michael Drake said an independent investigation was launched into the allegations after they were brought to the university's attention last year.

"The findings are shocking and painful to comprehend," Drake said as he made the redacted investigation report public.

"On behalf of the university, we offer our profound regret and sincere apologies to each person who endured Strauss's abuse. Our institution's fundamental failure at the time to prevent this abuse was unacceptable -- as were the inadequate efforts to thoroughly investigate complaints raised by students and staff members."

The abuse, which included "excessive" genital exams and fondling, "escalated over time" as students underwent a series of examinations, according to the report.

"We find this range of acts 'abusive' because they exploited the power Strauss enjoyed purely by virtue of his status in the doctor-patient relationship," it said.

Perkins Coie, the law firm that conducted the investigation, said it is also examining whether Strauss may have examined students of high school age while serving at the university.

While Strauss resigned from university medical staff at the end of 1994, he remained on the faculty until retiring as professor emeritus in 1998, an honorary status the university is revoking.

The university is covering the costs of counseling for those affected by the abuse.

Drake said his school has implemented safeguards since Strauss's departure, including a sexual violence consultation team, a centralized anonymous hotline, mandatory reporting of sexual assault for all university employees and mandatory sexual prevention education for incoming students, faculty and staff.

"Issues of sexual misconduct and abuse challenge our society in real and important ways," he added.

"It is our collective responsibility to remain ever-vigilant and work to ensure that this can never happen again."