Washington: The first face-to-face meeting between U.S. President Donald Trump and German Chancellor Angela Merkel started awkwardly on Friday and ended even more oddly, with a quip by Trump about wiretapping that left the German leader visibly bewildered.

It's a well known fact that Donald Trump has never shied away from a handshake when it comes to greeting international leaders, and the "death-grip" memes galore are proof to that, however, German Chancellor Angela Merkel had a sticky moment with the U.S. President as besides not shaking her hand, he barely even made eye contact with her during the customary photo-op.

In a photo op after their Oval Office meeting, the two leaders sat next to each other in separate chairs. Merkel could be seen leaning towards Trump, who sat with his hands firmly locked between his knees, a very 'un-Trump' like gesture.

Merkel then appeared to ask the President if he wanted to shake hands, which is customary in photo ops, but Trump simply did not respond. He barely even looked at his German counterpart while quickly answering a few questions from the press.

Photographers: Can we get a handshake?
Merkel (to Trump): Do you want to have a handshake?
Trump: *no response*
Merkel: *makes awkward face* pic.twitter.com/ehgpCnWPg7

"You can actually pinpoint the second when her heart rips in half" pic.twitter.com/daQF1xBsgL

However, when asked to shake hands by reporters and photographers, Trump and Merkel remained stationary. It wasn't clear if the two heard the request, and the two had shaken hands when Merkel arrived at the White House and they shook hands again after a White House news conference, reports CNN

The two leaders shared different views on trade, Russia and immigration, leading to some uncomfortable moments at a joint news conference on Friday in which they took pains to downplay differences that were hard to mask.

Trump's tensed up body-language during the photo-op and his refusal to shake hands with Merkel has not gone down well across the globe, as he was chastised for the incidents and many branded his behaviors as rude and "un-President" like. 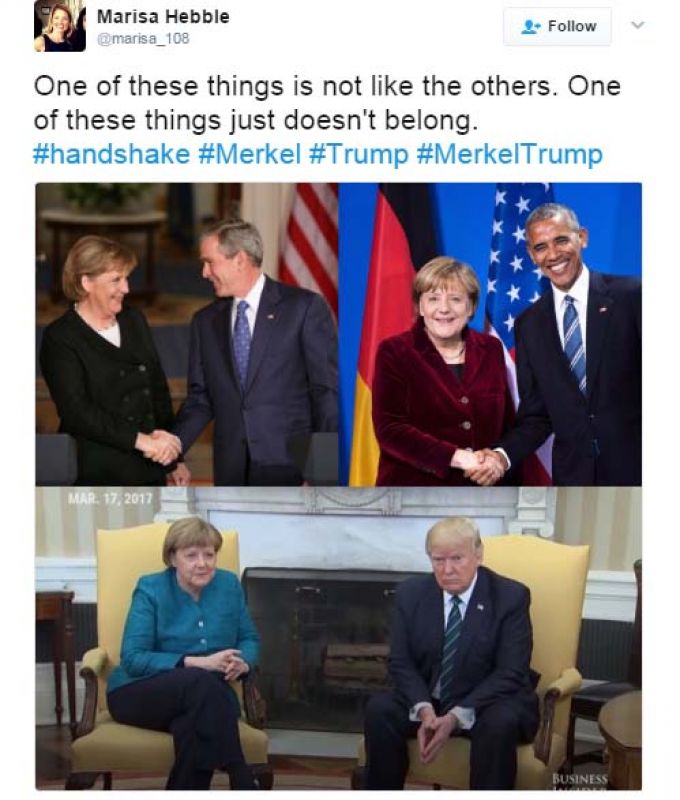 "Send a good picture back to Germany, make sure," Trump jokingly told photographers, adding that his meeting with the Chancellor was "very good" and said the pair talked about "many things."