New York: Boeing said Thursday that it completed its software update on the 737 MAX after two deadly crashes resulted in a global grounding of the aircraft.

The proposed fix, which addresses a problem with a flight handling system thought to be a factor in both crashes, must now win approval from US and international regulators before the planes can return to service.

"With safety as our clear priority, we have completed all of the engineering test flights for the software update and are preparing for the final certification flight," said Chief Executive Dennis Muilenburg said in a statement.

Also Read: The untold story of the Navy plane that drew a ‘giant penis’ in the sky

"The accidents have only intensified our commitment to our values, including safety, quality and integrity, because we know lives depend on what we do."

Boeing's announcement sent shares up 2.6 percent to $354.44 in afternoon trading. The halt to the 737 MAX has dented Boeing's revenues and clouded the company's earnings outlook. 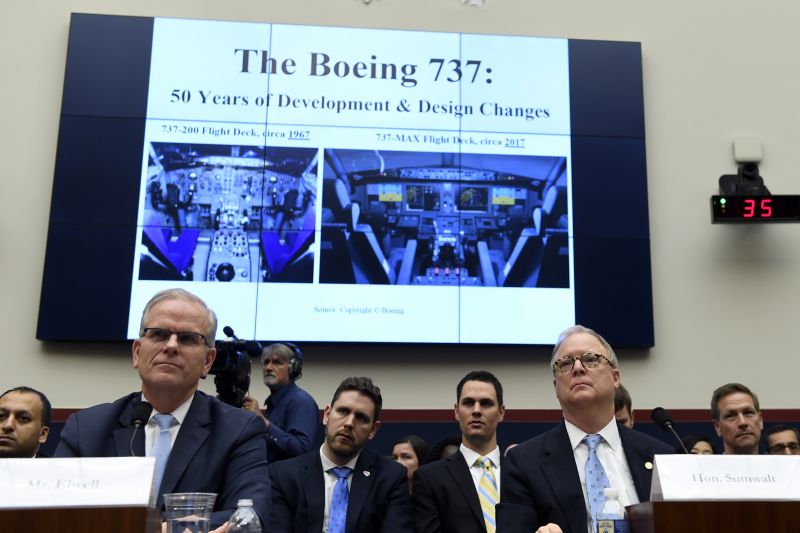 Daniel Elwell, front left, acting administrator of the Federal Aviation Administration, and Robert L. Sumwalt, front right, chairman of the National Transportation Safety Board, testify before a House Transportation Committee hearing on Capitol Hill in Washington, Wednesday, May 15, 2019, on the status of the Boeing 737 MAX aircraft. (AP Photo)

Boeing said it has flown 737 MAX with updated software for the Maneuvering Characteristics Augmentation System for more than 360 hours on 207 flights.

Boeing is providing additional information to the Federal Aviation Administration in anticipation of a certification test flight, a key step in winning regulatory approval, the company said.

In both the Lion Air and Ethiopian Airlines crashes, the MCAS pointed the plane sharply downward based on a faulty sensor reading, hindering pilot control after takeoff, according to preliminary crash investigations.

The FAA has called a May 23 meeting of international civil aviation regulators in Texas to discuss the FAA's process for clearing the 737 MAX to resume service.

Acting FAA Administrator Daniel Elwell told a congressional panel on Wednesday that he hopes the gathering builds support for international bodies to approve the 737 MAX soon after the United States gives it the green light.

Donald Trump rules out trade deal with India during his visit

Prosecutors have a ‘tale,’ not a case: Weinstein lawyer

Tweets make it ‘impossible’ to do job: Barr swipes at Trump