People take shelter behind trees from the high winds and rain as Irma approaches in Miami Beach (Photo: AFP)

Hurricane Irma pummeled the north coast of Cuba on Saturday, inflicting “significant damage” as millions of people in the US state of Florida hunkered down for a direct hit from the monster storm.

Irma’s blast through the Cuban coastline weakened the storm to a Category Three, but it is still packing 205 km per hour and was expected to regain power before hitting the Florida Keys early Sunday, US forecasters. Officials have ordered 6.3 million people to evacuate Florida.

At least 19 people have been killed since Irma began its devastating march through the Caribbean as a Category Five storm of nearly unmatched power, making landfall late Friday in Cuba on the Camaguey archipelago.

“What’s out there is terrible,” said Gisela Fernandez, a 42-year-old nurse, after the storm whipped the town in Chapara in the province of Las Tunas. “It’s finished raining, but all night long there were terrible

In Florida, cities on both the east and west coasts of the peninsular state took on the appearance of ghost towns, as nervous residents heeded insistent evacuation orders.

The storm’s forecast track has shifted slightly, so it now looks bound for Florida’s west Gulf coast instead of the Atlantic coast, with landfall expected Sunday morning in the Florida Keys.

But Irma is so wide that authorities were bracing for destructive storm surges on both coasts and the Keys, the chain of low-lying islands that stretch south of Miami toward Cuba. And hurricane-force winds are expected to lash the peninsula as it rolls north toward Georgia.

Floridians plan to ‘shoot down’ irma
Gun owners in Florida have vowed to “shoot at” the storm and have started an event on Facebook to “show Irma we shoot first”.

Thousands of people joined the event created by Ryon Edwards. Some seem to have taken the plan seriously. A Facebook user posted an image of himself holding a gun, along with the message: “I’m not going to sit around and wait, I’m going straight into the eye.”

Meanwhile, another Florida resident has started an event encouraging people to “shoot flames” at the storm, Independent reported. “Join me in this fight as we shoot flames at Hurricane Irma and dissipate her on the spot. She will burn,” the event description states. 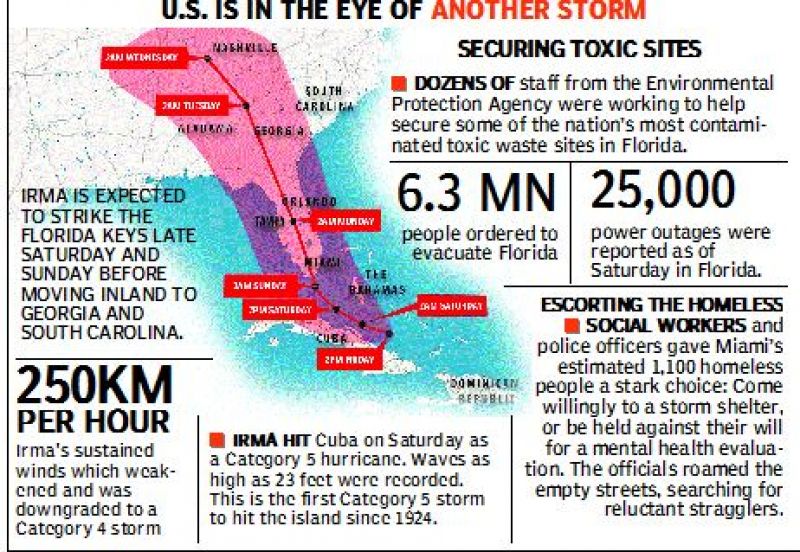 Category 4 Jose to follow Irma
Battered and weary after being pummelled by Hurricane Irma, terrified residents were on Saturday gearing up to face a second monster storm which was heading for the Caribbean.

“Return to the safest shelters before the hurricane arrives, and avoid areas which could flood,” police in the French part of St Martin pleaded, only three days after it was ravaged by Irma.

Jose, a Category Four storm, will bring heavy rains and winds of 130 to 150 km per hour, meteorologists said. But it is possible the storm could miss the islands of St Martin and St Barts when it hits later Saturday, and veer about 100 km to the north.

Many on St Martin, a popular tourist destination with vibrant nightlife and pristine beaches which is divided between France and The Netherlands, will be wondering where to go.

Irma left at least 12 dead and hundreds injured across the island, and with the clean-up barely begun, authorities are struggling to get aid to the stricken population.

US concerned by China's attempt to intimidate' neighbours: White House

US air travel still messy, with another 2,600 flights scrapped

Omicron sweeps across US, now 73 per cent of COVID-19 cases

Discussions underway for WHO approval for Corbevax COVID-19 vaccine